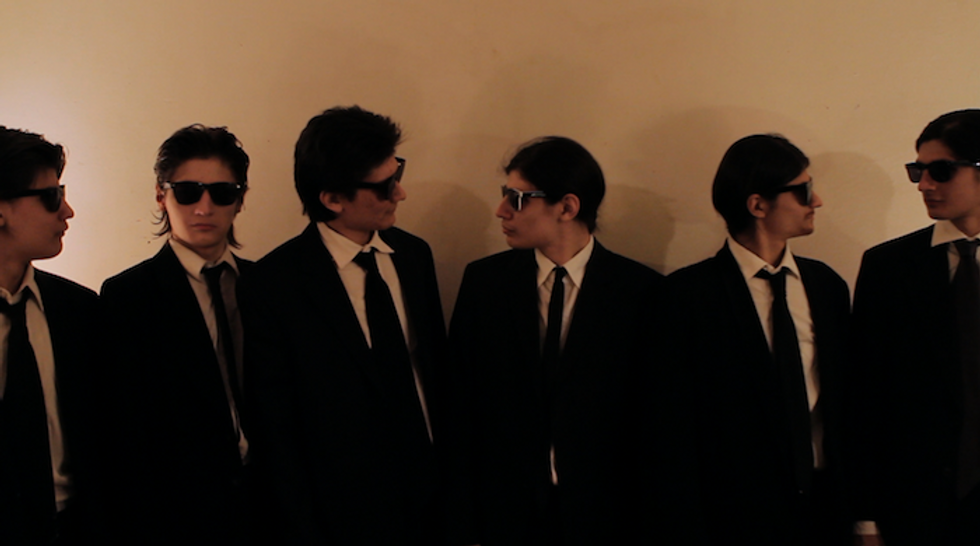 A Chat With The Wolfpack

by Abby Schreiber
PAPERMAG
The Angulo brothers in outfits inspired by Reservoir Dogs
In a film festival season with many bright spots, one of the brightest has to be The Wolfpack, Crystal Moselle's truly singular documentary about the six Angulo brothers who have lived nearly their entire lives locked inside a Lower East Side apartment with their parents and a sister, cloistered away from the city because of their father's suspicion and fear of the teeming urban society outside their doors. Spending years with only a handful of visits to the outside world (and sometimes none at all), the boys find diversion and escape in the movies, developing a passion for film that they nurture by re-enacting their favorite flicks line-by-line and scene-by-scene with homemade props and costumes. The brothers are smart, funny, articulate and it's the same combination of winning personalities and distinct looks (including strikingly long hair) that draws the viewer into their story much as it first drew Moselle.

Ahead of the film's premiere today, we had the chance to sit down with two of the brothers, Mukunda and Bhagavan, along with Moselle, to talk about their experiences filming the movie, how their lives have changed since and what it was like for the Angulos to recently meet their estranged extended family for the first time. You'll also be able to watch this family reunion and learn more about their story during tonight's episode of 20/20 on ABC.

Mukunda and Bhagavan, what do you remember of the first day you met Crystal?

Mukunda Angulo: We were all walking down 1st Ave and, from what I hear, she followed us and asked if we were all brothers. We all turned back and said, "Yeah," looked back away, and she goes, "Where are you from?" "We're from Clinton St, we're from Delancey St." And she's like, "Oh, I've never seen you there." And she's like, "What do you do? What are you interested in?" We started talking eventually and walking together, and we found out our common interest we all had was movies.

Crystal Moselle: Govinda said to me, "So what do you do for a living?" I said, "I'm a filmmaker." He said, "Oh, we're interested in getting into the business of filmmaking." I was like, "Cool, let's hang out, I can show you guys some cameras in the park or whatever."

MA: So it started out as a friendship. She would show us cameras, and sort of ask what we're into. She was the first person that actually really found us interesting and started digging into where we were from and saying things like, "Your appearance is very original; I've never seen anything like this." We weren't used to that. And we thought, "Oh, this person is different."

Crystal, at what point did you realize that the Angulos and their story would be a good documentary subject?

CM: I was filming them very early on, but it was more casual. I was doing this project where I was doing these portraits and little video interviews on New Yorkers, and I had them all come in and my friend said to me, "What is this? You have to continue following the story. There's something very interesting here." And I was like, "Yeah, you're right." And from that point I got a little more serious about filming them. But it wasn't for a year after that I really found out the backstory.

What was going through your minds, Mukunda and Bhagavan, when Crystal mentioned her idea of shooting your lives for a documentary?

Bhagavan Angulo: When she brought the idea to us, we were interested in it because we took it as, "OK, we want to be filmmakers, so this will probably be a way that we can get into it, because we're gonna learn a lot more on the way."

What did your parents think?

What about your dad?

MA: He didn't have much say in it, because he wasn't really into society or filmmaking, but he was like, "Do whatever." He agreed to be a part of it.

The Wolfpack Trailer. (Photo by aul Bruinooge/PatrickMcMullan.com)
What's life like for you guys now?

MA: We all have different jobs, but we're all coming together to put our production company together, Wolfpack Pictures. I'm working at another media production company -- I'm an on-set and off-set PA, office PA as well, and art director's assistant -- and I'm doing camera PA work, and I'm directing and shooting and writing out projects.

BA: I teach yoga, and I work at the Jivamukti Yoga Center in Jersey City. I'm also a full-time corps dancer at the Hip-Hop Dance Conservatory.

Do you still live at home?

Have you been getting a lot of offers from Hollywood people wanting to do projects with you?

CM: There's a lot of reality TV people calling us up. [Laughs]

MA: Yeah, we've been approached by numerous people but we don't say yes to anything we're uncomfortable with. We're looking and deciding and making sure what works for us and our future.

What has been your parents' reaction to the documentary?

MA: Our mom loves the film. She had no idea it would get this kind of attention. She's happy for us, mostly. She goes to a couple of screenings, does some Q&A, too. Our dad saw the movie. He loves it and says it's honest and truthful, and he's like, "Good luck." He knows we'll make it.

One of the most powerful scenes in the film is when your mother calls your grandmother. Have you met any of those long-lost family members now?

MA: That scene was the first time our mom had spoken to our grandma in, like, 25 years. I shot that scene actually and it was shot purely in the moment. It wasn't planned...Recently all of us met our entire [maternal] family. It was a very emotional, overwhelming experience and it felt like we were part of a bigger world.

Where did you meet them?

MA: We went to Michigan where a lot of them live.

(L-R) Bhagavan Angulo, Govinda Angulo, Crystal Moselle, Susanne Angulo, Mukunda Angulo, Jagadisa Angulo and Narayana Angulo
What did you know about your family before you met them?

BA: The only connection I had with some of my family was through social media so I had some connection with a few of my aunts and cousins but that was basically it.

Growing up, would your mom share stories about them?

BA: All the time. We'd ask a lot about how she grew up and where she's from and she'd share stories of her father and mother, her brothers and sisters. She told us about her childhood.

Has your family seen the film yet?

MA: They haven't seen it yet but will see it when it premieres on Friday in Chicago at the Music Box Theatre, which is close to where they live.

What did your family know about you guys?

CM: They didn't know there were that many kids!

Now that new doors have opened for all of you, what are some of the things you're most hoping to do in life?

MA: Right now I'm an aspiring director and my biggest goal is to make feature films.

BA: I'm pretty much already doing a lot of what I've always wanted to do because I'm a performer. I'd also like to continue working behind-the-scenes so if that means working with Mukunda as the director and me as the assistant director or assisting Govinda on camera...I'm also working towards becoming a theater rehearsal director.