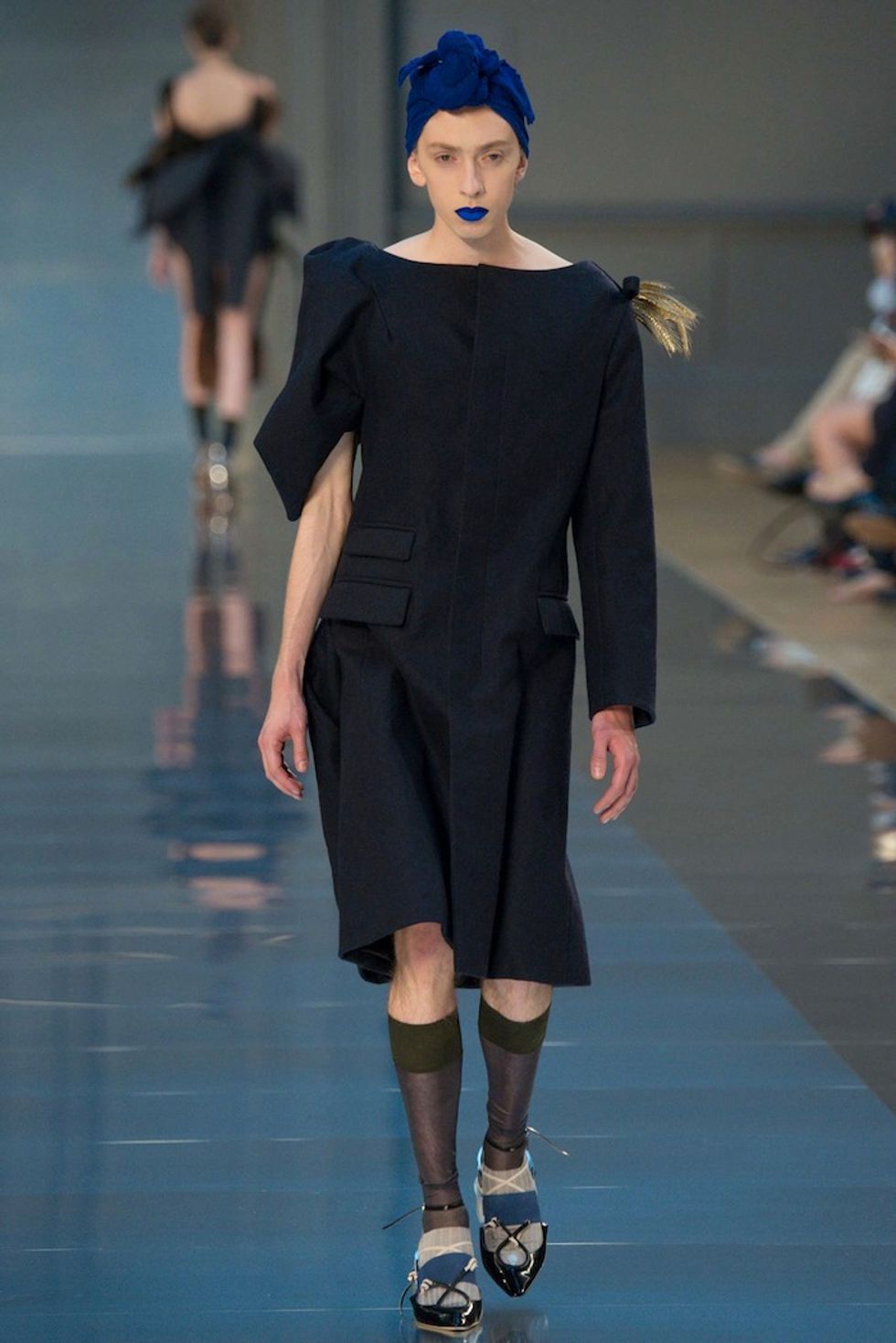 by Sandra Song
PAPERMAG
photo by Yannis Vlamos
"Everyone seems really positive," model John Whiles said. "My dad sent me a text telling me that I'm 'at the cutting edge of fashion'."
And he's right of course, seeing as how the 23-year-old British model, who's worked for the likes of Yves Saint Laurent and Paul Smith, walked in a headline-making show: Maison Margiela's gender-bending couture collection designed by John Galliano in which the designer cast three male models (including a blue-lipped Whiles) to walk the catwalk in women's garments.
Whiles said the fall 2015 couture casting was somewhat of a surprise.
"I believe that the boys in the show were specifically requested, but I have no idea why I was chosen," he said, adding later that it was all extra exciting as, "there was no attempt to make the [male] models appear feminine other than putting us in dresses" -- a point also made by observers who noted that visible leg hair was probably one of the few blatant indicators of the show's male casting.
Sporting a bold Yves Klein blue turban and matching lip, Whiles walked the show along with fellow models Roan Louch and Carl Hejm Sandqvist, tearing up the runway in heels that he said were admittedly difficult, despite not being the stilettos his female counterparts donned.

"I've never worn heels before," Whiles said. "I'm not looking forward to the video of the show being released and revealing my total lack of grace."

photo by Rex Shutterstock
Gender-fluid fashion shows have been more prominent in recent seasons, and though Jean Paul Gaultier led the charge with his casting of drag queen/Eurovision darling Conchita Wurst and transgender model Andreja PejiÃ§ a few years ago, this renewed emphasis and interest in androgyny seems to be less about shock tactics and more about reflecting actual societal change.
Cast by Shaun Beyen, this season's show also kept in line with Margiela's bent toward challenging societal conventions -- and while Galliano's take may not address commodification and capitalism in the same way as Martin Margiela's original designs, there may be something brewing beneath the surface in regards to gender-fluid casting and the cost differential between women and men's clothing. After all, it's well established that women are consistently charged and taxed more for bags and clothes.
As a veteran of several campaigns, Whiles says it's a change he'd love to see fully embraced by the fashion world (and society for that matter) -- and hopes it will lead to him being cast in a wider range of womenswear shows -- even if actually wearing the make-up wasn't particularly enjoyable.
"As far as I could find out, the blue on my lips was actually poster paint," he said. "And I had it on for about 5 hours before the show. It was quite unpleasant."