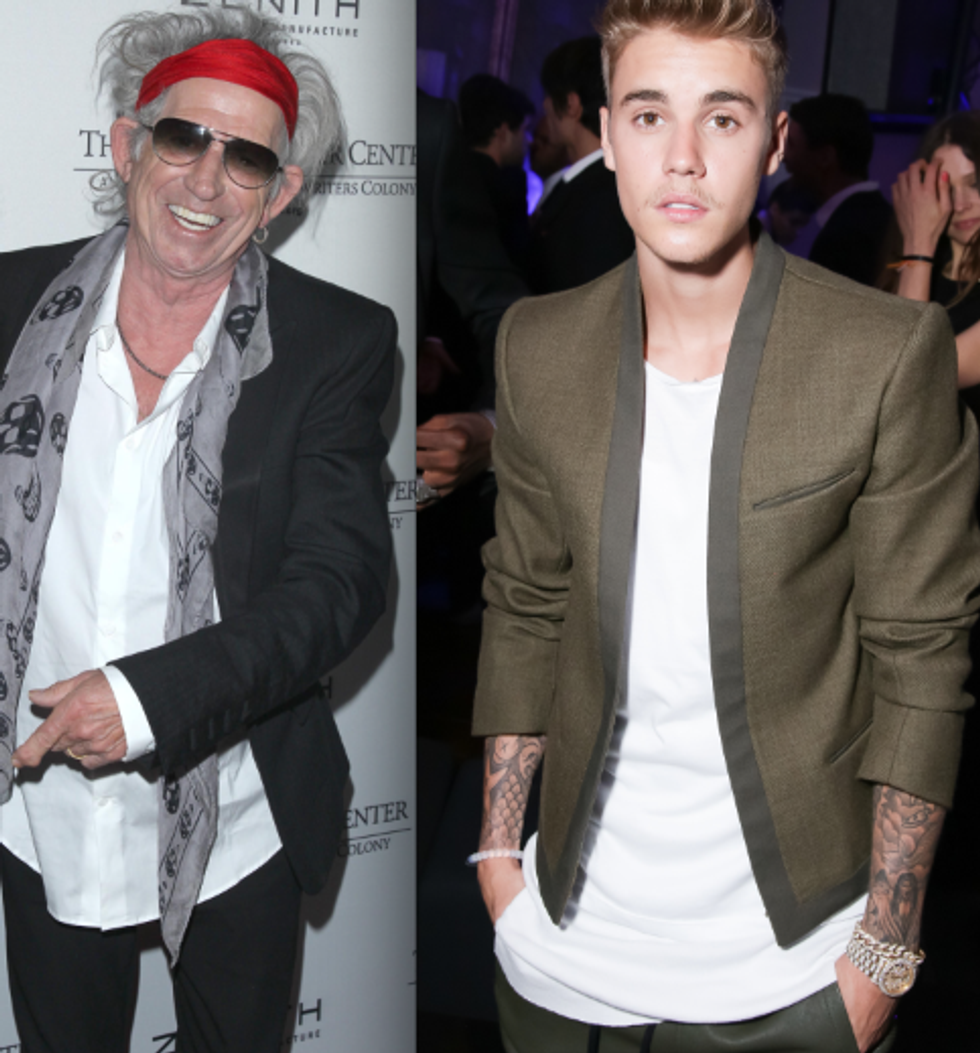 by Abby Schreiber
PAPERMAG
It doesn't take a psychologist to figure out that Justin Bieber has spent his life searching for the right mentor. He's a kid whose dad was mostly out of the picture until his son started making millions of dollars at which point in time Bieber Sr. decided to show up and exhibit some very no bueno parenting techniques like getting high with his son, helping him drag race, and throwing the family dog off a balcony. Sure, Biebs has had career guidance from Scooter Braun and Usher but what he really needs in a mentor is not just a business coach but a life coach. Someone who's lived and lived large. It turns out, there's five very qualified candidates for the job. Take a look at a history of Justin's would-be mentors, below.

The Rock God: Keith Richards
[Photo of Justin by Matteo Prandoni/BFAnyc.com / Photo of Keith by Jimi Celeste/PatrickMcMullan.com]
Relationship History: As the story goes, the two ran into one another at a bar in Parrot Cay, Turks and Caicos, earlier this month, at which point Richards supposedly asked Justin, "Who the fuck are you?" Like any self-respecting, swaggy 20-year-old, Bieber replied, "I don't know, who the fuck are you?" And that, ladies and gentlemen, is how a beautiful friendship was born. (Or at least, it's what led to a few drinks being consumed and a few phone numbers exchanged.)

What Keith Thinks of Justin: Not much. Despite getting chummy over a few rum swizzles or whatever it is you drink in Parrot Cay, the human jack-o-lantern is alleged to have said to Biebs, "Let's get one thing straight. You're a wannabe."

How Keith Might Mentor Justin: If Keef took Justin under his wing, there's a 100% chance that he'd call the pop star out on his shit (good) but there's also an equally likely chance he'd inadvertently get the kid hooked on harder drugs when Justin inevitably realizes he can't keep up with the 71 year-old all-star (bad).


Relationship History: The two first met on Britain's The Graham Norton Show back in 2010 and Justin remarked to John, "your 'stache is the jam." John gave Justin an eyebrow pencil and the pop star was later seen wearing his own upper-lip caterpillar out and about in London. Oh, and Justin also gave John an autographed bottle of Proactiv acne medicine (seen above).

What John Thinks of Justin: He's an honest-to-god Belieber, having gone on the record many, many times to tell people that he listens to Justin's Christmas album during the holidays and is such a devoted fan that he'd even support Justin if he were to start going by the rap name 'Bizzle.'

How John Might Mentor Justin: You KNOW Justin has a secret freaky side that's just waiting to get coaxed out -- Waters can help. We'd like to imagine Justin's transformation into 'Bizzle,' a former child star-turned-film actor mostly known for his roles as a lesbian drug dealer in Baltimore and a two-bit Kansas City bookie who gets framed for a murder by a bunch of violent drag queens in two Waters films.

Relationship History: The two met and shared a tÃªte-Ã -tÃªte at a Knicks game back in October.

What Jesse Thinks of Justin: Lord only knows.

How Jesse Might Mentor Justin: He'd show Justin how to be humble, faithful to your romantic partner, tolerant of others and respectful to authority figures. Oh wait...