Today, long after its evolution from subway vandalism to a beloved global art form, graffiti is a constant fixture of daily urban life, most of it as unremarkable as pigeons and dog shit. But there are exceptions to that rule: a handful of artists are currently painting our city Technicolor and proving that sometimes the message really is more than the medium. Here are nine of them. 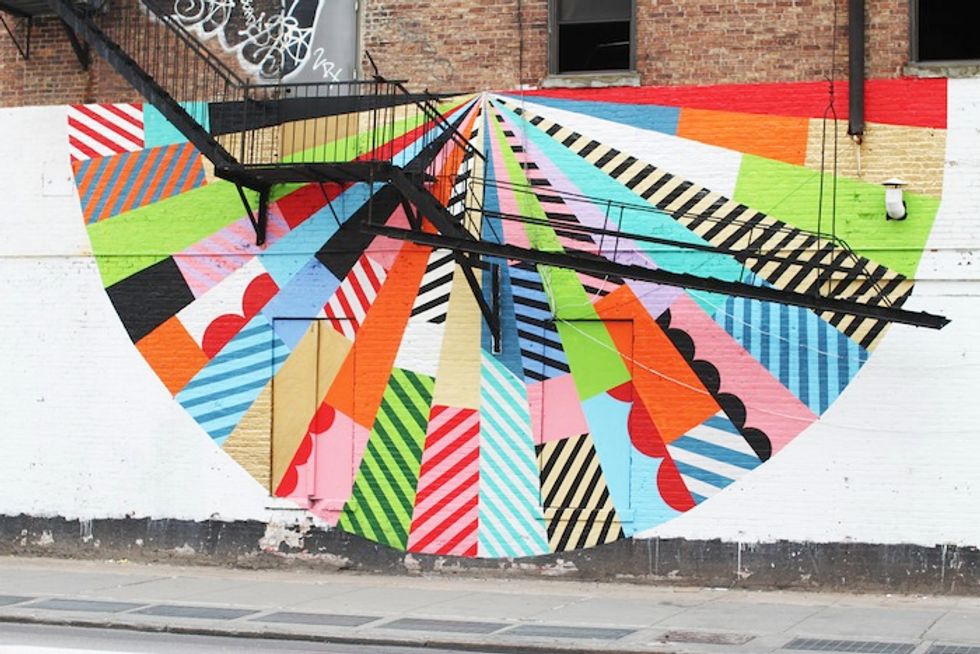 At 32 years old, Jason Woodside is still quite young considering the amount of recognition his work has garnered. He's already collaborated with Obey, been commissioned by restaurants and hotels across all five boroughs and taken over the New Museum with his signature clash of rainbow-bright prints. His tangram-esque mishmash of patterns puts his pieces in visual conflict with their often drab, concrete environs, and makes them instantly recognizable as part of his oeuvre. Though found throughout the streets of New York, his work tends more towards fine modern art than your run-of-the-mill street tag, making him a leader of what some have termed the post-graffiti movement. 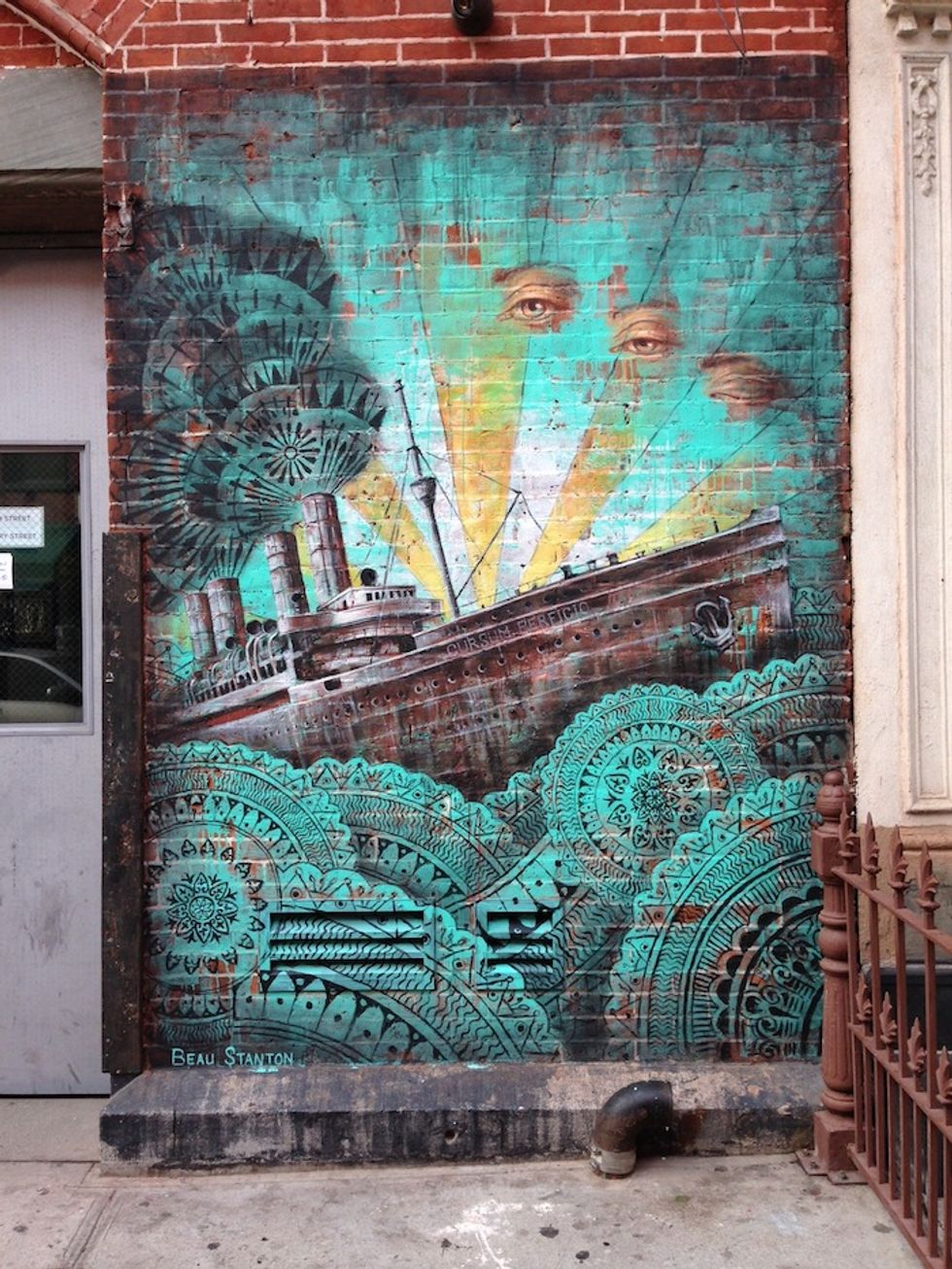 Beau Stanton is technically more muralist and painter than professional street artist, with impressively detailed work that ranges from miniatures to paintings that cover entire facades. Stanton mixes historical, nautical and architectural references to create murals that seem perfectly suited to the Industrial Era -- that, or something out of a steampunk's wet dream. His paintings fuse the present and past into single images -- or, as he puts it, "enigmatic illuminations."

Maya Hayuk's murals lean more toward geometric, neon-colored acid trips than the indecipherable bubble letters or childlike scribbles you're used to seeing sprayed across every street corner. She takes over huge walls, transforming them into kaleidoscopic imagery that pulls the viewer in like a modern-day mandala. With solo exhibitions held the world over and her own book, Round the Way, Hayuk creates a synesthesia-like experience that always leaves you wanting more. 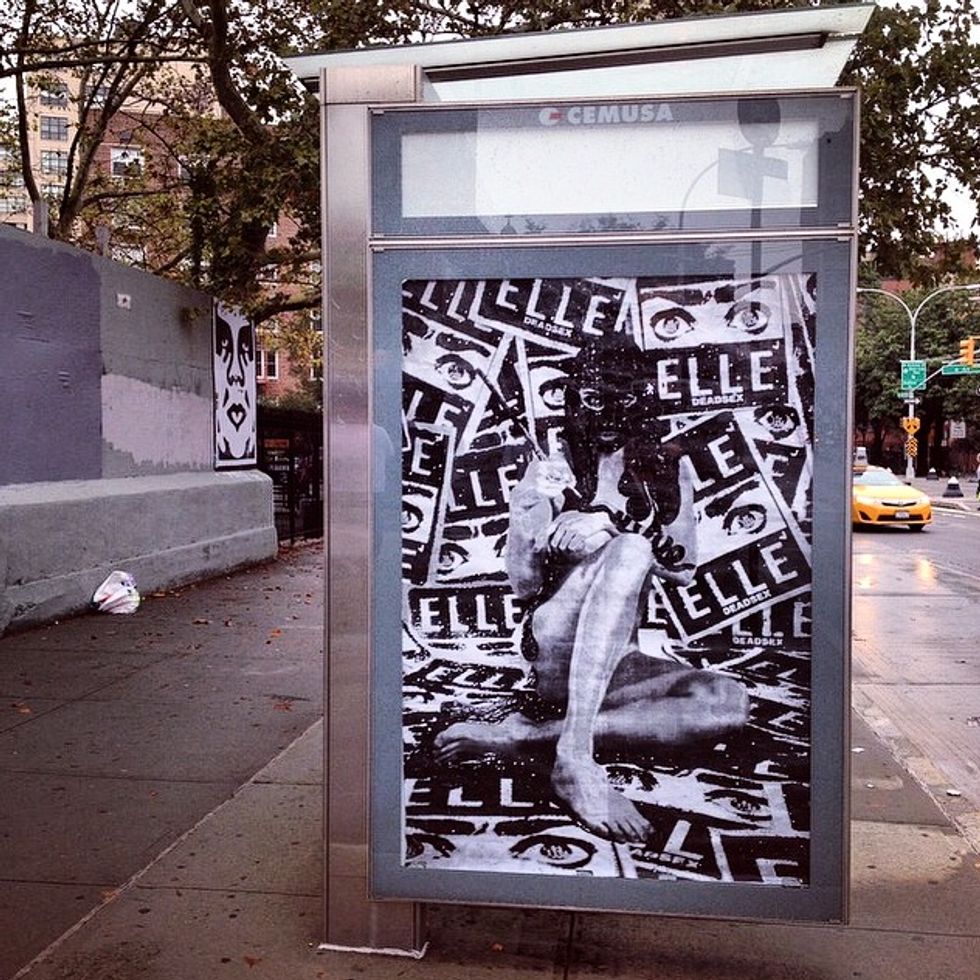 ELLE's street art ranges from tags and wheatpaste to murals, sculptures and, most recently, advertisements replaced with her own collages. Though she frequently takes over billboards along the BQE without permission, she's also been commissioned by IKEA to make posters and had her work legally projected across the facade of the New Museum. ELLE's work blurs the line between fine, street and commercial art, proving that the boundaries between each really only exist in the eye of the beholder. 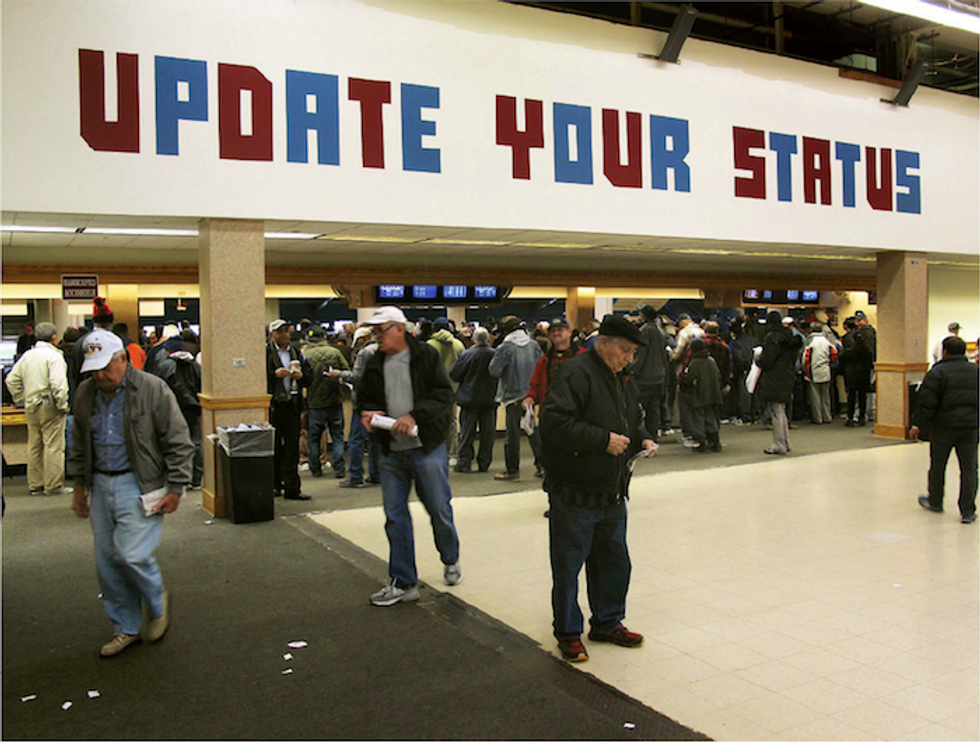 The twin brothers behind Skewville first came to fame thanks to the wooden sneakers they left dangling over power lines, echoing the real ones they'd seen growing up in New York. They still remain loyal to their original footwear, but the twins' most recent work focuses more on ironic slogans, like a double-ended arrow reading, "SUCKS EITHER WAY," and a mural at the Aqueduct Racetrack in Queens that encourages you to "UPDATE YOUR STATUS." 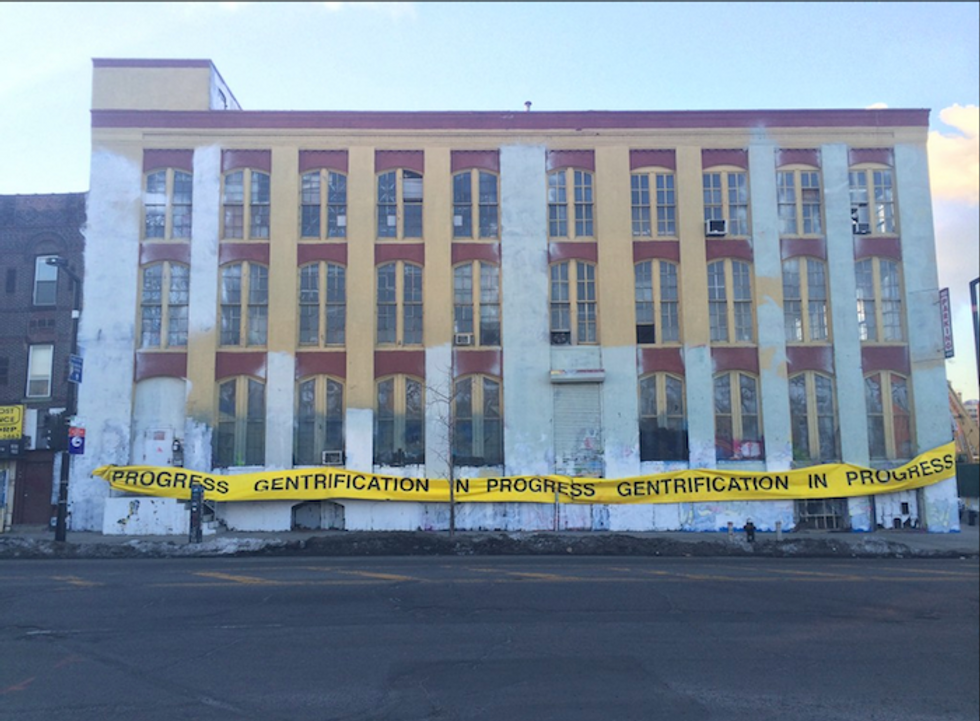 GILF is surely one of New York's most outspoken, forward-thinking street artists and social activists. Probably best known for her banner strung across the recently demolished 5 Pointz building that read, "GENTRIFICATION IN PROCESS," GILF's work has been written about in New York magazine and the Daily News and shown in galleries across the US and abroad. 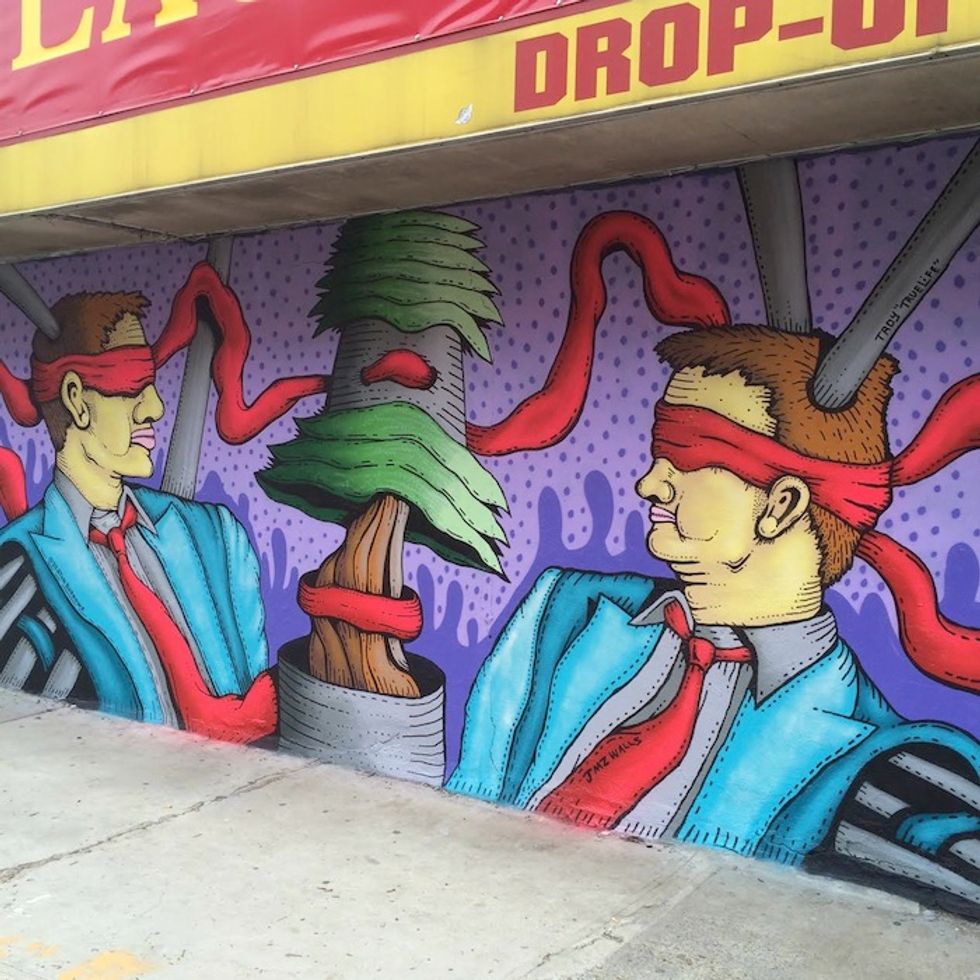 Matthew Denton Burrows' mural work looks like what Tim Burton might create if he decided to dabble in folk art. His blocky, primary-colored portraits blend together the macabre and bizarre, but with an innocence and simplicity that make the final product more charming than alarming. Though a trained illustrator and fine artist, Burrows' began doing large-scale work in public spaces in 2013. He may still be a street-art novice, but the darkness, intensity and introspection in his pieces promise big things to come. 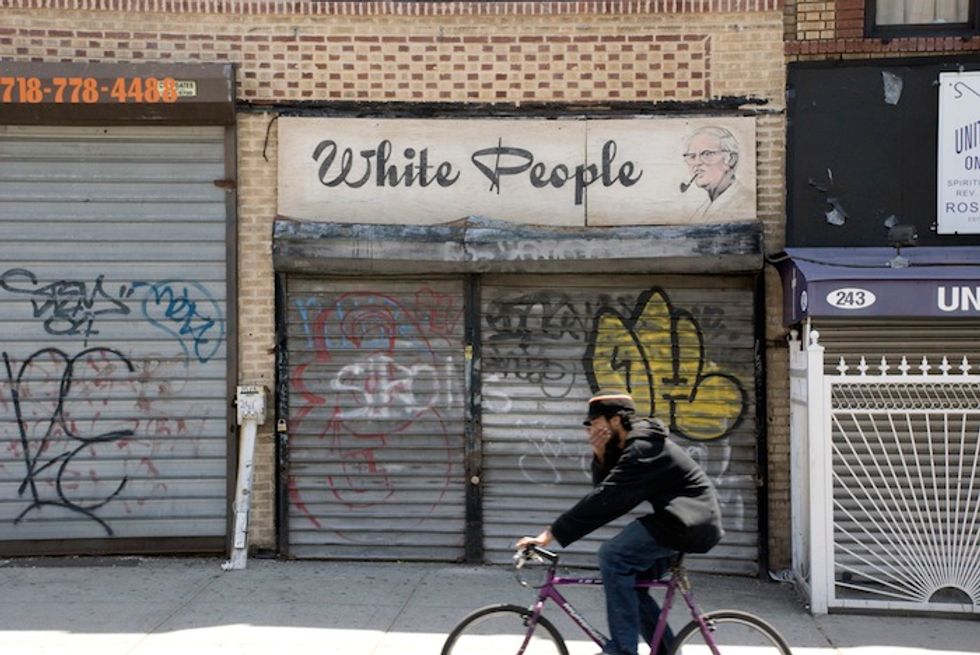 Specter's street art is trompe l'oeil at its finest. He paints a wall of broken windows in the heart of gentrified Williamsburg, creates elaborate wrought-iron gates out of cardboard and installs hyper-realistic bodegas on concrete walls. Though he earned his credentials on the streets of Montreal as part of the Kops crew, five years in New York have helped hone this artist's phantasmagorical aesthetic to perfection. 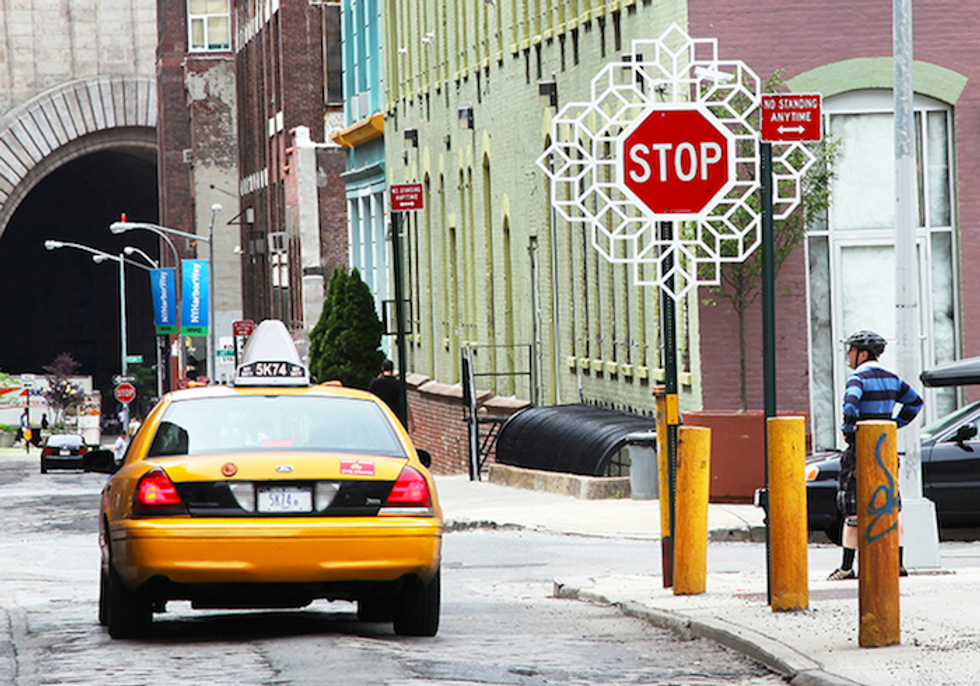 Graffiti artist isn't quite the right term for Aakash Nihalani. Though the spirit of his installations is very much in tune with that of his fellow street artists, Nihalani's tools of choice are cardboard and fluorescent-colored tape. Creating geometric optical illusions in urban settings, his work causes viewers to question what's real and what isn't, producing a sense of the uncanny in the midst of the everyday.

A special thanks to DB Burkeman.