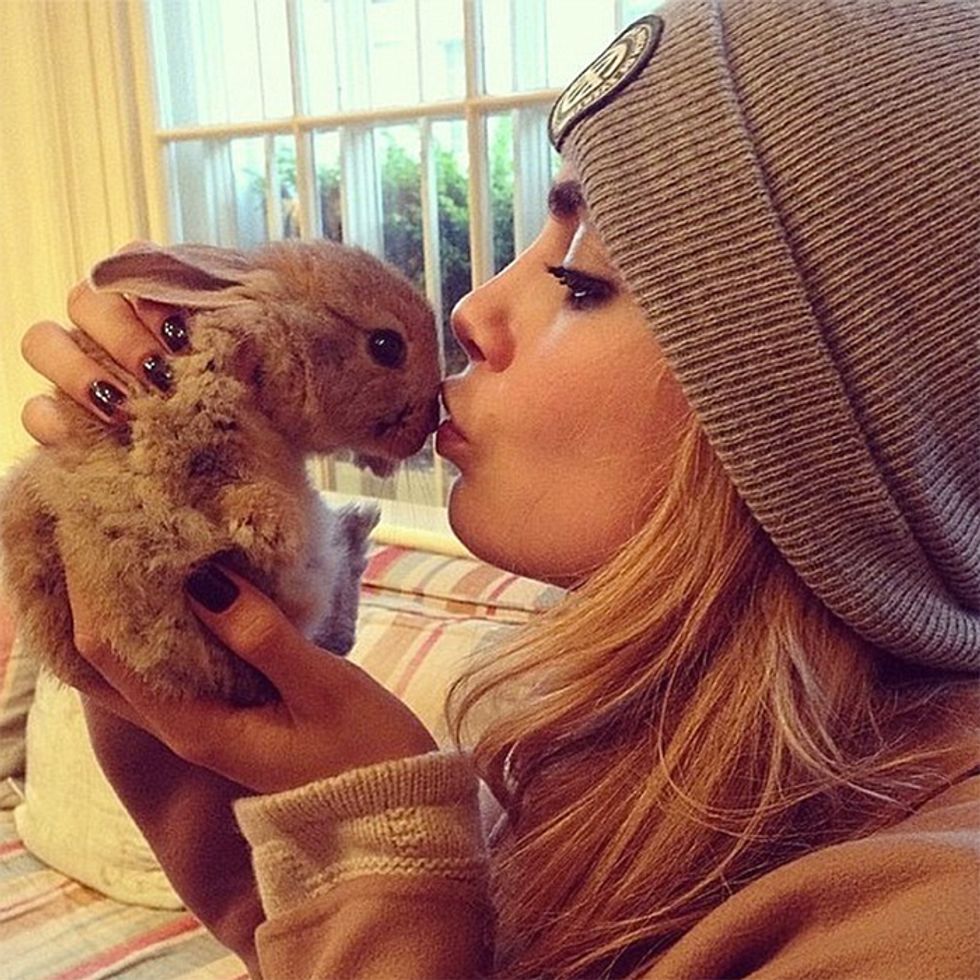 With such a wide world of social media available to us, one of the joys of Twitter or Instagram is finding new ways to express yourself -- particularly if you're a famous person tied to an official outlet, who also happens to have a really adorable pet. We rounded up a handful of celebrities who have created robust online accounts for their fuzzy friends, whether they're just posting adorable pics or creating a whole animal alter-ego. While we weren't able to completely confirm that their celeb owners are ghost-writing their pets' tweets, these accounts seem legit.

What's Cara Delevingne's best asset? You're probably thinking "eyebrows" but you're wrong -- it's her adorable bunny rabbit, Cecil, who she discovered on a shoot for Topshop. Cara fell for the furball, elevating him from photoshoot prop to supermodel sidekick. The model-turned-actress star appears frequently with her favorite bun on his personal account, hanging out together at fashion shoots, getting make-up done, or chilling in wildly expensive purses.

Lady Gaga's adorable black French bulldog has popped up in her social media since she got her last year, but this spring, Asia (alias: Batpig) got her own Instagram account. Now Miss Asia Kinney has her own career to tend to, rocking pearls and fine leather goods in Coach's latest campaign, alongside the pups of Miranda Kerr and Ariana Grande.

Choupette Lagerfeld is the OG of celebrity pets on social media. Since the adorable Birman was adopted/"stolen" by Karl Lagerfeld in 2012, she has risen to worldwide fame, reportedly raking in over $4 million in 2014 for her gigs shilling German cars and her own Shu Uemura line of makeup. That's more than enough scratch to maintain the staff that keeps her snow-white fur pristine, not to mention manage her Twitter and Instagram feeds, with some left-over for designer catnip.

Miley Cyrus keeps a full-on menagerie of pets -- including one adorable pig, Bubba Sue, who shared our cover with her -- but her latest addition is the first with her own Instagram account (which Cyrus herself maintains). Tiny fluffball Shanti Om joined the social media universe back in May, and has since garnered 139k followers, many of whom create fanciful photoshops of her in the hopes of getting regrammed.

It's well known that Mean Girls star Amanda Seyfried is obsessed with her dog, an adorable Australian shepherd named Finn. As she told Vogue this spring, "I just don't want to leave him anymore. Maybe it's because I'm subconsciously aware of his mortality. I try not to think about it, but somewhere inside of me, I'm like, He's going to die way sooner than all the rest of the people I know!" She's making good use of the time they do have together, giving Finn his own Twitter account to share his doggy-thoughts with the world.

Photo via @grahamshizza
Graham the Kitten

Anyone who's listened to Ed Sheeran's music knows he's a sensitive soul, so it's no surprise that he was moved to adopt a kitten that was in danger of being put down. Sheeran saved the adorable Graham from the shelter, and promptly got him online, tweeting to fans and taking selfies with his red-headed owner. He even had a short-lived stint as an advice columnist on sugarscape.com.

It should come as no surprise that Paris Hilton's got a passel of pups with their own social media accounts. After all, with her chihuahua Tinkerbell, Hilton pioneered the celebrity-pets-as-accessories trend back in the dark, pre-Insta days of the early aughts. Though Tinkerbell went to the great oversized-Vuitton bag in the sky this spring, Hilton's other dogs are still going strong. Her two pomeranians, Prince Hilton and Princess Paris Jr., are joined by another chihuahua, Peter Pan.
You May Also Like
Music