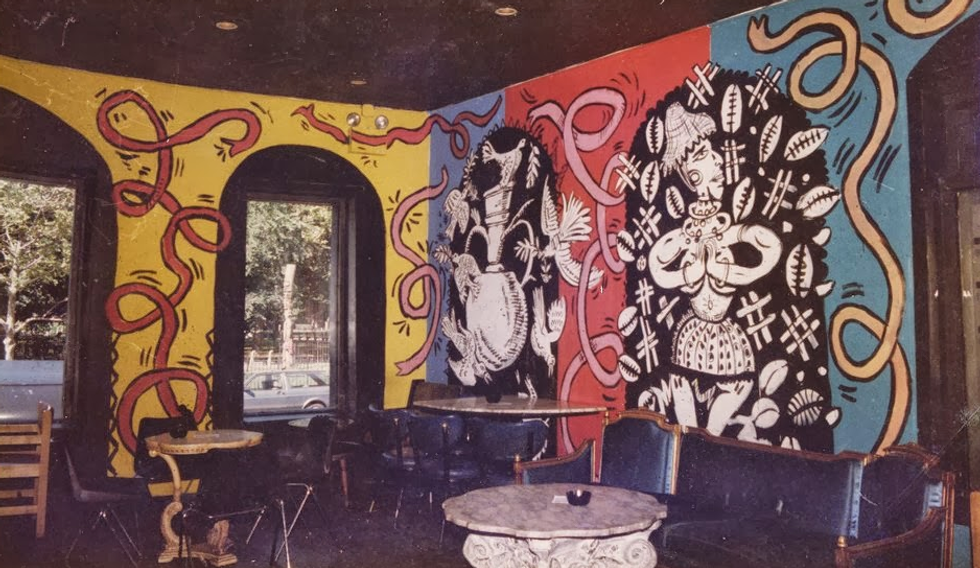 by Michael Musto
PAPERMAG
"Everything used to be better, blah blah blah," say windup old fogeys like myself. The reality is that they weren't necessarily better, but they were definitely different, back before tighter restrictions and the web made cutting loose a little less loose. Here are some of the haunts that made New York a real (not virtual) wonderland:
(photo by Bill Bernstein)
HURRAH (36 W. 62nd Street)
Downtown went uptown for this super trendy dance club, which was also a venue for performances, fashion shows, and schmoozing in buzz cuts. The crowd was chi-chi and attitude-y, and the music they danced to wasn't the usual disco -- more often it was emerging punk and new wave, a fresh sound in dance clubs at that time. And there was something wrong and kind of exciting about going so far up north.

PIZZA A-GO-GO (121 W. 31st Street)
In the '80s, promoter Vito Bruno took over an old pizza restaurant and made it into a blithely enjoyable club for downtown habituÃ©s. With few frills and a no-pressure, friendly feeling, the place provided a healthy slice of nightlife, no cheese.

ICE PALACE (57 W. 57th Street)
From 1977-'85, this was a glitzy disco -- filled with neon and mirrors -- where gays, including many black and Hispanic ones, came to escape and celebrate. For a mirror-ball palace, it had a touching sincerity, and the Sunday tea dance was kind of legendary. In fact, the Ice Palace had a real cuteness to it just by being effortlessly queer-festive and never pushing too hard for fabulousness.

INFINITY (633-653 Broadway)
In the late '70s till the early '80s, this warehousey space was dotted with neon lights, bowls of fruit, and true blue partiers. The invite for the club's weekly gay party genteelly encased the "Infinity" logo inside the image of a phallus. But it wasn't always so festive. One night, a blaze sadly put an end to Infinity.


KING TUT'S WAH WAH HUT (112 Avenue A)
The '80s were a boom time, not only for large dance clubs, but for atmospheric East Village hangouts with a cultural bent. This place, which ran till the early '90s, provided the perfect setting for reading series, drag performer Ethyl Eichelberger going to dark places, and the nouveau punk band Das Furlines. The owner also ran another East Village playpen, Aztec Lounge. The lore of South American Indians and Egyptian kings were definitely worshiped, especially as mixed with contempo performance weirdness (a good thing).

SAVE THE ROBOTS (25 Avenue B)
I wasn't a regular at this after hours haunt, since it never felt like a natural setting for me. But for anyone who wanted to start their evening at 4am, this storefront/basement was the place to go. (It ran from 1983 to '84, and then reopened in 1986 after renovations and improvements). Reportedly, only vodka, soda, and juice were served, so a lot of the clientele came tanked up on other things. Future talk show host Craig Ferguson was a bouncer there and probably got great experience as to how to handle an unruly guest or two.

1018 (515 W. 18th Street)
In the late '80s, the old skating club the Roxy became 1018, an R&B flavored concert venue/dance club, though I also managed to catch pasty white singer Rick Astley in a promotional appearance there. They had name brand DJs and featured shows by freestyle performers and LaToya Jackson. Eventually, it became the Roxy again, where big-chested gays and drag queens made a weekly thump-thump shrine to themselves on Saturday nights. And I must say that was my favorite incarnation of the place.

MARS (13th Street and 10th Avenue)
Inspired by Blade Runner, but with distinct echoes of H.R. Pufnstuf, this multi-level dance club -- not to be confused with Mars Bar -- had walls of lava lamps and surreal statues to add to the all-around trippy experience. Shortly after its 1989 opening, the club kids that were going to make it their home base were shooed away, but there were plenty of other mixed nuts willing to fill its spaces. The gay Sundays were particularly memorable.
You May Also Like
Music