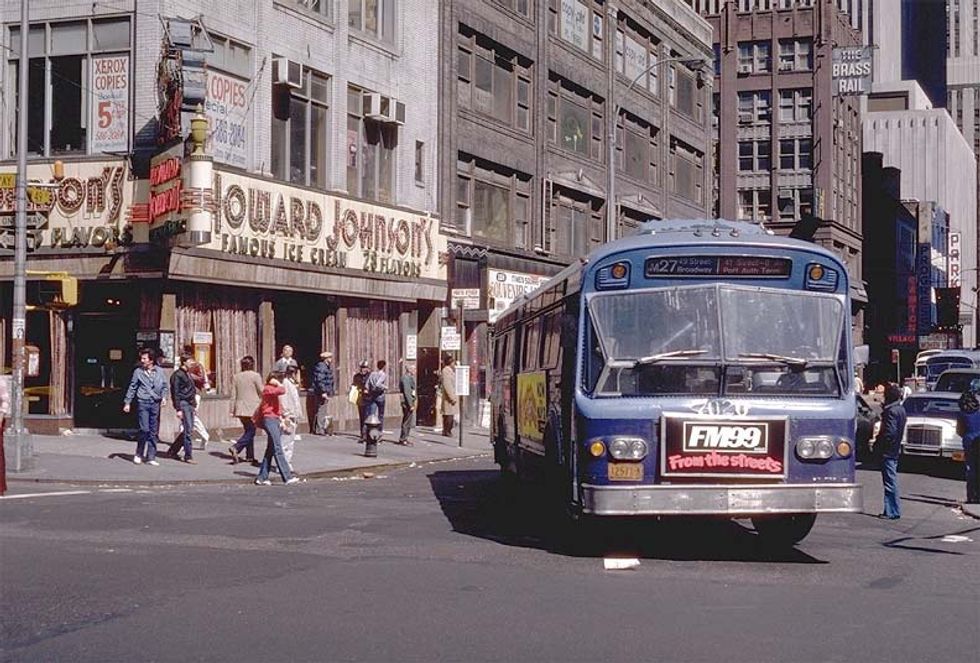 8 Forgotten Hangouts That Made NYC Special

Before Duane Reade, Chipotle, and TD banks took over this town like an alien armada, there was way more room for mom and pop stores, divey restaurants, and delectable sleaze dives. Well, I not only went to all those joints, but I happen to remember every squalid second, even as I dodged the wrecking balls. Here are the 8 edgiest that shall never be recaptured.

The Gaiety Theatre (201 W. 46)
This was a glorious smarm palace in the heart of Times Square that survived for decades, even after Madonna  immortalized it in her saucy Sex book. (It finally shut down in 2005, the year the gaiety died.) The first time I went, I sat witness to the grinding of various "male dancers" on a rinky dink stage, only to find that the audience weirdly cleared out the second the show was over as if a bomb had dropped. I later found out that all the old men had run backstage to negotiate "dates" with the "stars" right there on the spot! Ah, the old Times Square -- how magical it was.

Photo via Forgotten NY
Howard Johnson's (46th and Broadway)
Bottoming right under the Gaiety was this glitzy glorified chain-diner, where the food wasn't very good -- even their famous fried clams tasted like burnt rubber -- but the Damon Runyonesque ambience was exquisite, full of pimps, tourists, and old ladies with way too much makeup. Built in 1955, it was steamrolled in 2005, basically becoming a giant fried clam.

Woolworth's
Before Rite Aides and Duane Reades popped up three to a block, these were the prevailing household item/novelty shops around town -- aka Five and Dime stores -- where I'd regularly go to pick up kitschy art works and/or suppositories. My entire apartment was decorated with an array of shlockily splashy works d'art courtesy of this fine emporium. Alas, hurt by competition and expansion, Woolworth's was basically nickel and dimed to death.

photo via Jeremiah's Vanishing New York.
Crisco Disco (15th Street and 10th Avenue)
At a blurry time in the '1970s, leading headlong into the weighty '80s, this was a de rigueur gay thumping palace, along with keeping-it-real boites like the Anvil, Flamingo, Paradise Garage, 12 West, and Cock Ring. The DJ was perched atop a gigantic Crisco can -- you heard me -- and everyone else was too lubed up or drugged up to even notice, as they partied into the wee, wee (or maybe the wee-wee) hours. The spot eventually became an upscale restaurant named Monarch (with the Gilded Lily in the basement), but beware of the cream sauce.

photo via Flickr.
Hawaii Kai  (1638 Broadway)
A wildly kitschy tourist attraction, this Polynesian restaurant right out of an Elvis movie had sarong-wearing wait-ladies serving you suckling pig and poi, not to mention fruity cocktails that inevitably were accessorized by multi-colored parasols. The place closed in 1988 and today it's a theater gift shop, but nothing could be more theatrical than the twisted grandeur that was Hawaii Kai.

Brothers and Sisters (46th between 8th and 9th)
I love a good piano bar, and this one had real Broadway ambience because chorus people would regularly drop by, along with the occasional star, and the whole place felt like a really friendly house party full of wonderful drunks. A flaming singing waiter named Stanley was a special treat when he took the stage to do Kander and Ebb songs and such.

G.G.'s Barnum Room  (128 W. 45th Street)
Old-school Times Square transsexuals--the type whose lips entered the room before they did--filled this extraordinarily ambient circus of a 1970s disco, complete with a gigantic cobweb on the ceiling, from which acrobats dangled and taunted as you tried to reach up and grab. In a time when the underground was truly subversive, the unselfconscious celebration of society's "freaks" touched me in a very profound way.