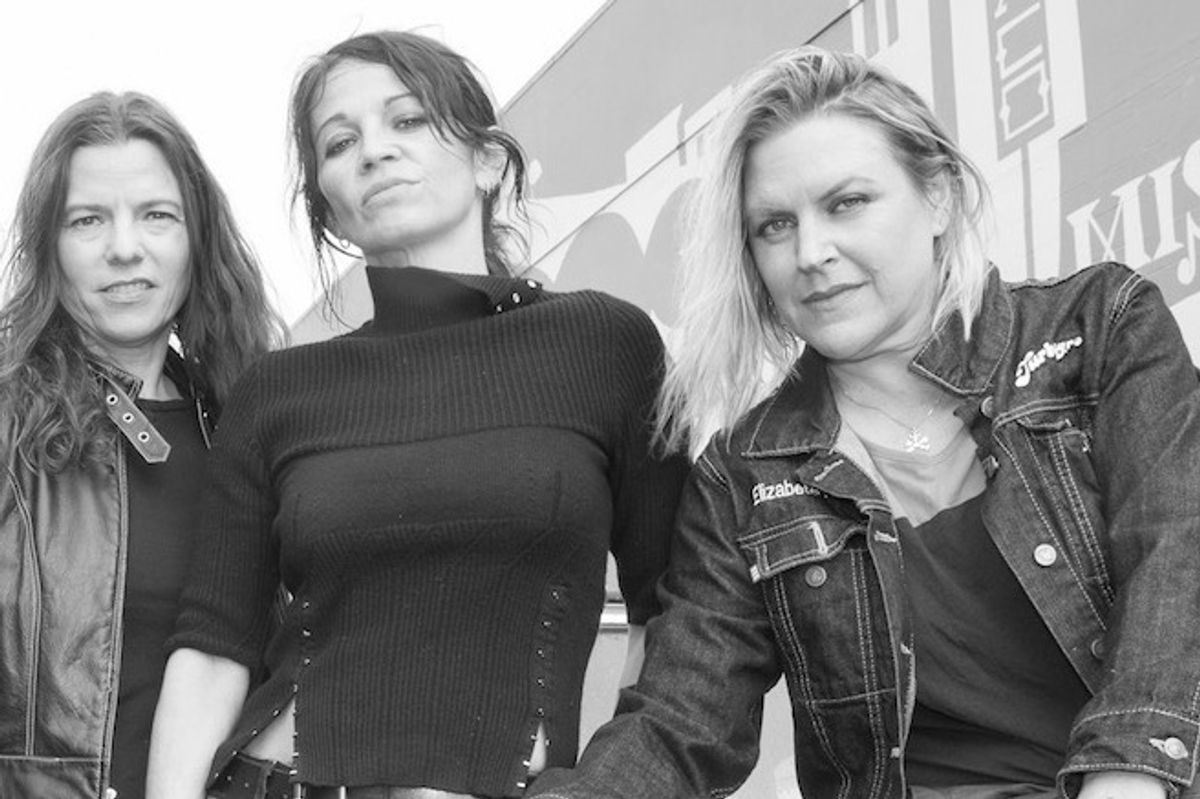 7 Year Bitch managed to exist concurrent to a few of the '90s biggest musical movements without ever quite being part of them. They started in Seattle in 1990, but didn't quite fit into the boy-heavy grunge scene, nor would it be accurate to lump them in with the riot grrrl scene that was happening in nearby Olympia. Instead, as demonstrated on their new album Live At Moe, which was recorded in 1996 at Seattle's Club MOE and which PAPER has the exclusive premiere of below, 7 Year Bitch were a hedonistic, classic rawk-infused punk animal unto themselves, famous for raw live shows and resilience in the face of tragedy.

The band was formed by vocalist Selene Vigil, guitarist Stefanie Sargent, bassist Elizabeth Davis and drummer Valerie Agnew and released three albums, two (1992's Sick 'Em and 1994's ¡Viva Zapata!) for the small label C/Z and their 1996 swansong Gato Negro for Atlantic Records. The band pressed on after the death of Sargent and the shocking murder of their close friend, Gits frontwoman Mia Zapata. 7 Year Bitch broke up in 1997; Live At Moe's is the first sign of life from the group in more than two decades. PAPER talked to Davis via e-mail about the band's legacy and future plans.

Tell me about this album. It's been sitting in the vaults for a while; what did you think when you heard the recording again, and what made you decide you needed to release it?

I think I was the last person in the band to take the plunge and listen to it. I was nervous to hear it. It wasn't until Valerie sent me a very enthusiastic e-mail saying how awesome it was that I set the time aside and gave it my attention. My reaction was so emotional. I still don't think I've heard it without crying like a baby in parts, or at least getting teared up. I'm just so blown away by Selene's rawness and honesty and willingness to display such intense emotions onstage. And the power of the music, how tight Valerie and I played together, the energy from our hometown crowd – all of that really overwhelmed me profoundly. I've since listened to it in its entirety with my three surviving band mates, and it's just… intense- very moving and bonding. The front of house sound engineer was Lisa Faye, our longtime soundwoman and briefly, our last guitar player. She passed a few years ago. We really hear her mark on our sound and this record feels, in part, like a tribute to her. What made us decided we needed to release it was the strength of the performance and the support of Scott Blum who recorded, archived, and produced it. We are so grateful to have this opportunity.

Are you just putting this album out, or is there any chance of a new album or tour?

When you look back on the band's legacy, what do you think? Are you glad you stopped when you did, or do you wish you had kept going? What was it, in your opinion, that made the band special?

I would've preferred a few more years of touring and writing more songs in 7 Year Bitch. When we broke up, I was a bit lost and in a daze because the band was my entire world. That sounds unhealthy, but rock and roll and health don't really go together, do they? The word "legacy" is a bit out there, for me personally. It's hard for me to really see my band from an outside perspective. In terms of personal legacy, I think of what the experience has given me in the form of lifetime bonds with my incredible, talented, interesting bandmates. What made 7 Year Bitch special, which I can only see now with years of perspective, is that we just fucking did it. We didn't wait. We got out there, forged our way, learned to play our instruments and figured out how to write songs and deal with record labels and press and touring and drugs and death and sex and life. We went for it all the fucking way. I'm proud of that.

Do you feel any kinship with the younger female-driven punk bands working today, such as White Lung or Perfect Pussy?

I am always interested to hear what women are doing in non-mainstream music and definitely like the energy and songwriting and aesthetics of both bands you mention, but the idea of "kinship" doesn't really occur to me. It just makes me happy when women get off the sidelines and follow their dreams of being in bands because that has brought so much fulfillment and meaning to my life. I can relate to them on that level. I suppose that is kinship. So now the answer is yes.