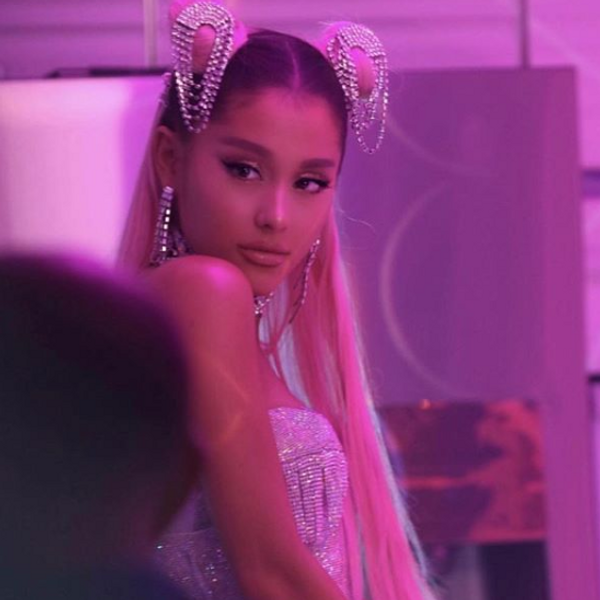 The most talked-about song today is most likely Ariana Grande's diamond-encrusted new single, "7 rings," from her forthcoming album, rumored to be titled thank u, next. We have our own thoughts about the video (and its striking similarities to career moves of Gwen Stefani) but isolating the song on its own, it's still a bop, which also feels very Gwen. I mean, Gwen sort of did forever immortalize The Sound of Music for a new generation with her wildly fun 2006 song "Wind It Up." Ari takes a page from that book, repurposing the melody of "My Favorite Things" and adding bubbly trap overtones for 2019. Much will be made about Ari's hip-hop flexing (and maybe stealing — oof?), singing about how rich she is and all, but whatever you have to say about the song's context, just for posterity, something about it still rings true to her hit-making prowess.

James Blake's new album Assume Form hits today and, as a whole, it's like an sonic orgasm had while in the throes of depression mixed with hip-hop, so obviously we love that. His collaboration with Moses Sumney, the moody-catchy-sexy "Tell Them," is one of many standouts, not least because two of our favorite modern vocalists join forces to show the magic that can happen when male divas share center stage. But in all seriousness, from the beat to the abundant melodies on down, tell all your friends about this A-game banger.

The Lordt hath blessed us with a great day for new releases, we see! Here is "PLAY," a team-up between J-E-T-S and rap's queer superhero goddess Mykki Blanco, and it's every bit as fun as its title promises. Mykki teases out the differences between hustling and love on top of a buzzy, industrial beat with speaker-rattling hip-hop kickdrums. It snaps and fizzles the way that Mykki at his best often does. "PLAY" is also, such a nice tease of what's to come. Our bodies are so ready for Stay Close to Music, Stay Close to God we can hardly stand it.

Sultry-voiced siren Maggie Rogers releases her long-awaited debut today, Heard It In a Past Life, and while we take some time let the power of her voice and impressive songwriting wash over us, "Burning" is a delicious palate-cleanser should you need one in this sick, sad world. It finds our heroine singing about the joys of being alive, especially if you've sleepwalked through relationships or life, and come out on the other side, newly on fire. "I'm in love, I'm alive, oh, I'm burning," Rogers sings as the beat marches to a steady pace designed to fill stadiums. And on this gray and wintry Friday, Rogers' "Burning" is definitely keeping us nice and toasty.

Pop polymath Lafawndah drops "Daddy" today, from her forthcoming debut Ancestor Boy, and it's a mysteriously sensual slow jam that somehow manages to feel like it's about family dynamics, and how it shapes us, dysfunction and all, while also feeling like an exploration of coming-of-age sexuality. The music stalks the dark corners of a house full of secrets and roils like bodies rolling in the club. "Now is the time for you to know," Lafawndah croons in the chorus. Now is the time for us to hear Lafawndah like we've never heard her before.

Judging by how prolific he is, it's clear that Future lives in the studio. His latest album, as part of his Hendrxx alter-ego project, The Wizrd, feels more aligned with his impulsive rockstar tendencies than ever. The Travis Scott-assisted "First Off" cops inspiration from Dr. Dre (definitely a rockstar in his own right) and his West Coast classic, "Nuthin' but a 'G' Thang," and gives it a murky, Atlanta-trap update. And as Southern-bred icons, Future and Scott sound right at home blending their melodic styles together — a treat for their new generation of fans and lovers of old-school hip-hop alliances alike.

Toro y Moi's newest album Outer Peace is out today, and speaking of Future's enduring influence on modern trap, here is "Monte Carlo," an atmospheric trappy tune with distorted vocals and croons that lend an element of lovelorn nostalgia to a hip-hop genre increasingly defined by trends.

Australia's newest indie alt-pop group on the rise, Cub Sport drops their self-titled album today. "Video," featuring Mallrat is a steamier bop about... recording lovemaking and thinking about it later, but when have you ever heard it sound this pleasant and consensual, and dare we say, romantic?

John the Blind, a hitmaking machine for acts like Maroon 5 (no big deal), steps out of the shadows as an artist with a slightly anonymous identity. But that's all strategy, you see: as Sia once proved when she emerged wearing wigs and not showing her face in live performance, when an audience isn't distracted by an image, the music can speak for itself. And we all remember how successful that was. So, case in point: "Two Months," John the Blind's debut single definitely lives and breathes in a world of its very own — with incredible singing and quirky production, accented by funky breakbeats, catchy rhythms, and just a dusting of vocoder as a cherry on top. I can't quite make out what the song is about, but mystery is sexy, so enjoy "Two Months" for the excellence it is.

If you're not attuned to Norwegian pop upstart Sigrid's music yet, get into her raspy howl, smart lyrics, and yes, plentiful melodies on early tracks like "Don't Kill My Vibe" and confessional, newer offerings like "Raw." Once the magic of those pop gems have sunken, cleanse the palate with "Don't Feel Like Crying," which, while similarly vulnerable is also a work of science, truly. Whoever said a pop formula that works is inauthentic should really be crying, because Sigrid is the master of making her truth something we can all sing along to. Also it's worth noting that this track to me is like "No Tears Left to Cry," but make it fashion.