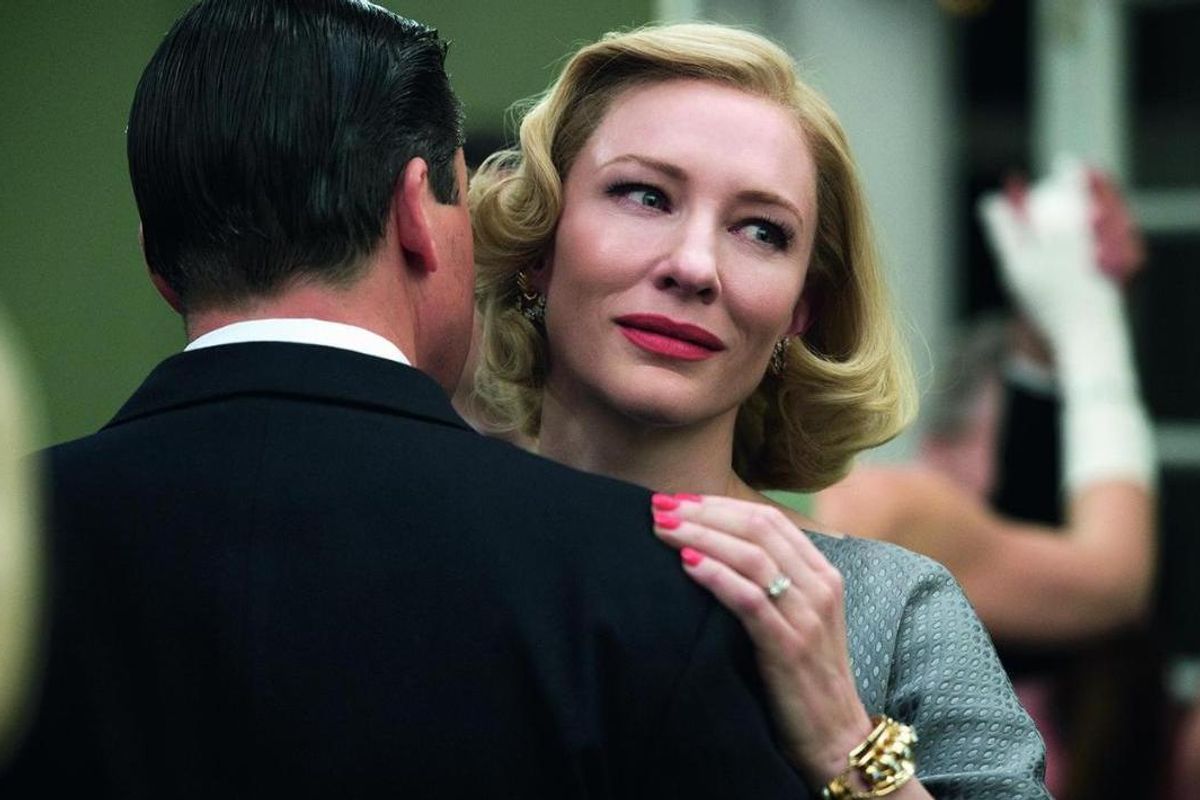 7 Movies to See In November

From Todd Haynes' new drama to an Irish thriller, here are the films you shouldn't miss.

Another milestone in the brilliant career of director Todd Haynes. Rooney Mara plays an aspiring photographer in 1950s New York who, while working in a department store, meets a beautiful, wealthy, mysterious older woman Carol (Cate Blanchett) buying a Christmas present for her daughter. They enter into a flirtatious friendship, while Carol battles her ex-husband (Kyle Chandler) who is threatening to use a "morality clause" to retain full custody of their daughter. The (always) wonderful Sarah Paulson plays Carol's dearest friend who once had a dalliance with her. This spellbinding masterpiece is one of lush romanticism without one drop of cheap melodrama or false sentimentality. That's in part to the whip-smart screenplay by Phyllis Nagy (based on a Patricia Highsmith novel), the gorgeous score by Carter Burwell, sumptuous and evocative costumes by Sandy Powell and dreamy cinematography by Ed Lachman. The sublime Cate Blanchett shows the fragility and passion behind the composed classy exterior and Rooney Mara is a revelation, not to mention having the screen beauty of a young Audrey Hepburn.

A riveting, sensationally good dramatization by director Tom McCarthy about the intrepid reporters for the Boston Globe who ripped the lid off the Catholic Church's systematic relocating of pedophile priests. Liev Schreiber plays the new editor of the newspaper who assigns the famed "Spotlight" team to find out if senior officials in the Church knew about certain bad priests and had lawyers pay off families and had court documents sealed under confidentiality agreements. The superb cast -- Michael Keaton, Rachel McAdams, Mark Ruffalo, John Slattery, Stanley Tucci, among them -- taut direction, and emotionally devastating drama make this film the best of its kind since All The President's Men. Just terrific.

Eddie Redmayne is pretty phenomenal as artist Einer Wegener living with his beloved aspiring painter wife Gerda (Alicia Vikander) in 1926 Copenhagen. As a lark Gerda dresses up her husband in drag and they go to a dance but it awakens deep feelings in Einer that he has suppressed all these years and out emerges "Lili." As confusing and complicated as this makes their relationship, Gerda's paintings of "Lily" really take off and they leave for Paris to continue Einer's path of discovery and transformation -- finally to participate in one of the earliest sex change operations. Director Tom Hooper's (The King's Speech) sensitive direction, combined with Redmayne's amazing physicality -- the way he tilts his head or moves his hands as "Lili," is quite exceptional. And the amazing Alicia Vikander is just perfection.

A poignant drama nicely directed by John Crowley (Boy A) about an Irish immigrant's arrival in New York in the 1950s. Saoirse Ronan plays Eilis Lacey, a young woman who gets sponsored by a priest (Jim Broadbent) to come to Brooklyn, leaving her mother and beloved sister behind in Ireland. She has a job in a department store, lives in a girl's rooming house run by the tart-tongued Mrs. Kehoe (an exuberantly funny Julie Walters) but is overcome with homesickness. Talking evening classes for book keeping and going to local dances she meets a handsome Italian boy named Tony (terrific Emory Cohen) and regains her self confidence, but a death in the family forces her to decide where her home really is. Domhnall Gleason nicely plays a handsome "catch" for her back in her village and Saoirse Ronan is quite lovely on screen -- her face retains a prim, shy, quietness, while her eyes empathetically register the depth of emotion she is going through.

A soul-stirring documentary by Amy Berg about the late, great, rock goddess, Janis Joplin. From a bullied childhood in Port Arthur, Texas, Janis Joplin journeyed to San Francisco at the height of the hippie invasion. She knew she had a big voice and sang blues in coffee houses but was hooked up with a rock band -- Big Brother & The Holding Company -- and infused her love for R&B singers like Etta James and Erma Franklin into their repertoire creating this howling, soulful, female Otis Redding persona. A treasure trove of archival footage is used -- from D. A. Pennebaker's coverage of the Monterey Rock Festival where her performance blew away people like Mama Cass to an electrifying recording session of Summertime. God knows she had her demons, but seeing Joplin in concert was to have your mind blown by her power and soulfulness, and this movie does her heartbreaking legacy proud.

A supremely scary Irish supernatural chiller superbly directed by Corin Hardy that mixes folklore and frights with equal dexterity. Joseph Mawle plays Adam who arrives to survey a dense woodland in Ireland with his wife Claire (Bojana Novakovic) and their baby. He is examining the trees in the forest and is warned repeatedly by neighbors not to disturb the restless spirits there. His first inkling that things are not right is when he discovers a desiccated deer carcass covered in black goo. And then frightful creatures appear and lay siege to their house.

James White
A shattering portrait of a loving son but troubled soul --- James White (Christopher Abbott) -- taking care of his dying mother (superb Cynthia Nixon) in Manhattan. James, still slightly reeling from the death of his estranged dad, takes off to Mexico to get his shit together. But his mother calls him, needing him to return home because her cancer has spread. Director Josh Mond's film feels brutally personal -- the camera is always jammed right in the lead's face throughout. This really pays off emotionally in scenes when James really gets drunk and out of control, calmed down by his best friend (an excellent Scott "Kid Cudi" Mescudi). You feel like you are inside his tormented skull. It's a tough film to watch, but there are moments of beautifully observed insights and heartrending poignancy. The electrifying performance of Christopher Abbott is so raw, furious, and thrillingly off the charts you feel grateful to have experienced it.