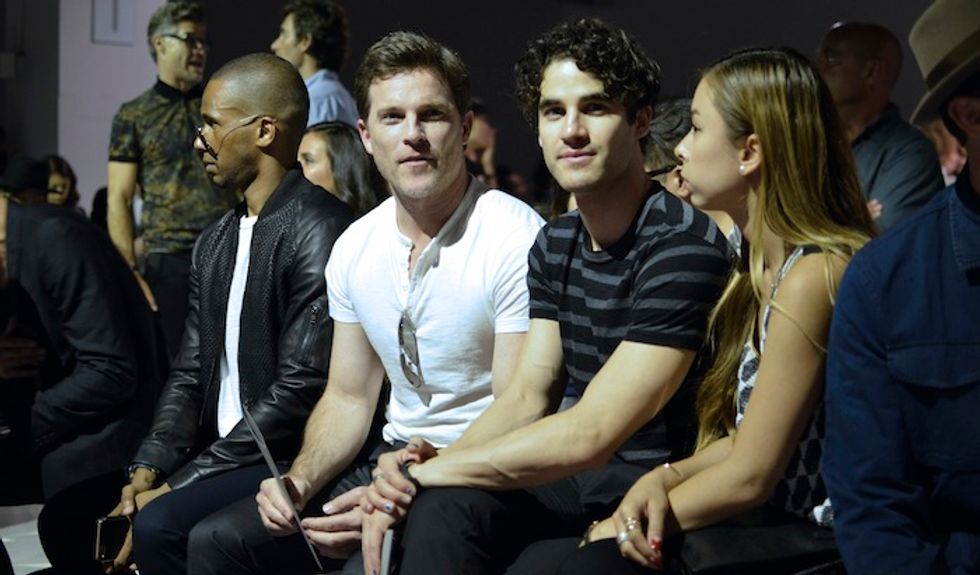 6 Hours at NYFW:Men's With Darren Criss

Darren Criss may have traded in his Glee-era bowtie-and-blazer for a blonde wig and denim booty shorts to play the title role in Hedwig and the Angry Inch on Broadway but off the screen and stage, the actor seems to find inspiration from what's going down the catwalk. He's often spotted front row during NYFW and the past few days he's made time to catch some NYFW:Men's shows as one of the CFDA's official ambassadors even amidst the final week of his Broadway run. We tagged along for the ride yesterday.

"The cool thing about Mondays is that it's Broadway's day off," Darren says as he recounts the Richard Chai dinner the night before, which he hosted with fellow CFDA ambassador Joe Jonas. We're in the back of an SUV heading downtown to Clarkson Studios for the Public School presentation. "He's wearing a Public School shirt," his stylist chimes in from the front seat.

Arriving at the show, we make our way inside Skylight Clarkson Sq relatively unnoticed. Darren snaps some pictures on his phone of Public School's models, lined up against a faux-prison wall, glaring out at a throng of onlookers also eagerly snapping mug shots. "They're playing soundbites from The Usual Suspects," he says. "This is very cool, I'm in."

A few moments later, his viewing is interrupted when reporters notice his arrival and begin to swarm around, attracting a sizzle of camera flashes from others.

About half an hour later, it's time to leave. Darren has a show tonight and decides to head home for a power nap (his chipping sparkly nail polish will need a new coat, though, before he steps onto the stage as Hedwig). Before our exit, Darren excitedly spots Bill Cunningham, smiling unassumingly from the sidelines. The fashion icon lifts his camera towards the Broadway star, and with a snap, Darren's face lights up. We scramble into the waiting car.

Lamenting the loss of a planned photo-op during lunch, Daren offers to jump out and stage one at a hot dog cart on the street. Everyone in the car laughs, unsure of whether or not he is serious. His excitement, however, is unambiguous.

Just before we part ways, Darren jokingly offers for us to join his nap session. Instead, we end up compromising for a selfie and plan to meet back up at 3pm.

We reconvene in the car. Darren, looking well-rested, has changed into a tee. A few minutes later, and we're back at Clarkson where we head inside for the Todd Snyder show.

Darren finds his seat front row, mingles with his neighbors, and exchanges smiles with a handful of other attendees before the lights dim.

With the last smattering of applause at the show's finale, the booming music dies down and the crowd rises almost collectively. Darren is ushered backstage, where he walks around curiously, lifting his phone occasionally to take a shot of the racks of clothes frantically being packed into boxes.

He chats with Mr. Snyder, smiles for a photo, and lauds the show briefly after an interviewer and cameraman inevitably surround him.

The end of the interview concludes his second day of NYFW: Men's, and he's out the door, ready to get back on stage.