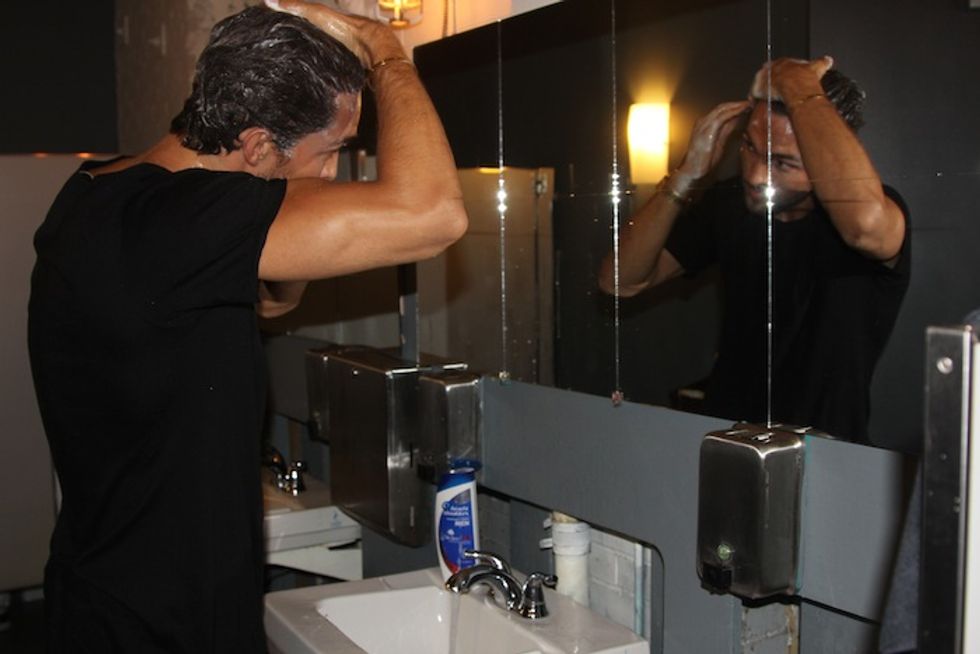 Having walked in countless shows for the likes of Dolce & Gabbana and Vivienne Westwood, campaigns for brands like Kenzo, Versace and Calvin Klein (where he appeared with his IRL girlfriend, model Jasmine Tookes), and editorials in V and Vogue, it's an understatement to say that Tobias Sorensen is an in-demand guy. So much so that's it's been a while since he's walked the runway for shows in his current homebase -- New York. With his return to the Big Apple to appear in NYFW: Men's, we had the chance to come along for the ride during a hectic day of shows.

Bursting out of his building behind two small dogs tugging at their leashes, Tobias runs over to me, apologetically explaining that he needed to take them out for a second and will be right back down. He is wearing black loafers, jeans, a tee, and a Yankees hat, and seems relatively calm considering the day ahead.

He heads back in and reemerges a few minutes later, this time with no dogs (but the same outfit). A large black SUV sits in front of his building, engine running attentively. I walk towards it, but luckily, I notice Tobias step into the street and raise his hand to hail a cab before I open the door to a car that's clearly not for us.

After several failed attempts to flag a cab down, Tobias takes out his phone to order an Uber. A white minivan appears in a few minutes and we speed downtown for the Michael Bastian show.

In the car, we talk about his summer routine (gym with his girlfriend, walking his dogs, and work), spending time at home in Denmark, and his newly- released campaign for Calvin Klein Eternity Now.

"It's by far the most exciting experience I've had modeling-wise" he says of starring in the campaign alongside his Victoria's Secret angel girlfriend, Jasmine Tookes. The two have already appeared as a couple in shoots for Vogue and V, but this is their first campaign.

"We both live in New York, and it's such an iconic American brand. It's something we can always look back at."

We pull up to Skylight Clarkson Sq, where we head around back and enter through the backstage area. After checking in, Tobias is ushered out onto the the runway with several other models for a walk through. "Stop and spin between these two columns!" a woman wearing a headset instructs, motioning a twirl with the pen in her hand.

Later, in the hair and makeup room, Tobias is instructed to take a bottle of shampoo to the bathroom and wash his hair. He returns, chats with the hair stylist who is ferociously spritzing and straightening his hair, then disappears to change before the show.

The show has just ended but Tobias is already late for backstage at the next one, Asaf Ganot, where he will open. "I'm supposed to be there at 11" he smiles. We push our way through the swarms of models and reporters after he says his goodbyes.

Hoodie up, Tobias leads the way through the rain towards our Uber, which has mistakenly arrived a block away. Inside the car, he makes a few calls in Danish, then tries Jasmine, who does not pick up, so he sends her a text instead.

We arrive inside the cavernous, dimly-lit, ArtBeam gallery. "Tobias!" A woman with a clipboard smiles excitedly, emerging from the dark. We follow her past the runway and into the backstage area, equally as spacious, but bright and humming with activity.

He smiles and says hello to familiar faces, and then, once again, is sent to the bathroom to wash his hair.

About an hour later, walkthroughs are over, hair and makeup is finished, and it's time to change before the show. "You've gotta walk out there either way," he smiles. He's not nervous about opening, and with almost a decade of runway experience, he shouldn't be.

Tobias snaps a picture with friend and model Anderson Noel and his brother Stanley
2:30 PM

The show has just ended, and press, stylists, and designers alike cheer and clap backstage, looking up at the live feed of the audience applauding and rushing to get a closer look at the models, now lined up along the runway.

Someone signals to bring the models back in, and Tobias reenters with the others as people pour into the backstage area. We shake hands and he thanks me in his soft Danish accent before snapping a picture with friends. Our six hours together are over, and it's time for him to head off to another show.