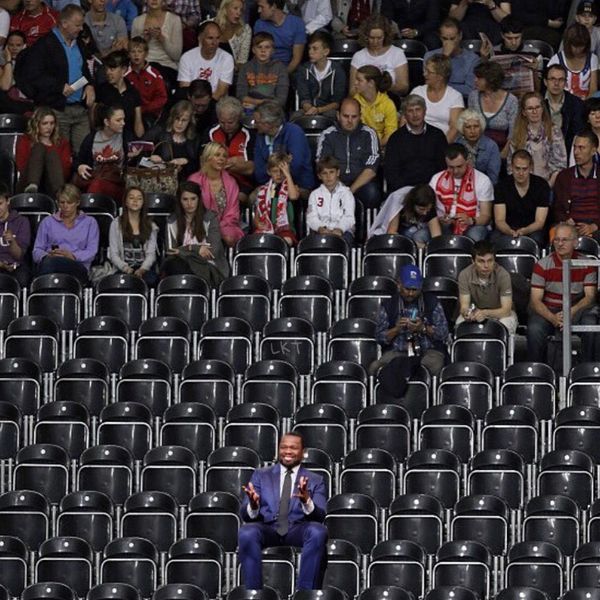 The decades-long feud between 50 Cent and JaRule definitely isn't ending anytime soon. The Queens-born rapper, whose real name is Curtis James Jackson III, took to Instagram on Friday to reveal his master plot against his long-time rap nemesis. Apparently, he bought all the front row seats for an upcoming JaRule concert, only to leave them completely empty.

According to Complex, Fif first teased this petty play with a since-deleted screenshot of a Groupon for seats for JaRule's November 9 concert. In the alleged post, he said, “People think I'm mean so go see this. $15 bucks wait what I do now LOL." In the comments section of the alleged post, he confirmed that he bought a total of 200 front row seats, with the intention of leaving them empty just for spite and just for his own kicks.

Since this post was deleted, the rapper also posted a photoshopped pic showing what would be JaRule on stage, and empty front row seats. He then posted another pic of him photoshoped into the empty bleachers, smiling smugly, with the caption, “What a show, I mean just fucking great. Do it again my kid went to the restroom. LOL."

50 Cent on Instagram: “What a show, 👏I mean just fucking great. Do it again😆my kid went to the restroom. LOL #bellator #lecheminduroi”

Personalities like rapper Snoop Dogg and Van Lathan have commented, urging 50 Cent to “Stop” and to “Let [JaRule] live.” But it doesn’t seem like any of this will change his mind. He also posted a statement that seems to address his critics who think he’s gone too far with this power move. He said, “I’m the judge when enough is enough,Suckers don’t deserve mercy.I have no sympathy, I’m fresh out of empathy.”

Guess we'll just have to see if the plan pulls through on November 9.