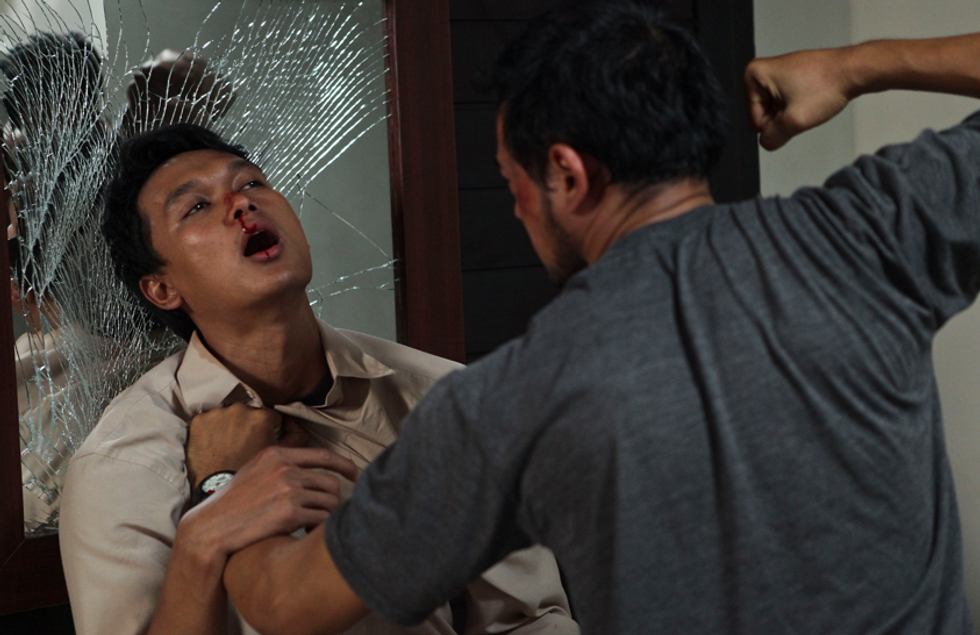 Mommy
Winner of the Jury Prize at the 2014 Cannes Film Festival, Canadian director Xavier Dolan has crafted one of his most emotionally devastating films in this vivid portrait of the turbulent relationship between a widowed mother, Diane (played by a sensational Anne Dorval), and her volatile teenage son Steve (played by a terrific Antoine-Olivier Pilon). Trying to home school this wild child and work to pay the bills becomes an insurmountable nightmare for Diane, which is remedied by a mysterious neighbor, Kyla (Suzanne Clement), a stuttering teacher and mom on sabbatical living across the street. The three become a weirdly close family unit almost divorced from the real world. Xavier Dolan still likes to play with the framing device -- the screen shrinks or expands to underscore the emotional landscape. But this film lovingly and painfully examines this combustible mother/son relationship with true compassion and savage poetry.

Predestination
A guy walks into a bar, right? The bartender (Ethan Hawke) offers a free bottle if the stranger's life story is especially bizarre, and there unfolds a wild tale of abandonment as a child, a troubled life in an orphanage, space camp, unwed pregnancy, even gender reassignment. But that pales in comparison to the bartender's subsequent time-travel proposal. A real cosmic pretzel of a movie directed by the Spierig Brothers (Daybreak) and based on a Robert A Heinlein short story. Sarah Snook is particularly amazing in this intriguing film that twists your brain as much as staring at a M. C. Escher drawing.

Wild Tales
So true! This wickedly funny film by Damian Szifron consists of six twisted tales of revenge.  The film covers everything from road rage and weighing the consequences of poisoning the man who destroyed your family to a hit & run accident that bizarrely turns into a sleazy business deal and one man's fury at having his car towed, which literally destroys his life. The finale is a wedding celebration from hell that is gloriously deranged. That section alone shows the director's style, nerve and unpredictability factor. A sardonic bitch slap of a film.

Killers
Brutal, slightly long, but ultimately mesmerizing, this film by the Mo Brothers centers on two killers from different countries who bond on the Internet. Nomura (Kazuki Kitamura) is a handsome Tokyo-based ex bond trader and a psychotic serial killer of women who films his atrocities and posts them on the web. Bayu (Oka Antara) is a disillusioned ex-journalist in Jakarta estranged from his wife and daughter who reaches out online to Nomura after he kills a cabbie, and his accomplice, who attempt to rob him. Nomura encourages Bayu to embrace the murderer in him. Some sequences will scorch your brain with their darkness and fury.  A nihilistic, compelling exploration of senseless violence and its horrifying consequences.

Beloved Sisters
An epic (170 minutes) but elegant movie by Dominik Graf about the mÃ©nage a trois between famed writer and philosopher Friedrich Schiller (Florian Stetter) and two sisters -- Charlotte (Henriette Confurius) and Caroline (Hannah Herzsprung) Von Legefeld. Beginning in 1787 Charlotte becomes entranced with Friedrich when beneath her window he asks directions one day. But aside from writing a controversial play, "The Robbers," Friedrich seemed a poor prospect for a suitor. But early on the two sisters make a pledge to stay true to Schiller. They even correspond in a secret code, and once when he almost drowns, strip him in the woods and warm his body with theirs. Caroline, with Schiller's help, even published a novel "anonymously" called "Agnes Von Lilien," which was wildly popular. Another puzzle piece in in this strangely fascinating film.
You May Also Like
Music