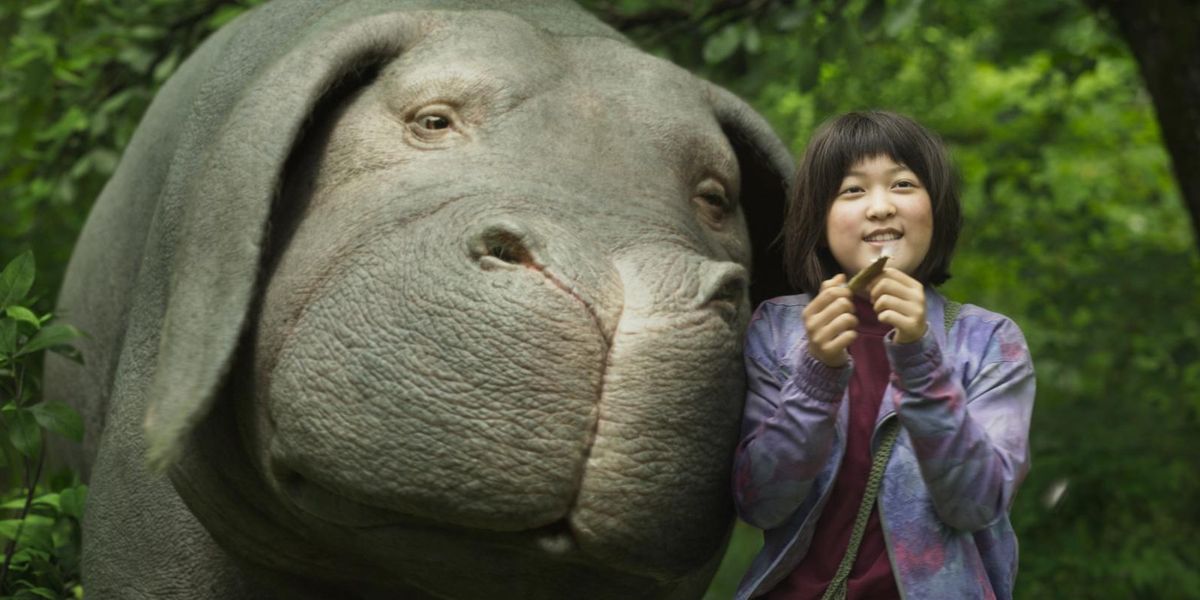 5 Movies to See in June

In Bong Joon-ho's glorious new film, little 14-year-old Mija (An Seo-Hyun) raises a gigantic, genetically modified pig she has named Okja in the mountains where she rustically lives with her Grandfather. This is part of a ten-year-plan created by the CEO of a food corporation (Tilda Swinton) of sending these lab-created creatures to different parts of the globe and seeing which farmers raised the finest ones. The early scenes with Mija and the lumbering, hippo-sized pig with a bovine face frolicking in the streams and mountains are infinitely magical. But suddenly the corporation arrives and whisks this creature away to New York for the big ceremony and Mija recklessly races towards Seoul to prevent them from shipping her pig to the States. There she is aided by an animal rights activist group led by Jay (Paul Dano) and K (Steven Yeun). Some characters -- like Jake Gyllenhaal, who plays the frantic, fey, host of a TV animal show -- go a little too far with the cartoonish characterizations. Others, like Paul Dano and Giancarlo Esposito, play more naturalistically which works better. But as this story hurtles towards a desperate race against the clock to save Okja, you are so caught up emotionally in the love this little girl has for this beast that nothing else matters. Technically it's a true wonder from beginning to end.

Rollicking free-wheeling comic adaptation of stories from Boccaccio's bawdy The Decameron, set in 1347 at a convent where the nuns live in a hothouse atmosphere rife with lechery, lesbianism, paganism and just plain gossip. Pretty Sister Alesandra (Alison Brie), dumped there by her father, dreams of a marriage proposal as an escape. Foul-mouthed, hot tempered Sister Fernanda (Aubrey Plaza) is sneaking female friends in for drunken nights of revelry. Sister Geneva (Kate Micucci) is busy gossiping to Mother Superior (Molly Shannon) about her other sisters' indiscretions. Father Tommosso (John C. Reilly) has a fondness for the sacrificial wine. Into this comes poor Masseto (Dave Franco) on the run for his life after having repeated sexual indiscretions with his master's wife (wonderful Lauren Weedman). He pretends to be a deaf mute and becomes the new gardener/handyman but in no time is getting hit on by the lascivious nuns. Director Jeff Baena forgoes putting on "ye old" accents and the end result is genuinely funny. Dave Franco is really adorable as the hapless object of holy lust, and Aubrey Plaza, who was so spectacular in the TV series Legion, is gloriously mean and hilariously contentious.

Sublimely bittersweet comedy written, directed and starring Demetri Martin, in which he plays Dean, a young man unstuck by grief because of his mom's death. Living in Brooklyn. he is struggling to finish his second book of "whimsical" drawings and the combination of his friend's wedding, his break up with his fiancee, and his dad (Kevin Kline) considering selling the family house causes Dean to impulsively jump on a plane to California, ostensibly for a business deal, but really to clear his head. There he unexpectedly meets a lovely, interesting girl (Gillian Jacobs) and puts off returning to New York and dealing with his grief. Martin cuts an oddball but appealing figure on screen, and the dreamy score and those wonderfully droll drawings just create the right mood for this melancholy, yet funny, meditation on loss and love.

Tender portrait of acclaimed Canadian folk artist Maud Lewis (Sally Hawkins) by director Aisling Walsh. Maud, stricken from birth with crippling arthritis, was shuttled to live with unfriendly relatives in Nova Scotia. She answers an ad for a housekeeper at the local market and lands in the small remote house of grumpy, misanthropic fish merchant Everett Lewis (Ethan Hawke). Maud's escape from her unhappy life was to paint -- on cardboard, metal, on the walls of the tiny home she shares with the brutish Everett, and before long she becomes well-known and revered for her folksy paintings of snowbound vistas, birds, and other nature imagery. Everett slowly comes to love the strange, crooked but sweet, little woman. Sally Hawkins and Ethan Hawke elevate this material from being mawkish with the strength of their performances. Hawkins gives Maud a delightful offbeat, sly, humor that is infectious. Kari Matchett does a nice turn as a vacationing New Yorker who sees the magic in Maud's painting and encourages her.

A 4K restoration of director Toshio Matsumoto's influential black and white 1969 film set within the transgender underground scene in Japan. An experimental fever dream centered around a gay club called Genet were the Geisha-looking male Madame is losing her boyfriend to the pretty young hostess Eddie (played by "Peter"). Politics, drugs, art, underground film all weave in and out, not to mention documentary interviews with the cast with questions like: "Are you happy being a gay boy?" And it all ends with a bloody, melodramatic, take on Oedipus Rex of all things. Supposedly a big influence on Stanley Kubrick for A Clockwork Orange.