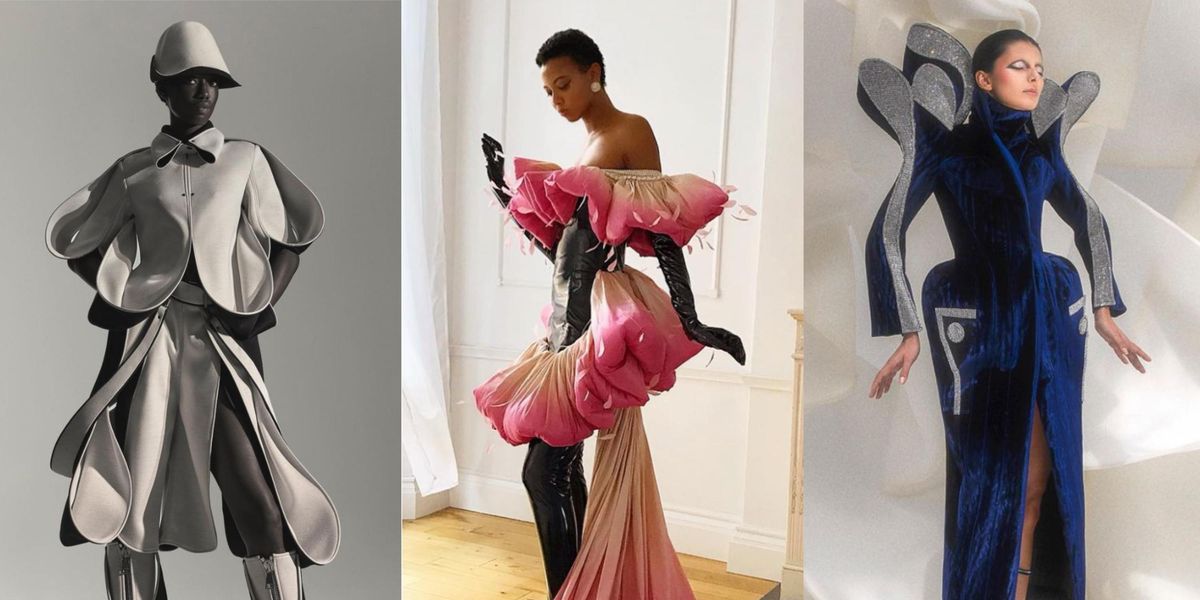 Though 2020 has been a challenging year for many established fashion names, it's also seen an explosion of emerging talent. From recent Central Saint Martins grads to reality TV competition winners, the abundance of exciting new designers were our brightest lights in a truly dark year. Some gained recognition from Netflix, others gained traction from Kylie Jenner, and many are learning how to run their own businesses after launching their brand during a worldwide pandemic — but all of them possess exceptional skills that left a mark on the industry. Whether their brands have been around for a few years or a few months, these creatives enhanced our understanding of what fashion is — and what it can be in the future.

Below, read on to learn about the 21 breakout designers we'll be watching in 2021.

One of the year's most noticeable breakouts, the design duo's brand Chopova Lowena has become a street style gem worn at Fashion Weeks everywhere (and by Harry Styles in his now-iconic Vogue editorial). The Bulgarian brand's patchwork skirts have quickly become bestsellers on Dover Street Market and Matches, and Chopova and Lowena earned nominations for this year's LVMH Prize for Young Fashion Designers.

Minju Kim started 2020 on a high note, quickly gaining celebrity status for her win on Netflix's design competition show Next in Fashion. Since her star's been on the rise, the South Korean designer has released two bestselling collections on Net-A-Porter that feature her signature muted colorways, romantic volumes and feminine details.

Since graduating from Central Saint Martins in 2017, Ogunlesi's namesake brand Mowalola has become known for its provocative, gender-fluid designs. The Nigerian-born designer's pieces consistently draw inspiration from the '70s and psychedelic rock, making numerous statements that are sexy and subversive — like her bullet wound dress worn by Naomi Campbell. The 25-year-old quickly became a household name when she was announced as the design director for YZY Gap.

British designer Steven Stokey-Daley had one of this year's most memorable fashion moments, thanks to none other than Harry Styles. His namesake brand S. S. Daley was behind Styles' billowing shirt and floral trousers in the singer's "Golden" music video. The University of Westminster graduate's made-to-order business model ensures that his pieces are both fashionable and sustainable, which we're looking forward to seeing more of as his brand grows.

British-Indian designer Supriya Lele frequently combines her cultural heritage with grunge style, resulting in pieces that are both modern and pure rock 'n' roll. After debuting at London Fashion Week in 2017, the designer's trajectory has only gone upwards since her twisted sheer dresses grew in popularity (as seen on Dua Lipa and Kendall Jenner). This year, she also triumphed as a design innovator after becoming a finalist for the 2020 LVMH Prize.

Andrea Brocca is an especially fresh face in fashion — the designer just graduated from Central Saint Martins in London this spring — but has already garnered a range of career-making accomplishments. After opening his own boutique in Dubai, Brocca was titled "World's Youngest Couturier" by the Guinness Book of World Records at just 16 years old. As part of the class of 2020, his graduate collection was released online this spring — and thanks to a dazzling array of voluminous, cinched and dramatic draping (which even found their way to Lady Gaga), it's become one of the most celebrated couture lineups of the year.

British designer Robert Wun launched his namesake label in 2014, focused on sculptural and elegant pieces, but he really gained traction in 2020. Wun's East Asian heritage is present in all of his collections, whether through pleated skirts or balloon-sleeve tops. As a designer that's focused on the future, it makes sense that Wun pursues similar projects; he was recently featured on the new digital fashion channel Culted.

Jedidiah Duyile's Loudbrand Studios went instantly viral this year — though that almost didn't happen. One of Duylie's dresses appeared on Kylie Jenner, who originally didn't tag the brand on Instagram. This prompted a since-ongoing debate over the importance of celebrities tagging the brands that design their clothing, and everything on Loudbrand's site sold out instantly. Since then, Loudbrand has become widely known for its approach to colorful, tight separates and sexy dresses, as well as a platform to empower Black women.

Colleen Allen's dystopian pieces made a splash this season at New York Fashion Week, after premiering in a digital video during the Spring 2021 shows. The Central Saint Martins graduate, who previously studied at Parsons and interned under Wes Gordon, crafted her debut show in CGI (though the clothes are real). The virtual presentation featured utilitarian jackets, sheer tops and oversized suiting, establishing Allen as a disruptor when mixing fashion with technology.

Brandon Blackwood gained massive press coverage this year as a key designer to watch on the accessories front. In 2020, the Jamaican-Chinese designer's fame skyrocketed once his "End Systematic Racism" mini totes dropped after nationwide civil rights protests. After additional promotion by Kim Kardashian West, they instantly went viral and are regularly sold out. Consider our eyes peeled for Blackwood's next drop — and all of his future creations.

After graduating from Central Saint Martins in the midst of a global pandemic, Sohee Park has emerged as a notable 2020 graduate. After interning at Marc Jacobs and Molly Goddard, the Korean designer's bold, whimsical pieces inspired by florals have become instantly iconic from their voluminous sleeves and brilliant colors. Just this year, she created gowns that appeared on the cover of LOVE and were worn by Miley Cyrus, and even made a dress with Christian Cowan for his Spring 2021 show — cementing her status as a rising fashion star.

Adebayo Oke-Lawal's Orange Culture debuted last year at New York Fashion Week, and has been making powerful statements ever since. Oke-Lawal's Nigerian heritage is woven throughout his collections' colors, prints and adrogynous streetwear, making it a strong symbol of the designer's past and present. And the fashion world has taken notice; this fall, Orange Culture is among the brands picked up by The Folkore which carried over into its new partnership with Farfetch.

Since graduating from Central Saint Martin's in 2015, Daniel W. Fletcher cut his teeth at various European fashion houses (Louis Vuitton, Burberry and Lanvin, to name a few) before launching his namesake brand, which counts Tommy Dorfman and Harry Styles as fans. Fletcher's contemporary unisex pieces gained even more media attention once he starred in Next in Fashion alongside Minju Kim, and he recently designed a T-shirt with Choose Love to provide resources for displaces refugees.

An alum of Yeezy's first incubator grant, Schloss designs vibrant printed slip-dresses and sheer tops for her brand Maisie Wilen. Since creating the namesake label (titled after her mother's maiden name), her Y2K-esque creations have been spotted on celebrities like Megan Rapinoe and, of course, North and Kim Kardashian West. She recently made waves with her Spring 2021 digital presentation at New York Fashion Week, and launched her own store on Depop this fall.

Theophilio is the brainchild of Brooklyn-based designer Edvin Thompson. Since he launched his label in 2016, all of Thompson's collections for Theophilio directly reference his Jamaican heritage and typically incorporate upcycled materials. His most recent, "Migration," was shown this September at the first digital New York Fashion Week and accompanied by a short film paying tribute to his roots.

Elliss Solomon launched her brand Elliss in 2016, after graduating from Central Saint Martins. Focusing on sustainability, Solomon's pieces are all made with nontoxic dyes at local manufacturers in her native London. Most recently, Solomon dropped her latest collection, notable for its bold collage and patchwork prints.

Kika Vargas is a designer working between Madrid, New York and her native Bogota, which serve as the main influences behind her line. After working for Missoni following graduation from the Istituto Marangoni, the Colombian designer launched her namesake brand, which often features dramatic pieces like tops and dresses with exaggerated puffed sleeves. This year, Vargas' profile increased even higher at Fashion Week as part of Bergdorf Goodman's BG Radar platform, which fosters emerging talent in the store's inventory, displays and magazine.

After launching this July, Maryann Msengi's Farai London went instantly viral after being seen on Kylie Jenner. Since the summer, her separates, bodysuits and dresses have continued to gain exposure for their figure-hugging silhouettes and vibrant colors. Msengi's inspirations also stem from the early 2000's and international travel, which can be seen through details like deep necklines and cutouts.

Another BG Radar recipient, Petar Petrov creates pieces that are both feminine and fluid. The Vienna-born designer's recent Pre-Fall 2021 collection features plenty of tailoring, and voluminous separates in relaxed silhouettes, which he's become known for. Knit dresses, straight-leg trousers and flowing dresses all played a part in Petrov's latest line, which was released to the fashion world through an online video.

After graduating from Brown and working at Tracy Reese, Sheena Sood took a trip to India and Brazil that would eventually become the basis for her sustainable label, Abacaxi (meaning "pineapple" in Portuguese). Whether they're tie-dyed turtleneck tops or voluminous dresses, all of her designs integrate vibrant colors that are both enchanting and bold, alongside details like mirrors or crochet. This can also be seen from Shood's many design inspirations, which range from her own Indian heritage to Ashish and Mariah Carey.