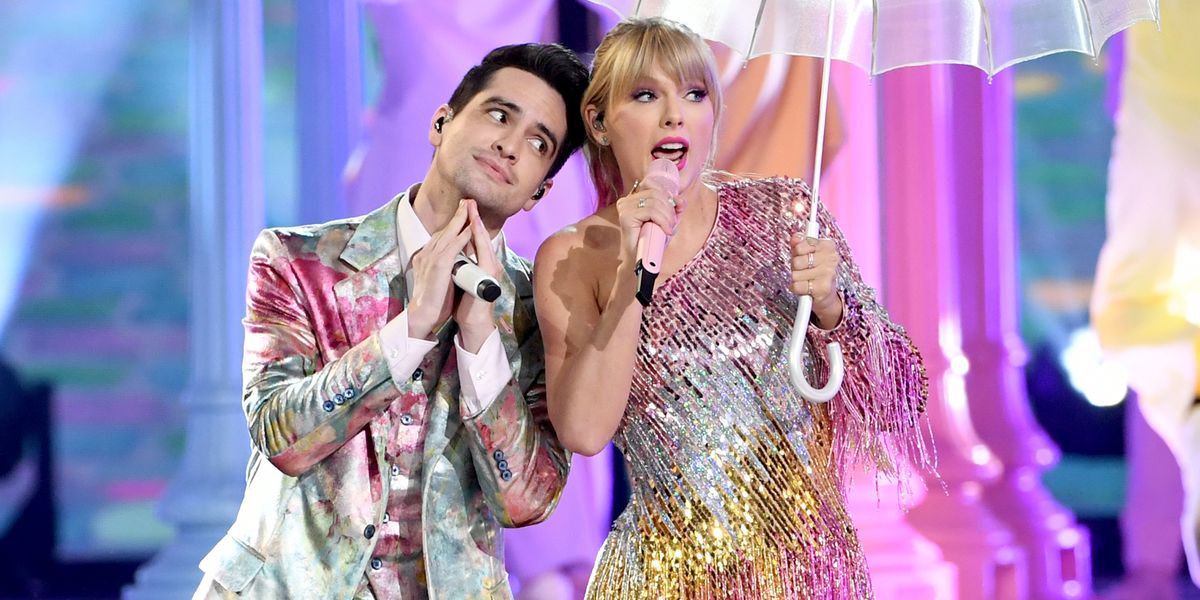 The 2019 BBMA Performances: Spectacles and Firsts

Last night's 2019 Billboard Music Awards performance lineup was full of firsts. This is not exactly new when considering how award shows over the years have become savvy marketing venues for the music industry's biggest names. That said: Kelly Clarkson hosted for the second year in a row as everyone from Taylor Swift to Madonna's holograms stormed Las Vegas' MGM Grand Garden Arena stage to promote, promote, promote. And entertain in a very big way, of course! Here are the some notable caps from last night that everyone will be talking about today, plus unforgettable moments that deserve honorable mentions.

Human Easter eggs Taylor Swift and Panic! at the Disco's Brendon Urie performed collaborative single "ME!" which received a record-breaking video that we can mostly describe as a pastel-colored fever dream pulled from children's storybook land. Upping the ante with an equally astronomical production budget, Swift did not miss this golden opportunity to turn the already delirious camp of "ME!" into a bonafide Cirque du Soleil-style Vegas revue — especially since it's the song's first live rendition.

A marching band in baby pink pastel outfits opened the song (which, the Internet is in a tizzy over whether or not she stole from Beyoncé). And Swift as ombre-haired majorette, shimmied about the stage in an off-shoulder, rainbow-sequined fringe minidress by Jessica Jones and her stylist, Joseph Cassell, with custom Stuart Weitzman baby blue leather booties covered in rhinestone, no less. Urie, for his part, swooped into the performance like Mary Poppins, via bedazzled parasol. What other way is there to open a three-hour awards show? (See also: Kelly Clarkson covering all of the hits).

Halsey performed twice during the awards, first to sing her chart-topper "Without Me," then reappearing for a first-ever performance with BTS. The K-pop supergroup and the queer singer performed "Boy With Luv" from BTS' newest EP Map of the Soul: Persona, and then their song "Mic Drop," which was its own moment, but that's not what stans are talking about. Fans are calling the BTS x Halsey team-up the collaboration of the year on Twitter, and honestly, it was somewhat hard to hear the vocalists over all of the crazed, nonstop screaming and high-octane choreography. In color-coordinated pantsuits! Halsey's was a nice champagne color, in case you were wondering. But when you're at a BTS show, I imagine it's less about the music than it is about the spectacle.

This duo was forged through the power of Madonna's Madame X sessions, and we first heard them together for that upcoming album's lead single, the summery "Medellín." Days later, we were treated to a trippy wedding party video (with cha-cha choreo and horses!) by Spanish director Diana Kunst and artist Mau Morgó. For the Billboard Awards, the two twirled about elaborate staging that included fake rain, holograms of Madame X alter egos, and vignettes including Colombian speakeasies and a sunset-lit countryside. The whole thing reportedly cost $5 million. Madonna danced in a chorus line with her AR alters, and at one point, climbed onto a table and shimmied around. Maluma led some cha-cha with his duet partner during the song's chorus. Cute!

Ariana Grande is busy, following her headlining Coachella set and continuing her Sweetener World Tour and all, and since T-Swift took the opening slot at this year's Billboard Awards, this year's ceremony was all the more reason for Grande to opt in remotely. Grande's tour performance of "7 Rings" was perhaps not a first, but definitely one for her at this year's awards. She gave some Vancouver stop pre-recorded teas of her Number One bop, screened for the BBMAs in partnership with T-Mobile. I've always wondered how this sort of things works for those watching in Vegas. Is it like watching a hologram, which would honestly be cool, or is it almost as though Grande herself is right before our eyes? Technology! Anyway, because Grande loves us so much, we got a bonus performance of Dangerous Woman's "Be Alright," "handpicked by Ari" herself. Enjoy!

Honorable mentions: Paula Abdul closed the show with a career-spanning medley, with a hologram feature by the cat from "Opposites Attract" (And accidentally injuring Julianne Hough's neck with her oversized hat!) Ciara's never-not-sexy, Janet Jackson-channeling stage presence, as seen in her performance of Beauty Marks single, "Thinkin Bout You"! LBD Icon Mariah Carey being honored as an icon, performing her own medley, and possibly still Not Knowing Her! For those of us who love a dazzling Vegas moment, too much is simply never enough.