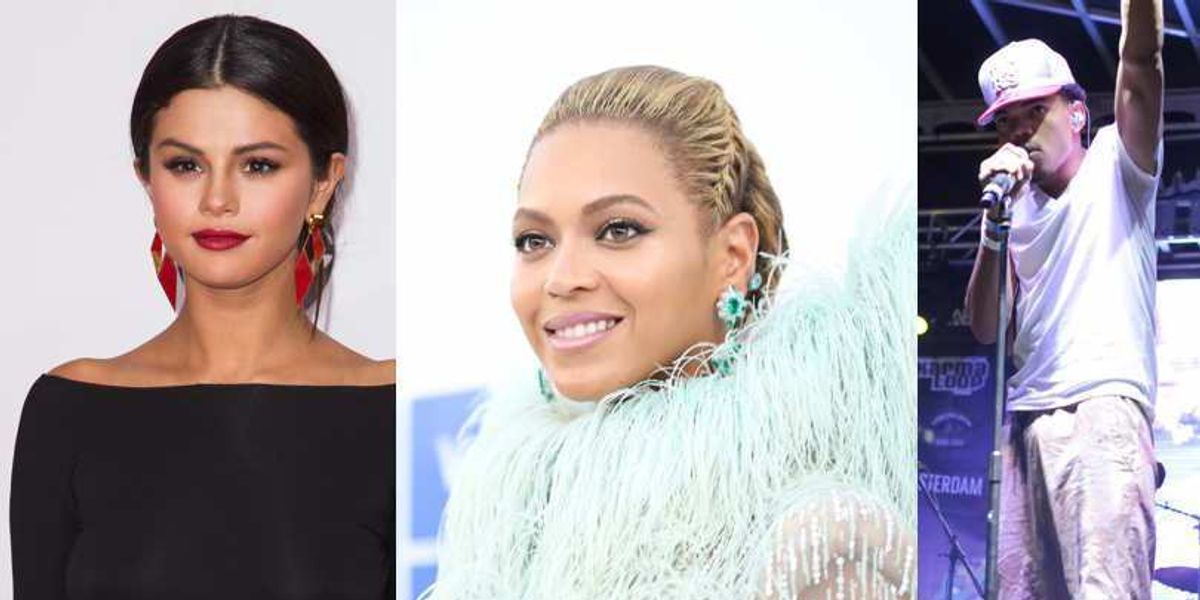 2017 Is the Year for Pop to Embrace Its Power

And reach its full political potential.

Somehow, we managed to survive 2016. On top of losing so many of our artistic heroes, we also lost what felt like the last semblance of hope as the Trump administration began ushering in an era of desperation and hate.

And that's why 2017 seemed so welcome. Logic aside, we told ourselves it was a fresh start and a blank slate; a way of breaking from the 2016 shitstorm and getting ahead on what promised to be a daunting next few years. Despite understanding how time and space work (read: we know we can't simply pin tragedy to a single year), 2017 still seemed so bright and shiny in comparison to its predecessor -- it had yet to be marred by the loss of the people we loved or the surprise of an election upset. It was free of "me at the end of . . ." memes and hyper-documented celebrity relationships. Its potential was -- and is -- vast.

But that vastness especially applies to the state of pop music as we know it. Where 2016 was heavy into realism, the acceptance of failure, and the celebration of one's own shortcomings, 2017 requires that and more. To embrace vulnerability is a feat of strength in itself, but now we need music that also calls for us to power up -- to use our shitty realities, our capacities for failure and fuck-ups, and parlay them into power, particularly after Trump's inauguration. Self-reflection is merely the foundation on which we'll build our empire.

Which isn't to say that self-reflection isn't key to empowerment -- it is, and 2016 delivered a landscape unto which it was welcome. The Weeknd used Starboy to draw our attention to the pitfalls of celebrity, shattering the myth that excess leads to happiness, while Beyonce used infidelity as Lemonade's starting point for discussions of feminism, race, and the complexities of relationships. Even The 1975's I like it when you sleep, for you are so beautiful yet unaware of it articulated the melancholic reality of falling out of love, but without giving way to a two-dimensional Sad Boy™ narrative.

Ultimately, these albums (and albums like them) sparked conversation, inspired change, and even granted permission for listeners to embrace the shittiness of heartbreak. And others, while not quite as deep, still created space to acknowledge the complexities of being a person. Where The Weeknd used his record to shed light on the fickle nature of fame, Drake used VIEWS as an extended "poor me" narrative, listing the reasons his life was hard (and why going to certain Cheesecake Factory locations proved difficult). Justin Bieber's singles were all an exercise in the admission of his own flaws, while Lady Gaga poured realism into Joanne, creating a record that stripped her of her mythic persona and pointed to her humanness. In short, the pop landscape of 2016 allowed us to use music to articulate our fears, our vulnerabilities, and the realities of failure. And now we need to build on those themes to survive the coming months.

Especially since creating art under the premise of being real is an important step in powering up. By acknowledging unhappiness or insecurities, pop artists not only remove any cloaks of secrecy they may have been operating under, they also make it less taboo for listeners to do the same. And that can lay the groundwork for frank discussions about everything from gender norms to professional success to the political climate. Albums like Coloring Book, Untitled Unmastered, and even Anti are calls to action, rooting themselves in honesty while inciting more than just a passive listen (particularly when you think about the way Chance the Rapper left room for optimism while making us think).

Which also says a lot about what we want, and what will help us keep powering up. As 2016 handed out disappointment after disappointment, it's not surprising that we honed in more and more on albums and artists who shied away from Taylor Swiftian narratives; that we replaced bright and shiny pop with those who didn't deal in escapism. Boy bands broke up, boy band alumi sang about romantic dysfunction, and even Nickelodeon and Disney grads like Ariana Grande and Selena Gomez sang frankly about sex and relationships instead of the romanticized notion of either that landed them on the top 40 in the past. We wanted real talk and responded accordingly when musicians obliged. Through their vulnerabilities and their openness and their unwillingness to glaze over their own realities, we found strength to do the same.

So from there, we keep building. We made it through 2016 by using music to acknowledge our real selves, and now music will give us the strength to make it through 2017. Here's hoping it's through more call to actions, more call-outs, and even the declaration of strength in and of itself. While vulnerability makes us strong, we can't forget that artists like Beyonce and Rihanna -- who cite their own greatness and harness it accordingly -- live up to their own mythos because of the belief they have in themselves. So while the pop of 2016 made us self-aware, the pop of 2017 must make us strong. Especially if it's going to be our soundtrack for a year of resistance.