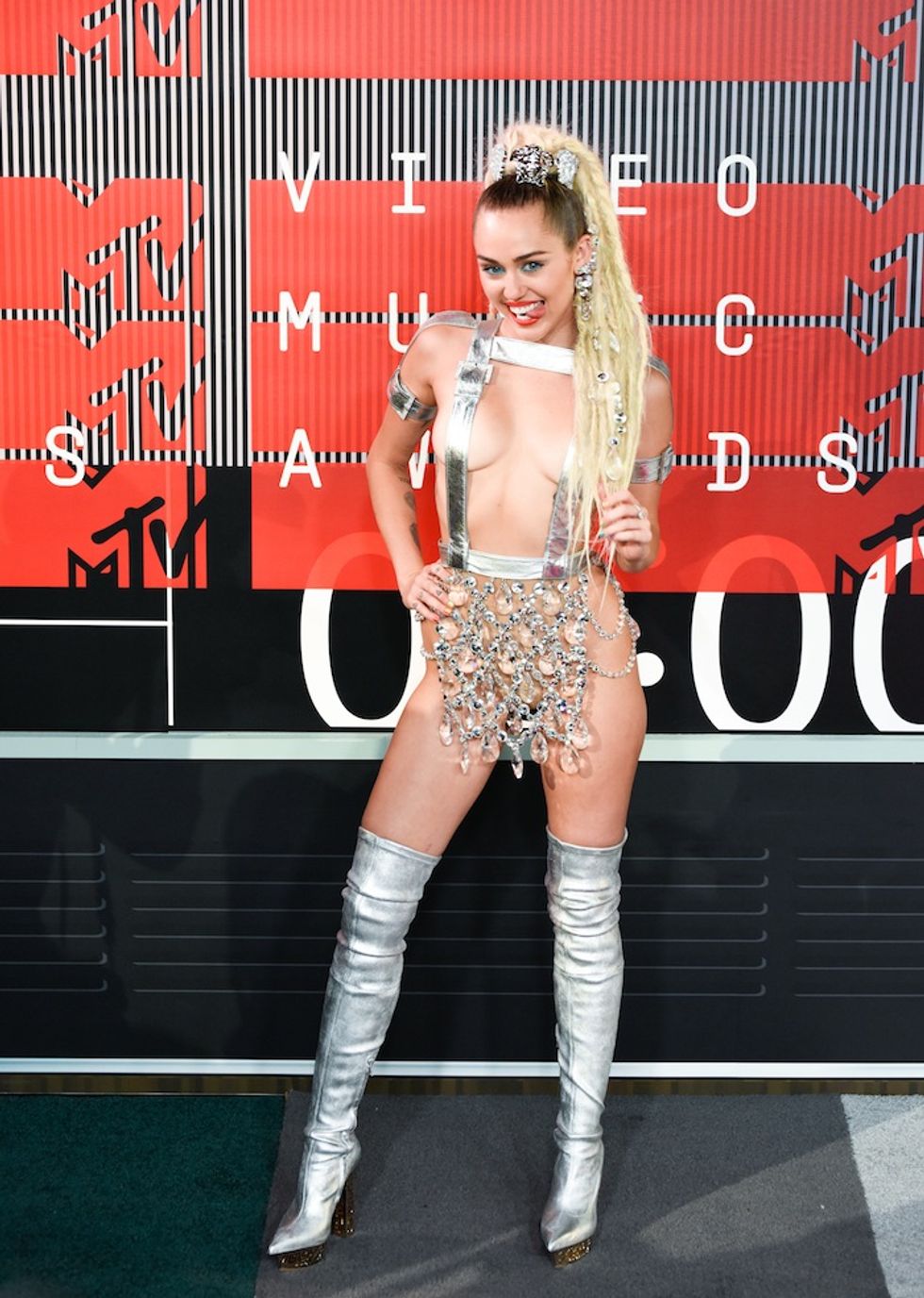 by Drew Elliott
PAPERMAG
[Photo by Owen Kolasinski/BFA.com]
Gone are the days that you looked to MTV to watch music videos, we have YouTube for that. Carson Daly isn't there anymore to debut new artists or introduce us to things that made headlines.

But finally last night, MTV seemed cool again. They turned their famous, "I want my MTV" on its head and asked, what do fans want from MTV? -- and then they gave it to us in two and a half jam-packed hours of controversy, nostalgia, and performances that were a modern iteration of the network's heyday.

We have been watching across social media as Miley Cyrus, the host of this year's awards, prepared for the big night. We knew that Pharrell, the Weeknd, and Nicki Minaj were going to perform, but what we didn't know is that this year the producers and wizards behind the VMAs really had their modern thinking caps on.

Jeremy Scott (one of PAPER's Current Cover Boys) designed the Moon Man and the red carpet, feuds would be fueled and disbanded between Cyrus, Minaj, and Taylor Swift, Justin Bieber would fly, a hip artist like Jen Stark would make trippy graphics, Snoop would bake pot edibles, and last but not least, Kanye West would announce his Presidential candidacy for 2020. Everything about it seemed young and on point as opposed to a bunch of old people trying to pander to young people. They didn't make announcements about the hashtags that you should use for the show, cause young people already knew them. They mixed in iconic footage from years past to remind us who watched those moments live, back in the day -- the heritage of the brand.  Even the sponsorships made sense. Pepsi seemed cool for helping to put a stage in the hip part of Downtown LA.

Every moment of the show had you on the edge of your seat or gunning to read the tweets and wanting more. I am not sure what this means for the music video industry, but I can tell you that MTV finally has the pop culture joystick back in their hands and they are firing with all cylinders. MTV was changing culture with these VMAs, they were bringing something new to the social conversation as opposed to filling their most important night with bad mashups of bands that seemed like they bought their way onto the bill. The fans came first this year, and this was like an MTV LSD funhouse of familiar faces.

While you can see all these musicians and artists everyday online, and you don't have to wait for a video to premiere, it was fun to watch as the world saw the madness unfold all at once. I guess I once again want my MTV.
You May Also Like
Care