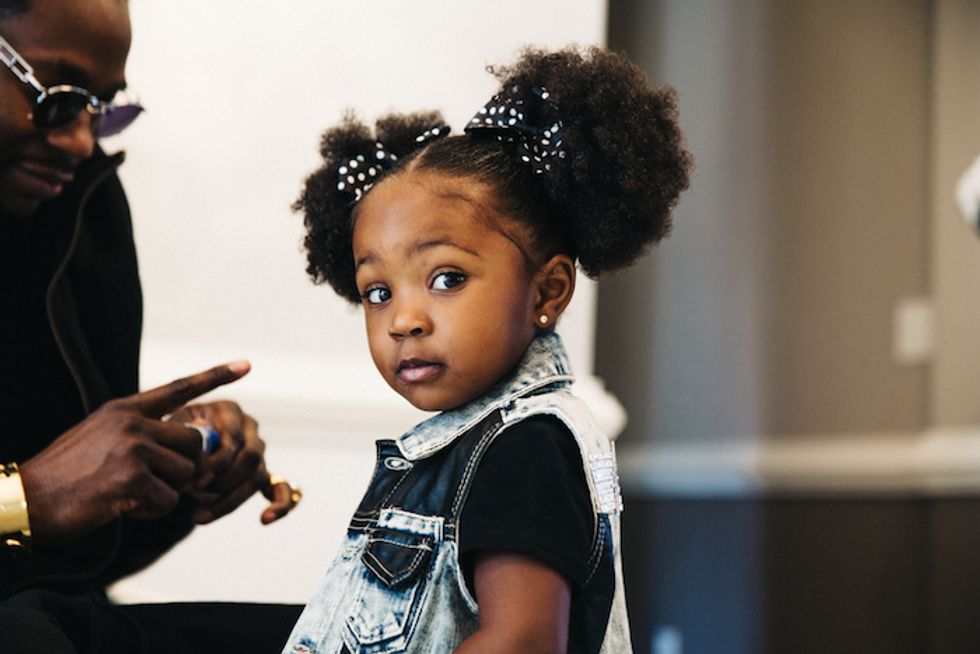 At a glance, it may seem like there isn't a lot of room in the rap world for midlife crises. And yet Tauheed Epps -- the 37-year-old rap superstar better known as 2 Chainz -- has found himself at a political and existential crossroads, one that says as much about America as it does about the man himself.
In the past year, Chainz has re-emerged as an unconventional role model, straying from that previous incarnation whose dying wish was to be buried inside the booty club. His marijuana legalization debate with Nancy Grace this past January resulted in some truly memorable gifs, but it was his poise and common sense that resonated most. "I'm definitely not trying to encourage anyone to do anything they're not susceptible to or old enough to do," he says, speaking over the phone the day after we photographed him with his daughters, Heaven and Harmony, at their home in Palmetto, Georgia. "But this particular thing where it's legal here but not legal 300 yards away, it just doesn't compute."
Having been convicted of cocaine possession before he was old enough to get his license, Chainz has also become an advocate for voting rights, including a stint as a spokesman for the Hip Hop Caucus' "Respect My Vote!" campaign. "The first person I was able to vote for was Obama," he sighs, "so it was like I missed a whole decade, maybe, of being able to vote and share my opinion." On the roots of disenfranchisement, he says, "I think being a felon really doesn't have a color or anything. A lot of the time, it's your environment, your surroundings, your upbringing. And that's what definitely happened in my case. You could say that it's targeted toward the blacks, but I wouldn't say that. I think it's just a minority thing, period."

In addition to working on his third album ("People are used to seeing me smiling, being in an enjoyable state, but this is definitely more serious") and his own recently launched label, The Real University (or, T.R.U.), Chainz has floated the idea of running for mayor of his native College Park. How does he keep all these weighty balls in the air? The answer could be that he keeps both feet rooted in family. Flip through his Instagram feed and you'll more likely find photos of his daughters than stripper-cramped smoke sessions at 30,000 feet. Of course, being a parent at his level of celebrity, and with his reputation -- he's still known on Twitter and Insta as Tity Boi -- has its own challenges. "They are growing up in a society where people obviously know who their dad is and obviously treat them different, and I try and teach them how to judge friends... real friends." (Regarding the semi-legal substance mentioned earlier: "I don't do anything like that in front of my daughters, so they have no idea.")
Heaven and Harmony aren't the only kids Chainz is looking after. "I think this is an important time right here: the youth are definitely looking for someone to look up to, someone that they can get education from besides a teacher. A lot of kids listen to music, they watch sports and they pick their role models through different forums. I just really like what we're all doing, and especially as young black males: getting together and at least having a conversation on trying to change the planet."
By the end of the call, it's clear that Chainz is not so different from any of us who strive for good health, stability, fulfillment. "I'm blessed to have thoughts and go through experiences and be able to tell them, and people receive them and pay for them, or pay attention, so that the benefits I get trickle down to my family," he says. "That's the dream."
You May Also Like
Fashion