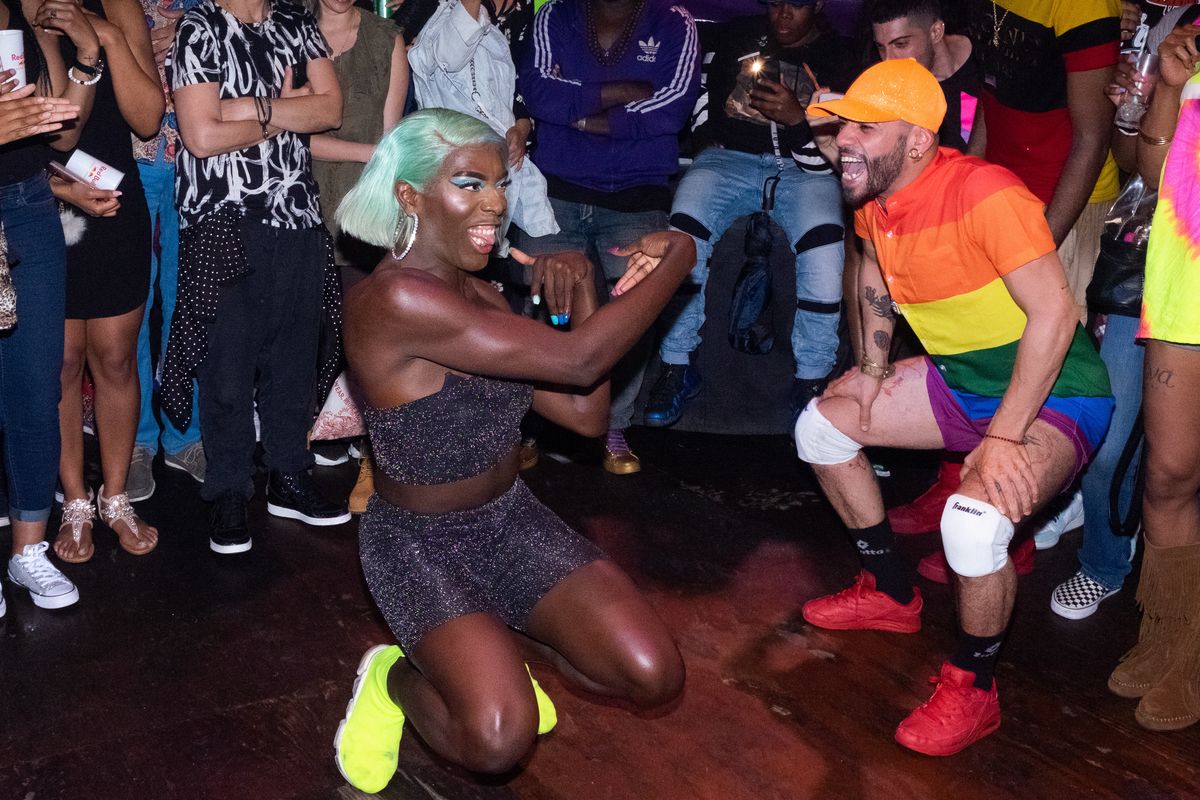 15 Photos from House of Vogue

While the origins of voguing can be traced back to 1920s Harlem, the ballroom scene exploded in the 80s with the mainstream recognition of Madonna's "Vogue" and the release of Jennie Livingston's documentary Paris Is Burning. A stylized and supremely expressive form of performance, dance, and posing, voguing was created and championed by LGBTQ+ people of color, and the balls themselves are meant to be safe spaces for expression and competition. When the vogue community comes together, you have a ball — a competition judged on outfit, performance and personality.

I went along to DJ MikeQ's House of Vogue at Bushwick club House of Yes to check out a modern-day ballroom competition. Starting fashionably late, at 1:30am, one performer, like a flamboyant Moses, parted the sea of revelers to introduce the voguers in attendance. Among them were members of three of the city's most prestigious ballroom houses, House of Xtravaganza, House of Ninja and House of LaBeija, as well as icons such as Twiggy Pucci Garçon (writer of the movie KiKi), and Koppi Mizrahi, a voguer who had landed from Japan mere hours before the all-night competition.

Over the course of the varying rounds of the competition, each category is interpreted by the participants and then judged for unique flair, attitude and outfit. The most unique category was 'Sex Siren with Condoms,' which involved someone dressed in lingerie with an array of condoms tucked into her fishnets while gliding across the dance floor. They were the only competitor and won first place; however, after her electrifying performance it was rightly deserved. Other rounds included Face (with rainbow accessory), Runway (in sunglasses), an MC battle, and the crown jewel of the night, Performance.

This round, voguers were up against one another on the runway, showcasing moves such as duckwalking (dancing in a squatted position), catwalking, spinning and dipping (also known as death dropping). As well as these strenuous dance moves, there is the hazard that I had never considered and some in the crowd didn't expect either: several voguers caught a stray high heel to the eye, a boot to the shin and suffered a couple of twisted ankles. Voguing isn't for the faint-hearted.

Each performance drew enormous amounts of support and praise, but two stood out as the clear showstoppers of the night (well, morning at this point), including the blue-haired, Keiona Mitchell (Marciano Kiki House), whose performance had the crowd screaming with praise and delight. The winner of the night, though, was Monster (House Labeija), whose rainbow playsuit provided the perfect outfit for the death drop that silenced the other 25 competitors.

While the dance moves were impressive, the outfits stunning and the energy electric, what stood out to me most is how a vogue ball is, as it has always been, an absolutely safe space for everyone to be whoever they want to be, express themselves, and at the end of the day live their truth.