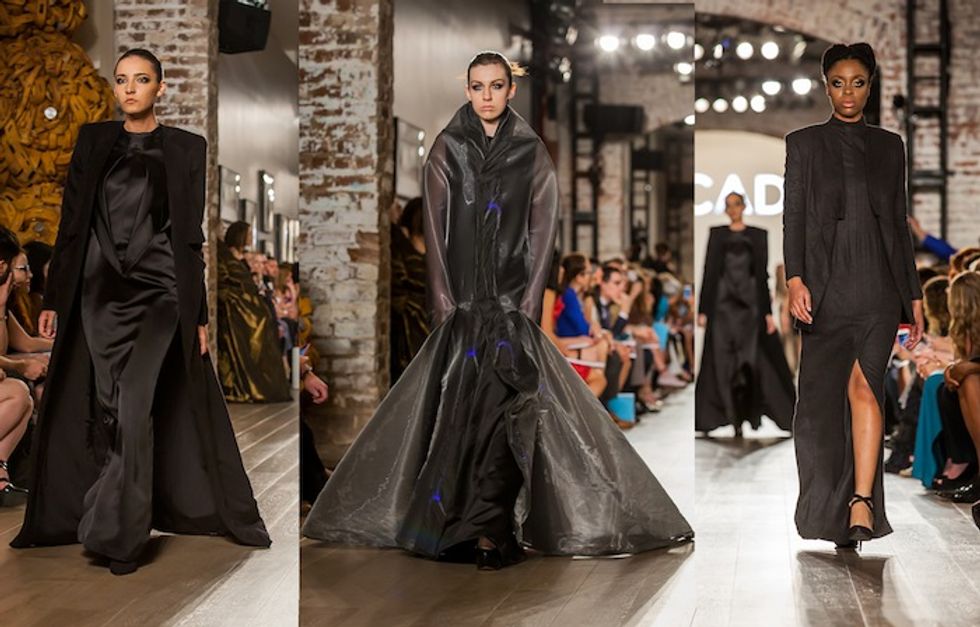 Late spring is always a quiet time for fashion, with the women's fall/winter shows over in March and the men's shows yet to begin. But for the soon-to-be graduates of the fashion programs at major design schools like NYC's own Parsons and Pratt, this lull is marked by flurry of needle-to-tulle activity as seniors scramble to assemble -- then present to a panel of professionals -- the collections that will comprise their theses. Only a small number of these students are then given the opportunity to showcase their work in the schools' storied end-of-year fashion shows, which have counted industry heavyweights like Anna Wintour, Vivienne Westwood, and Marc Jacobs among their past guests.

Needless to say, there's plenty of talent to be found on these runways -- or, rather, backstage of them -- so we've taken on the difficult task of paring it all down to just a few looks. Below, check out work from 15 student designers that left us hoping Barneys would pull another Proenza Schouler and buy all these collections out already.

Goh flouted the conventions of menswear and impressed audience members and judges alike at the Parsons end-of-year show with his abstract floral prints and androgynous forms. Drawing inspiration from his upbringing in post-colonial Singapore, Goh's collection -- which earned him his alma mater's Menswear Designer of the Year award alongside Sungho Kim -- fluidly melds East and West in a reflection of his personal identity.

Unlike Goh, whose vivid looks won him features in outlets like Style.com and The Impression, fellow Parsons grad Sukanjanapong seems in large part to have flown under the media radar -- which is unfortunate, because we adore her minimalist aesthetic. Her designs fall somewhere on the spectrum between Helmut Lang and The Row, but they're somehow softer -- less workplace-chic, more gauzy snow princess with an edge.

Given a clothing market already oversaturated with fast fashion, we thought there'd be little room for any variation on the boho look (because if you couldn't make it to Coachella, at least you can dress like you did) --  but it looks like Krantzberg proved us wrong. With some help from artisans in her native Mexico, the Parsons grad veered in an unexpected direction for her senior collection by combining a neutral color palette in mostly solids with classic festival silhouettes. Boho minimalism, anyone?

McKinney took home top honors at Pratt's end-of-year show for her denim-heavy, vintage workwear-inspired collection, which featured items like loose khakis and a bona fide apron -- artfully draped, of course. With $25,000 in entrepreneurial and design funding her pocket from the Liz Claiborne Award for Concept to Product, we're sure we'll be seeing more of this young designer and her work in the future.

Kit Woo, Pratt Institute
Woo's designs immediately remind us of some of the looks that came off the runway at Seoul Fashion Week this past spring, and we mean that in a very good way. The onetime CFDA Scholarship winner paired tried-and-true design elements Ã  la Alexander Wang (leather draping, neoprene -- Woo calls his particular take on it "suitprene") with streetwear styles (cropped pants over long socks) to neo-goth, "black is a color" effect.

Nothing could be further from the neutral, silhouette-driven looks we've seen so far than Nahigian's bold colors, rich fabrics, and in-your-face designs. We're particularly enamored of the purple-furred cape she sent down the runway -- it's Rihanna-in-Guo Pei before Rihanna ever wore Guo Pei (Pratt held its end-of-year show three days after Rihanna donned the Chinese couturiÃ¨re's dress, but Pratt seniors submit their collections well before that date). On the side, Nahigian is also an incredibly talented artist, because of course she is.

Something about MacDonald's designs just screams "Southern belle with an edge" to us. Is it the lovely draped silks? The vague air of Ming vase chinoiserie? Maybe it's just the fact that the collection debuted at SCAD. Whatever it is, we want more of it -- and with MacDonald set to begin training as an assistant fashion designer at Macy's this fall, we're banking on the slim possibility that some of her aesthetic filters through the hierarchy into the department store's styles.

We're not sure how D'Orlando managed to integrate fully functional fiber optic cables into one of his coats, but we definitely appreciate the ambition. Blue lighting aside, the SCAD grad's vampy, menswear-inspired designs are much more Balmain than Hot Topic and promise to take women's formalwear to a new, shoulder-padded place.

Molly Sayers and Kristen Hughes, Savannah College of Art and Design
From her collaboration with fibers major Hughes, you wouldn't know that Sayers cites Iris van Herpen as one of her fashion influences. Instead, drawing on the time Sayers spent as a child in Qatar, the two took the salwar kameez for a spin, juxtaposing flowing fabric against geometric detailing made from laser-cut wood triangles. The result -- despite the wood -- is one of the most comfortable-looking collections of the season, and one we wouldn't hesitate to throw on for our next Netflix binge.

We know you're all thinking it, so let's get it out of the way first: Yes, that's Hilfiger as in Tommy. And while we can see hints of the designer's signature preppy aesthetic in his middle daughter's work, this collection is a reworking of those all-American classics, not a regurgitation. Elizabeth adds a cool, downtown-girl touch -- geometrically inspired, she says -- to Tommy staples like the varsity jacket for a look that's all her own.

The fashion world has already taken notice of Han: Less than a year out of school, she'll be presenting capsule collections at the upcoming New York and Paris Fashion Weeks. It's an impressive feat, but looking at her Patti Smith-inspired senior thesis -- she juxtaposes wildly different textures and materials while sticking to a single color palette -- we can't say we're at all surprised.

We know our bank accounts would be empty if Khoman's senior collection hit the market, with fast fashion staples like crop tops and chunky mules turned ultra-luxe -- and ultra-expensive -- with lush fur trim. Fortunately for our financial security, the Thai designer's favorite fabric is apparently the much less costly organza.

Pierre Campo, Central Saint Martins
CSM is known for its over-the-top approach to fashion -- design elements at this year's show included space-themed antenna headgear, a wearable ball pit, a poufy poncho that bears an unsettling resemblance to a blanket my Chinese grandmother owns, and... this -- but Campo proved that less can be more by taking home a runner-up award for his pared-down menswear designs that made use of quality fabrics in elegant, not-quite-conventional cuts.

Camilla Holmes, Central Saint Martins
Holmes' might have taken a subtler approach in her designs than most of her fellow CSM grads, but the piÃ¨ce de rÃ©sistance of her collection -- a UK flag emblazoned with the slogan "Respect our existence or expect our resistance" -- captured the sentiment around 1 Granary as students not selected for the official end-of-year show held their own presentation, Salon des RefusÃ©s-style, outside the venue. Even without the political sentiment, the designs hold their own as an across-the-pond take on the streetwear aesthetic so ubiquitous here in the States: London workwear with a haute twist.

Han Kim, Central Saint Martins
The Korean-born designer used his Savile Row experience to great effect in his triple award-winning senior collection: if you can get past the massive 3D-printed structures, the tailoring is attentive and the embroidery incredibly detailed on these colorful, whimsical garments. Keep your eyes peeled -- with a little bit of RTW adaptation, there could be a surprising amount of wearability in these out-there designs.
From Your Site Articles
Fashion