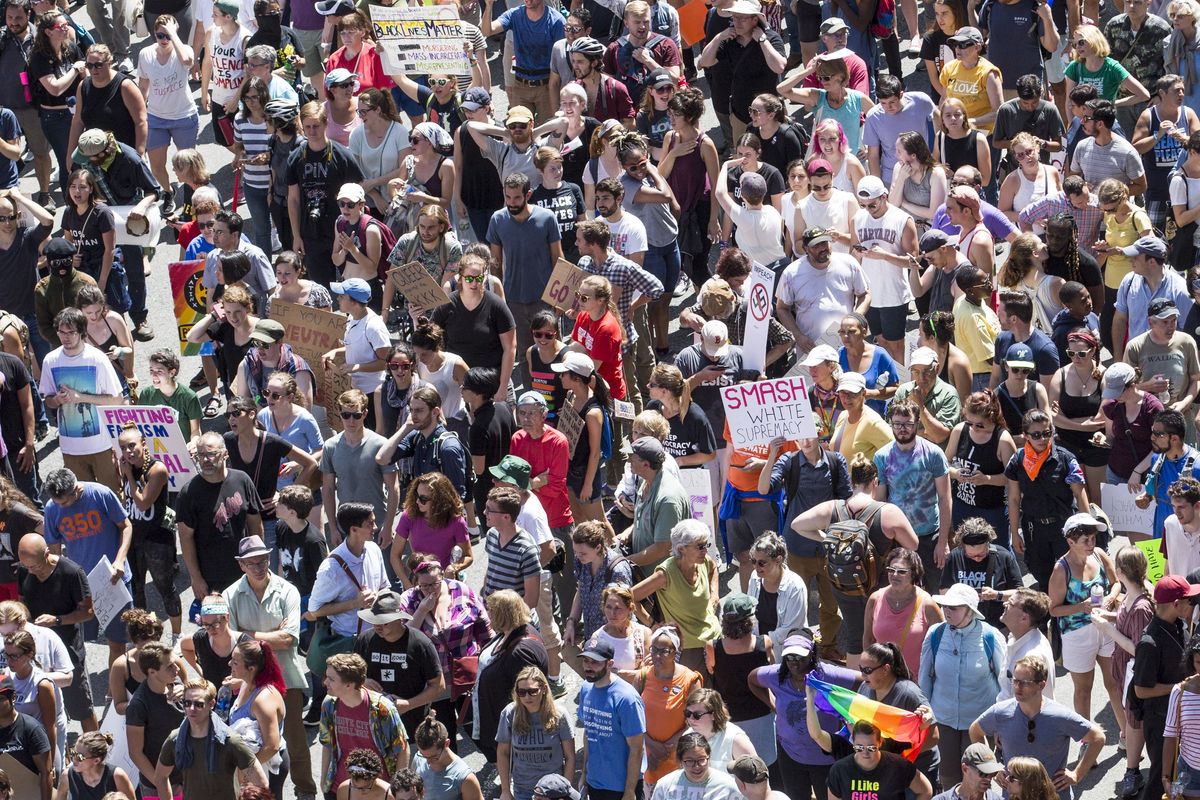 An estimated 15,000 people gathered today in Boston to counter-protest a "free speech" rally that was set to be held in the Boston Common from 12-2p.m. Greatly outnumbered by counter-protestors, the free speech demonstrators reportedly left after about 30 minutes. Around 20 participants were escorted out of the park by Boston police to the cheers of counter-demonstrators.

Heavy police presence on the Boston Common. They are creating a path for free speech protesters to enter the band stand. pic.twitter.com/hrbqjBryoh
— Emily Mesa-Zendt (@emilyzendt) August 19, 2017

In the wake of last weekend's violence in Charlottesville, more than 500 police officers were expected on the scene in Boston.l Police were reportedly closely watching the protests and enforcing a ban on backpacks, sticks and anything else that might be a weapon.

The counter-protestors surrounded a fenced off area permitted for use to the "free speech" demonstrators, emphasizing the difference in size between the two groups. In contrast to Charlottesville, the scene was relatively peaceful, with some verbal altercations and scuffling being the most contentious moments reported so far.

Boston Mayor Marty Walsh initially opposed the rally and asked the organizers to postpone it in the wake of the violence in Charlottesville. "There is no place" in Boston for the hatred seen last weekend, he had said. He eventually conceded that Boston Free Speech had a right to rally, but it seems like very few people ended up joining them anyway.

The group which organized and obtained the permit for the rally, Boston Free Speech, made attempts to distance themselves from the violence of last weekend. The group posted on Facebook that today's event would be non-violent, welcoming to all ideologies and focus on fighting censorship. However, the group also previously said that some Charlottesville organizers would be attending their rally, which would have some "overlap" with last weekend's crowd.

The rally was slated to have speakers from some of the Charlottesville organizers, but they were either uninvited or cancelled, and the Boston Herald reports that some members of the Ku Klux Klan had planned to attend as well. Those initial reports likely contributed to the massive waves of people protesting against the rally. It was reported that at one point the counter-protest stretched along Boston streets for more than two miles:

There are events happening all over the country this weekend and week. Visit www.therisingmajority.com for a helpful interactive map, enter your zip code to find events near you, or text CONFRONT to 90975 to get updates on events to your phone.