by Molly Beauchemin
PAPERMAG
01 July 2014
At the same time as Orange Is The New Black has revolutionized the portrayal of women, same sex couples, and minorities on television, it's also exposed viewers to a New York City that's more diverse than the one portrayed on Sex and the City or Girls. Whether delis in Astoria or bagel shops in Chelsea, there's been a slew of locational references across the five boroughs, giving fans a sense of where the Ladies of Litchfield hung out before they arrived to prison and, in some cases, where they fantasize about going when they get out. Below, we round up 13 real life NYC spots to create an 'Orange Is The New Black tour of New York.' 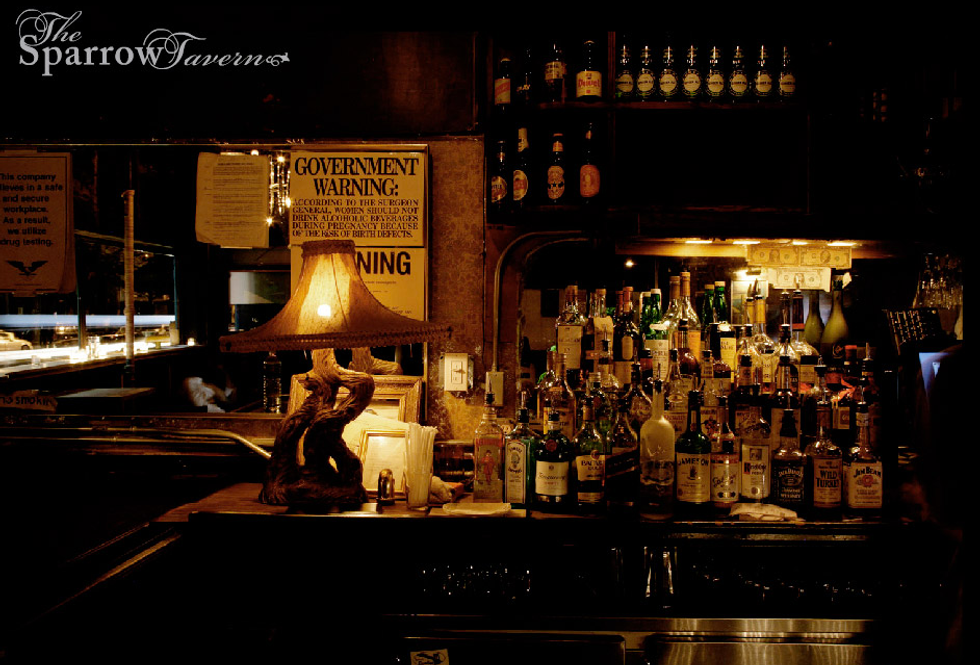 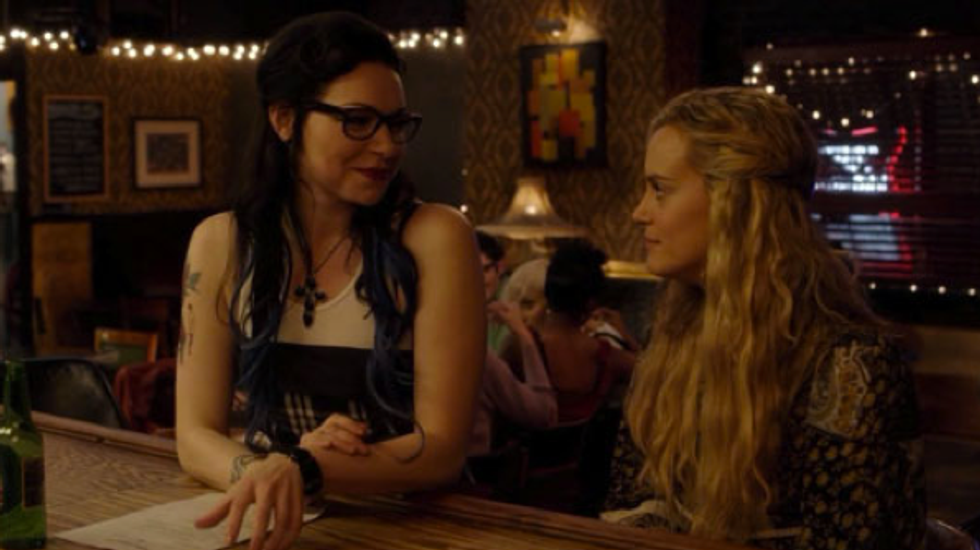 1. The Sparrow Tavern, Astoria, Queens
In Episode 3 of Season 1, we see Piper submit her resumÃ© for a waitressing job at The Sparrow Tavern in Astoria, Queens, a super cute bar with phenomenal cocktails. It's there that she first meets Alex, who gives her shit for fudging her resume and for ordering a margarita when it's cold out. (But that doesn't stop her from picking up the tab.) The Tavern might be known for its comfy decor, elegant mood lighting, and impressive whiskey collection, but Piper was definitely on to something: the Spicy Hot Strawberry Margarita is unbelievable. (As is the Blueberry-Lavender Mojito and the Saffron Sour, FYI.) 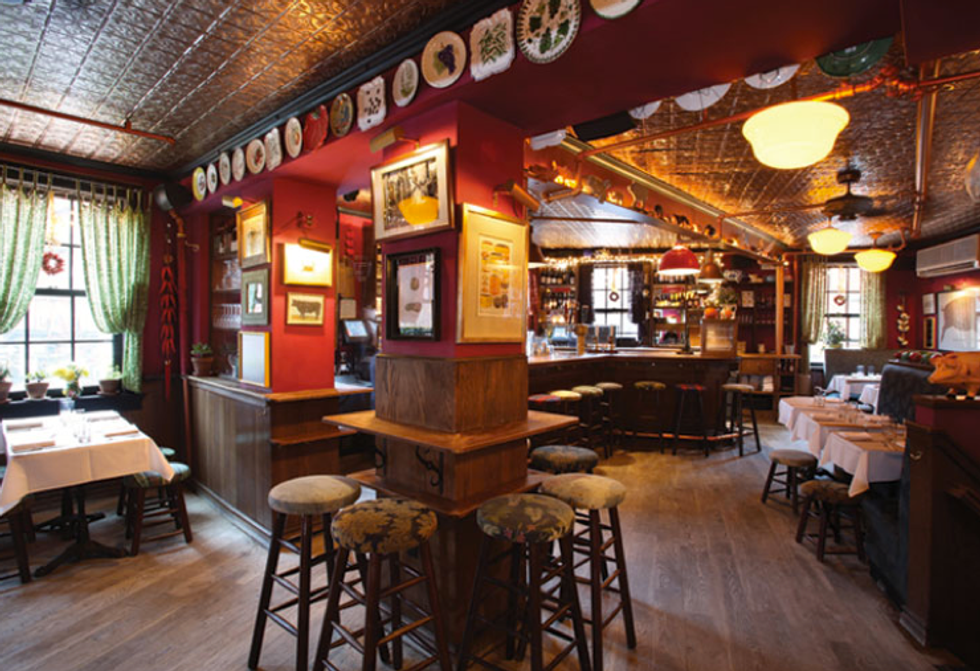 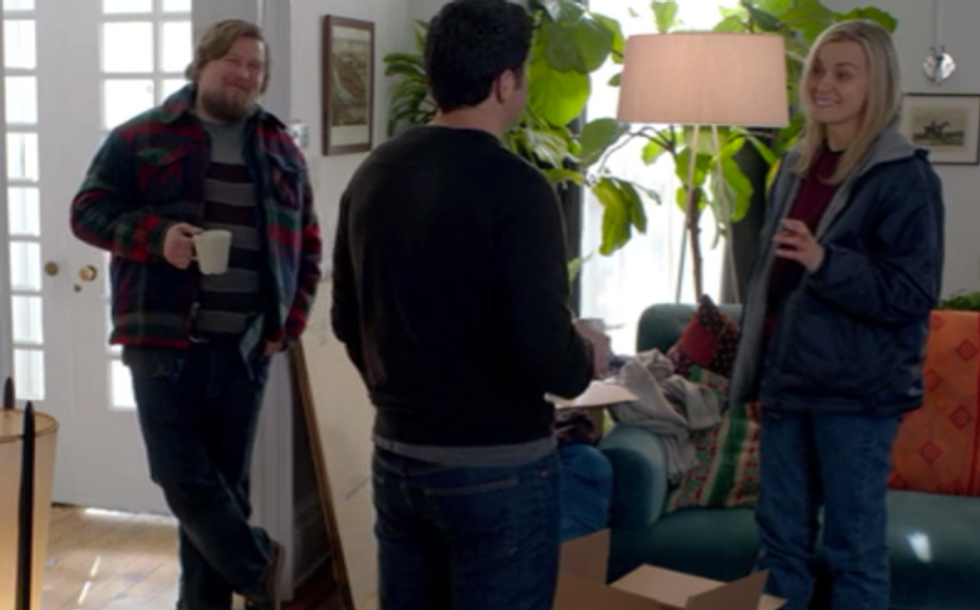 2. The Spotted Pig, West Village, Manhattan
While on furlough for her grandmother's funeral in Season 2 Episode 9, Piper tries to get Larry and Cal to go to The Spotted Pig for "burgers and rye manhattans." April Bloomfield's adored West Village institution makes a mean burger that's often cited as one of the best in the city but the place doesn't take reservations, which means you may find yourself in need of a Plan B like Piper (see below)... 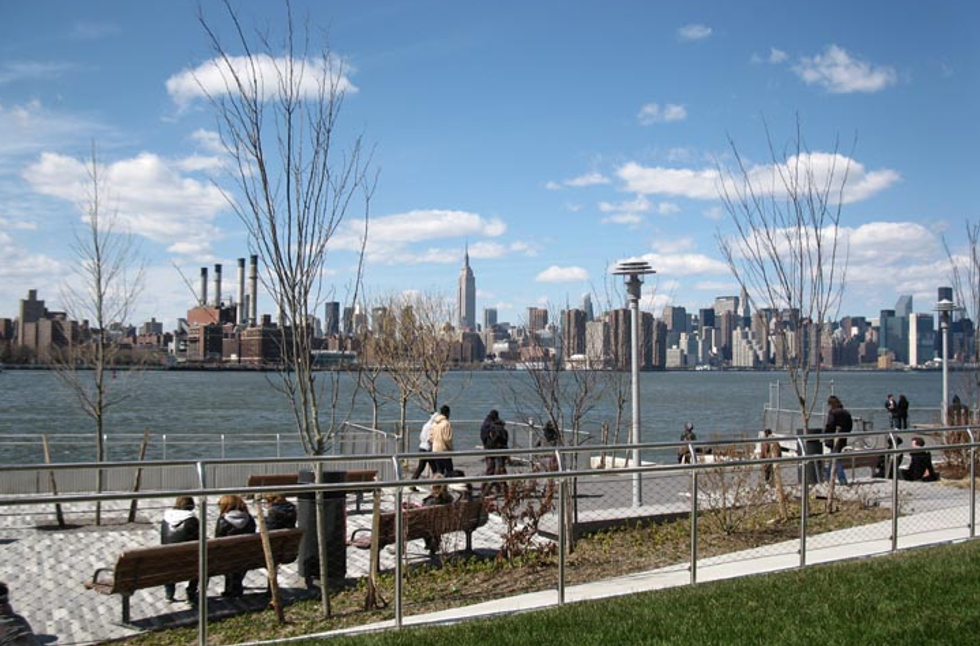 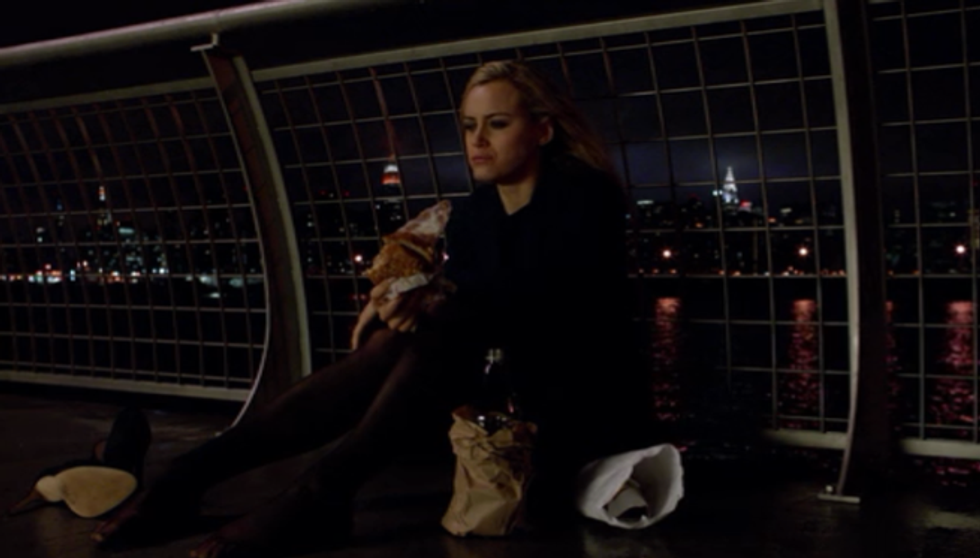 3. The Williamsburg Waterfront at N. 5th Street, Williamsburg, Brooklyn
When Piper's furlough dreams of burgers at The Spotted Pig fail, she settles for a Colt 45 and a fast food burger from "Storkys," a fictitional burger chain where Taystee also once worked, according to the logo on her uniform during a flashback in Season 2. Piper takes her burger and beer to the dock at East River Park on N. 5th and Kent. Even though several things have changed about the 'burg in the last few years, the view of Manhattan from that dock is still one of the best in all of New York City. 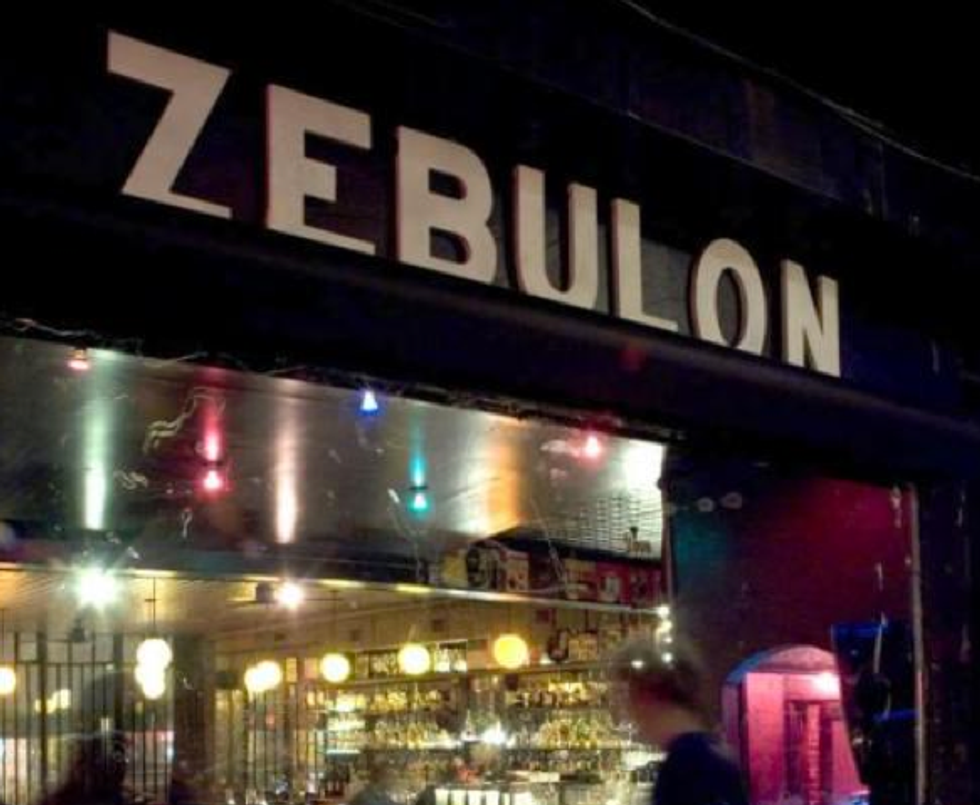 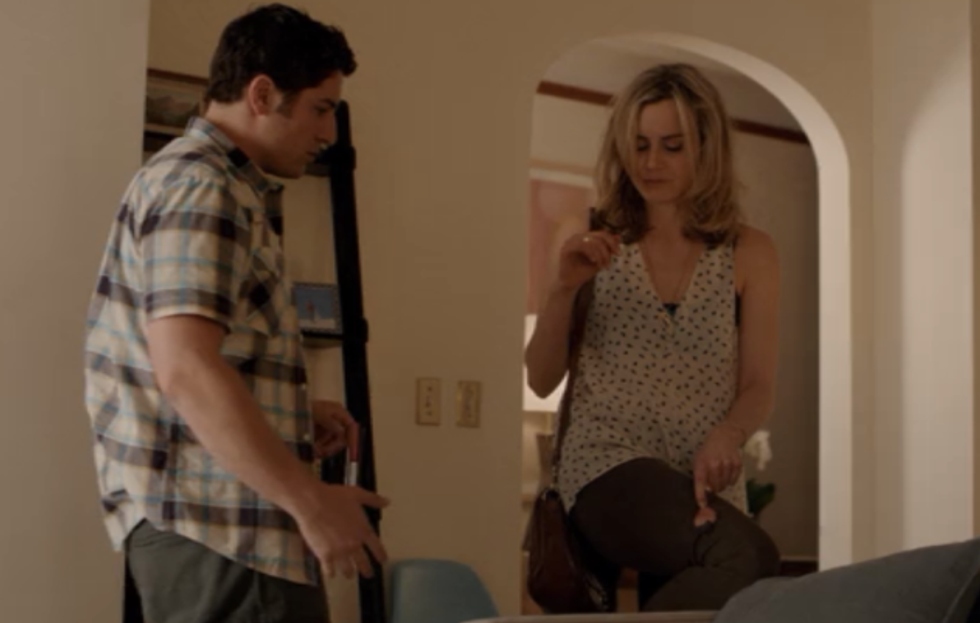 4. Zebulon, Williamsburg, Brooklyn (Closed)
And speaking of Williamsburg, when Piper first meets Larry, she was on her way to a show at Zebulon, a dive-y music venue that OG Williamsburgers will remember closed in 2012. It was a venue that one Yelp reviewer described as a "place [that] always made you feel like you were on the good side of an inside joke" and it was. It had a cool Parisian vibe without the snootiness and there was free live music every night. RIP. 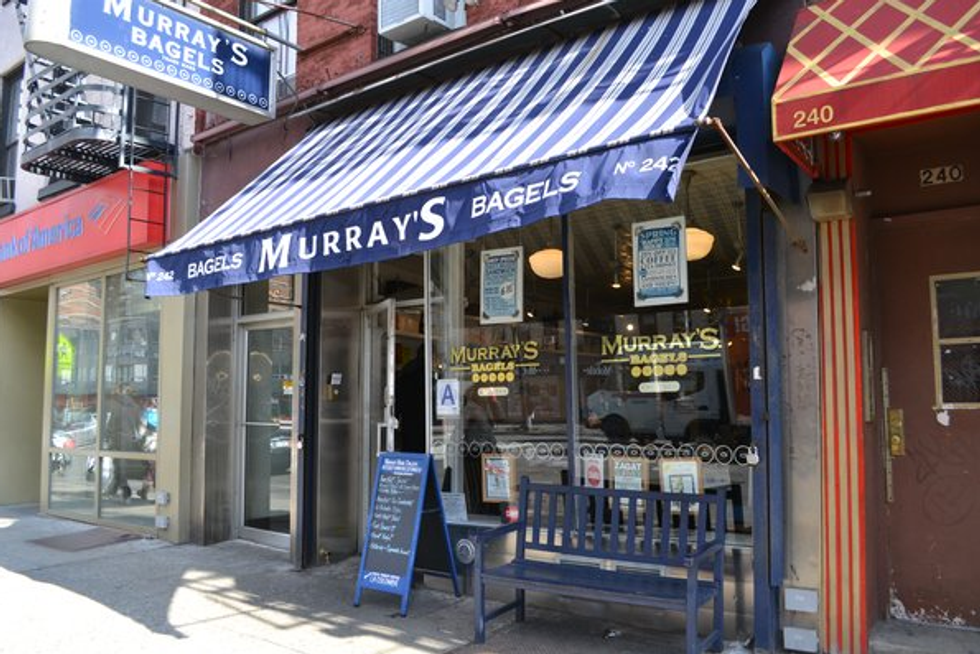 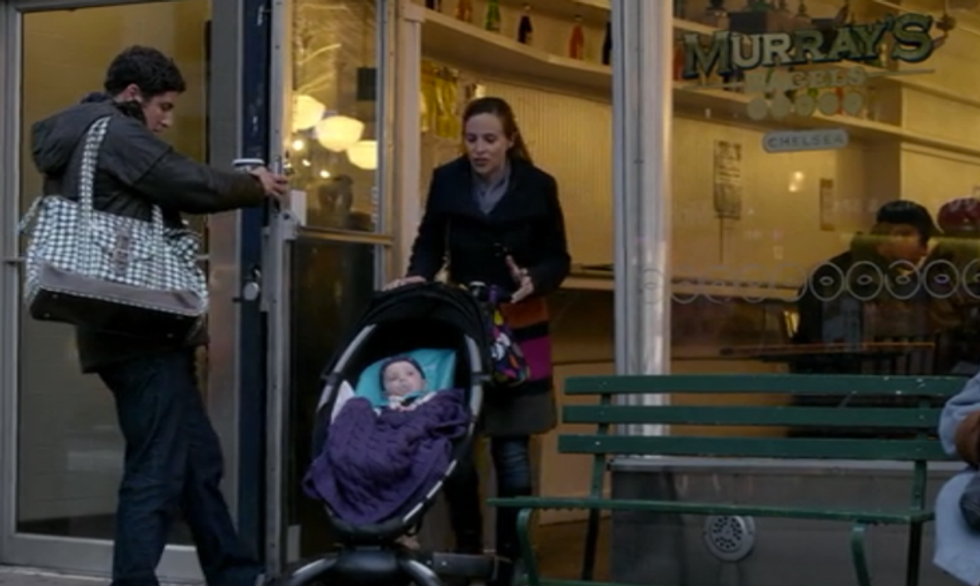 5. Murray's Bagels, Chelsea, Manhattan
Murray's Bagels in Chelsea -- the one with the bench outside on 242 Eighth Avenue --  makes an appearance during Episode 4 of Season 2 when Larry and Polly grab some bagels and schmear, sit outside, and joke to some strangers about how they fell in love at a Star Wars convention. (It's also the first time you start to get the sense that Larry and Polly might actually be falling love, too.) Murray's is one of the last few 'classic' bagel places in NYC, famous for their lox and caper cream cheese (get it on a Sesame Bagel and you'll weep) and their 'no toasting' policy. 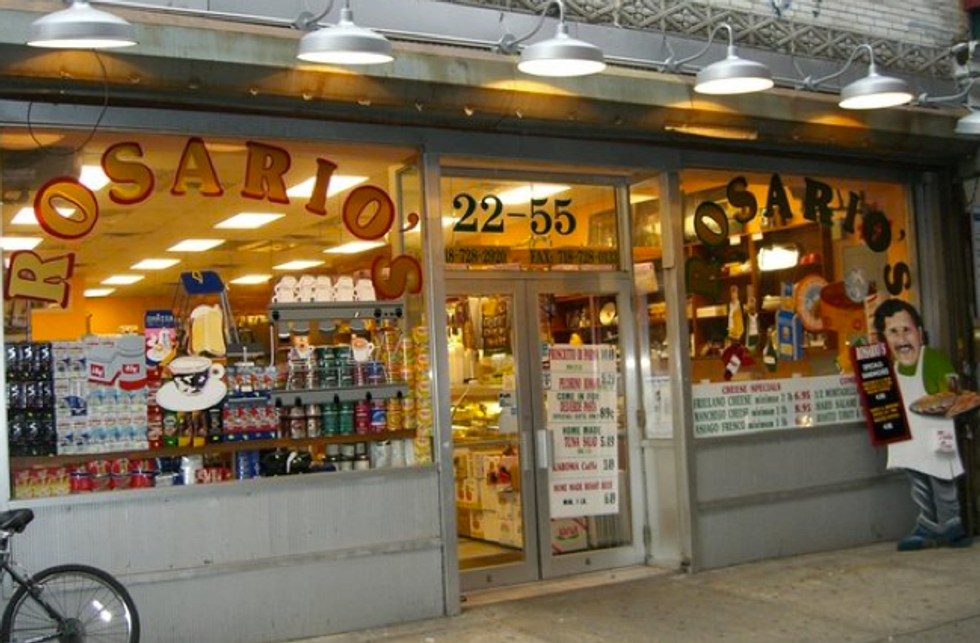 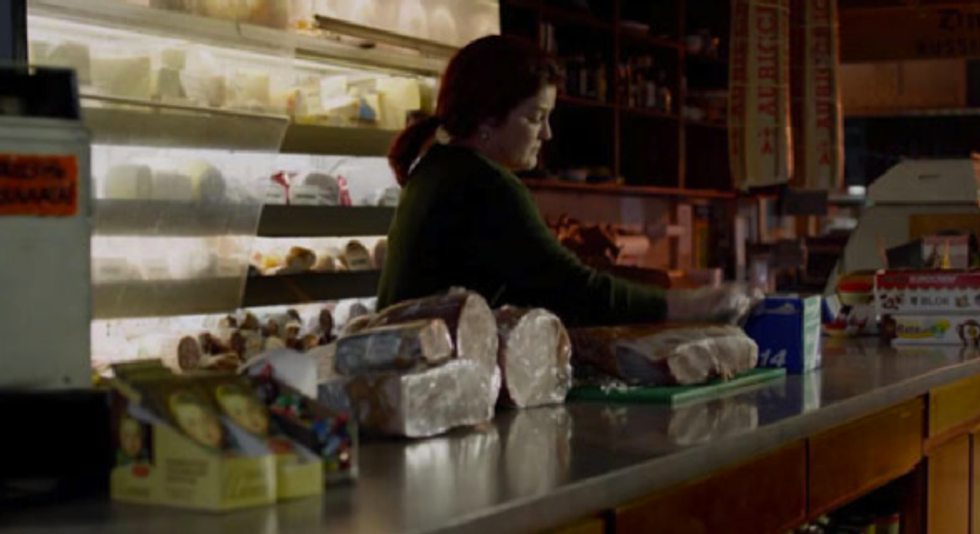 6. Rosario's Deli, Astoria, Queens
Red spends several episodes of Season 1 inside of her family restaurant, Dimitri's, which she later asks Piper to check on when she goes on furlough. In real life, Dimitri's restaurant is actually Rosario's Deli in Astoria, an amazing Italian grocery and deli that makes highly-awarded pizza. Locals refer to it as "the secret pizza," and the mozzarella that goes on the cornmeal crust is made in-house. They also only sell it by the slice, which adds to the appeal.

In Season 2 Red also makes a reference to Russian pastries called piroshkis, which can be found amongst a distinct hub of Russian cuisine on Brighton Beach Avenue. This area is known for its piroshkis -- even the people who sell them in the street under the Q subway line have a small internet following -- but for those looking for old school institutions, they should try Skovorodka Restaurant or Taste of Russia market. 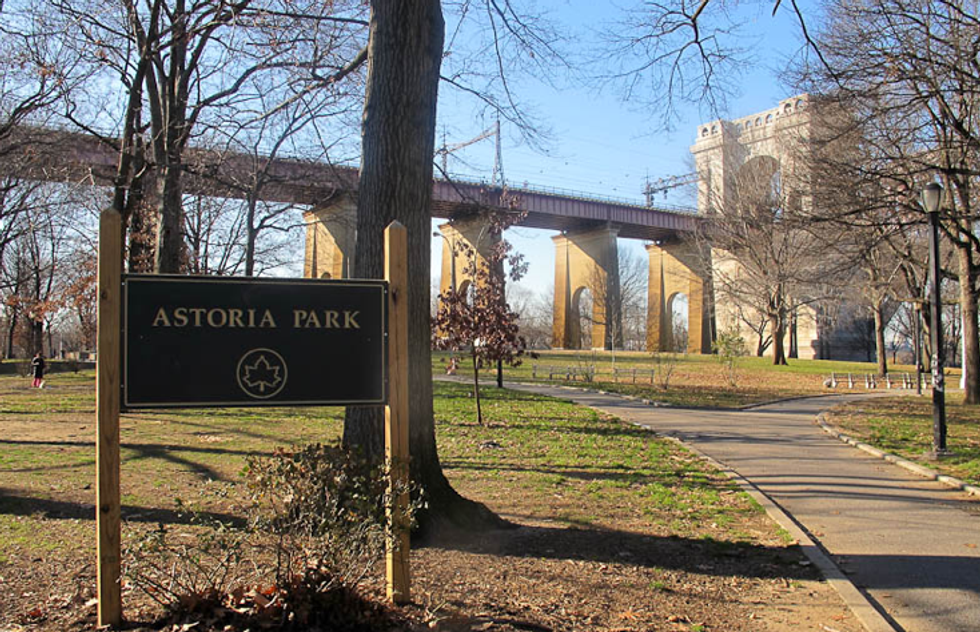 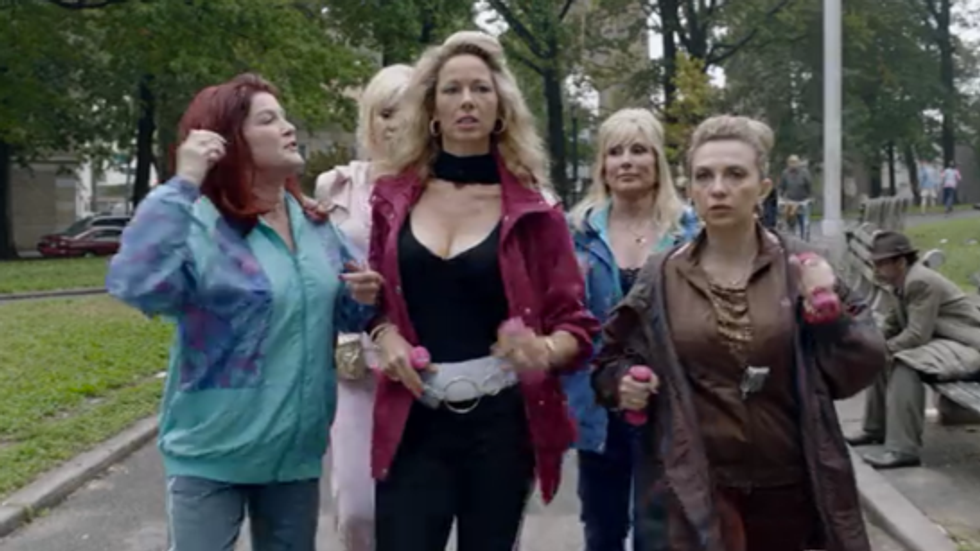 7. Astoria Park, Astoria, Queens
The area where Red walks with the rich Russian wives who ultimately ditch her is near Hell Gate Bridge in Astoria Park, a beautiful and underrated NYC park where she tells the infamous "he's not an eggplant man, he's retarded" joke. 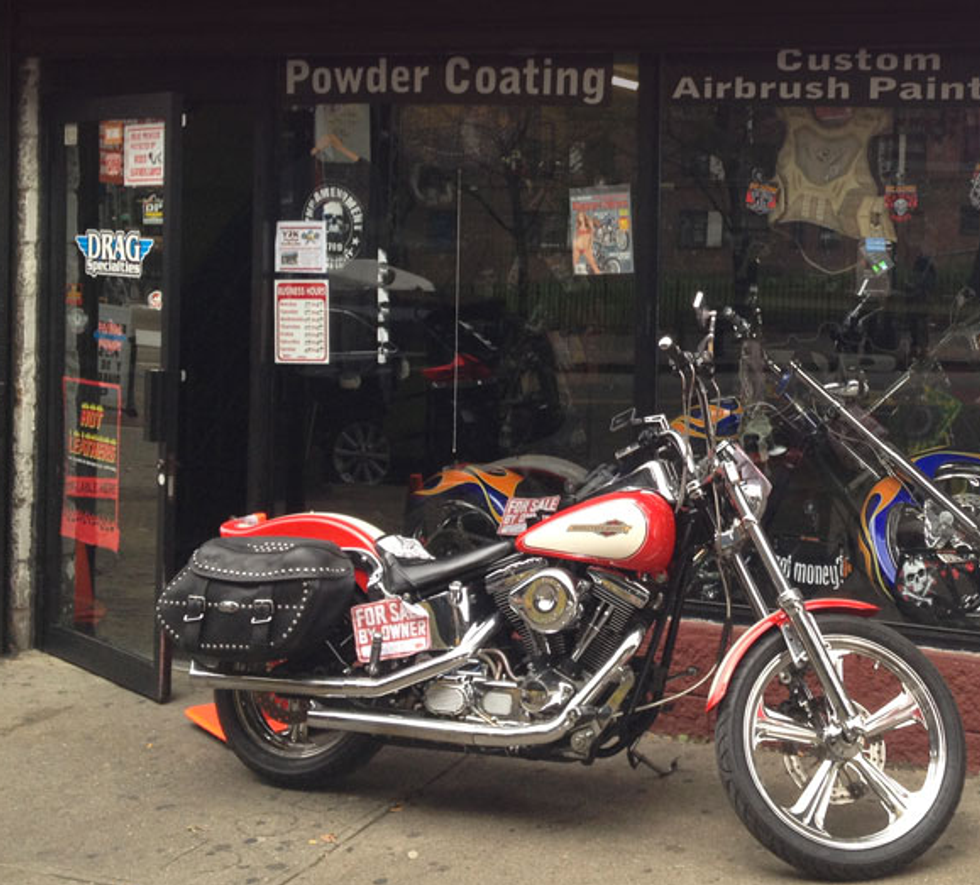 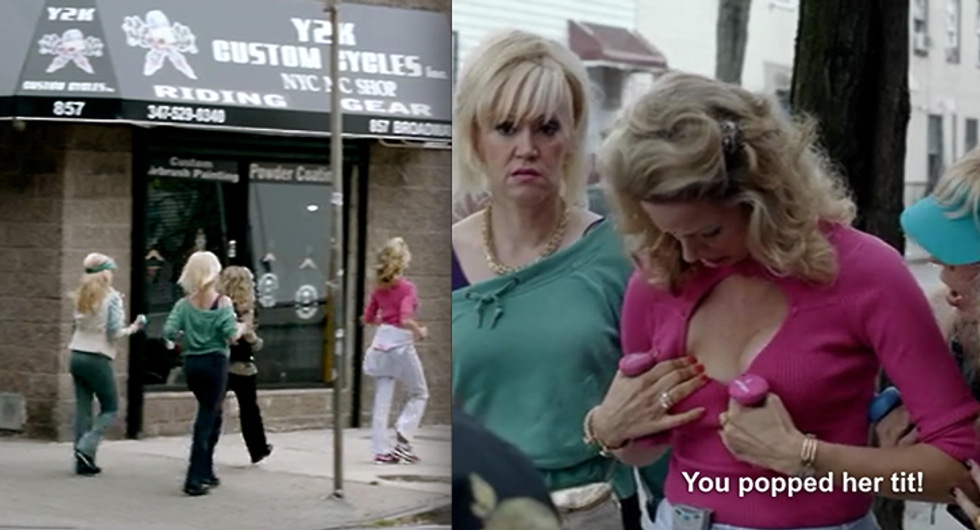 8. Y2K Custom Cycles, Bed Stuy, Brooklyn
The famous "tit punch" between Red and the leader of the pack, on the other hand, happened outside of Y2K Custom Cycles on the Williamsburg/Bushwick/Bed Stuy border. The Russian ladies must've really been going out of their way to avoid her. 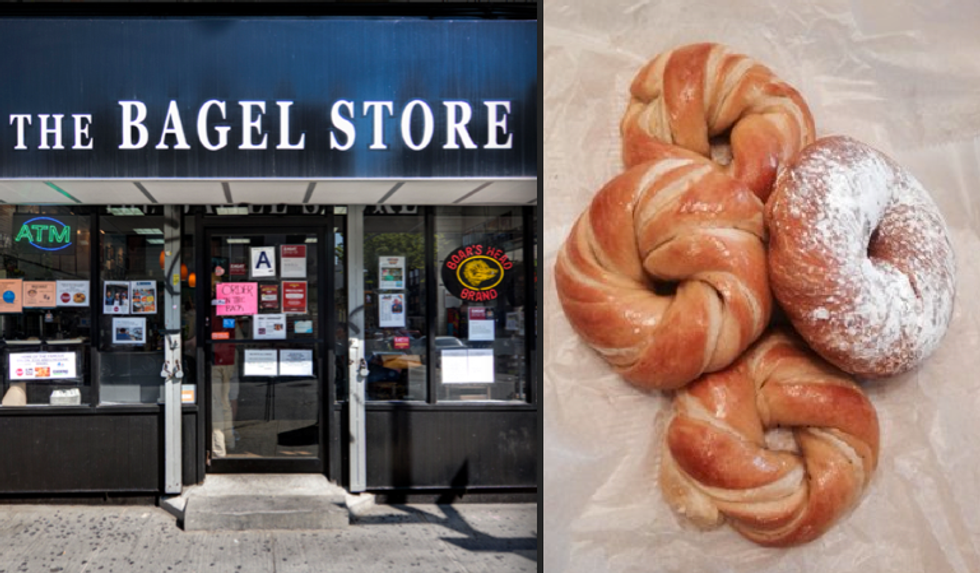 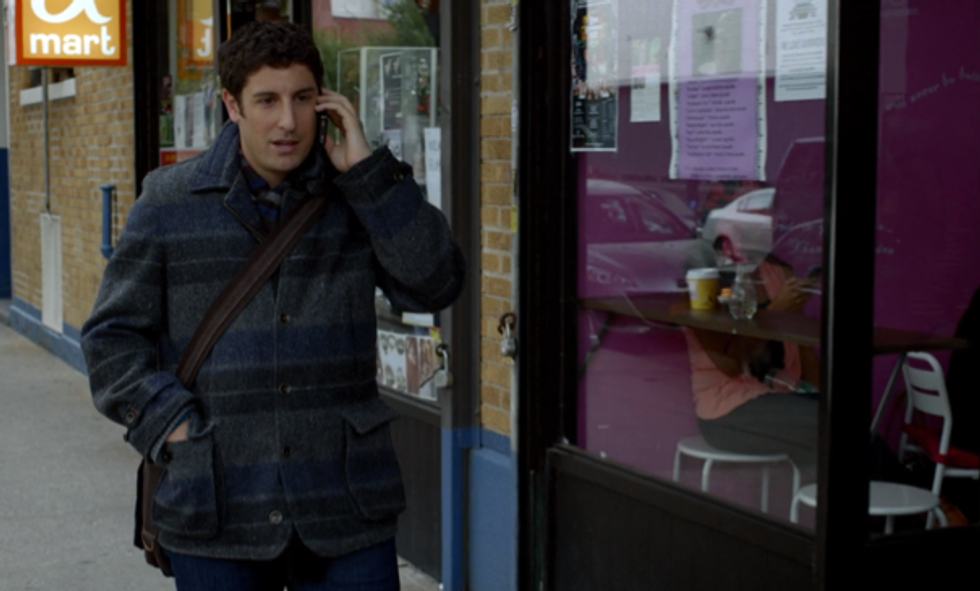 9. The Bagel Store, Williamsburg, Brooklyn
A blatant reference to local NYC food culture comes when Larry offhandedly tells Piper that he and Polly finally got a "Bagnut" -- a "bagel crossed with a donut" that's an obvious spoof of Dominique Ansel's cronut. While the "bagnut" doesn't exist in real life, the "cragel" does -- and it's been getting steady buzz since The Bagel Store launched the bagel-croissant hybrid this past spring. The cragel comes in plain, chocolate, cinnamon, and bacon flavors; try one out and you'll see why this is actually a decent food reference. 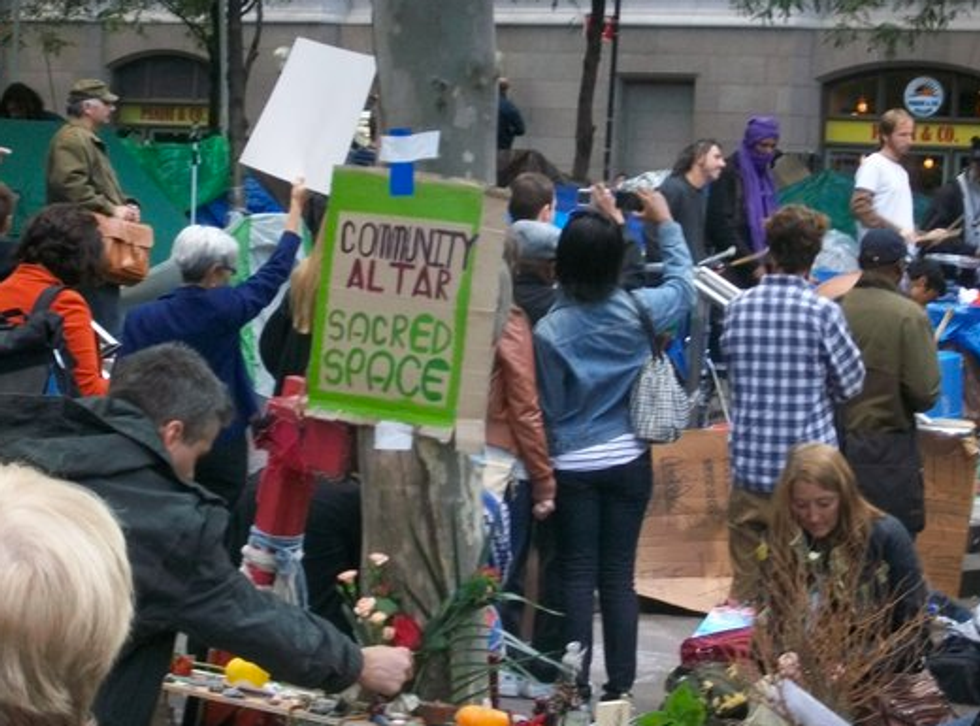 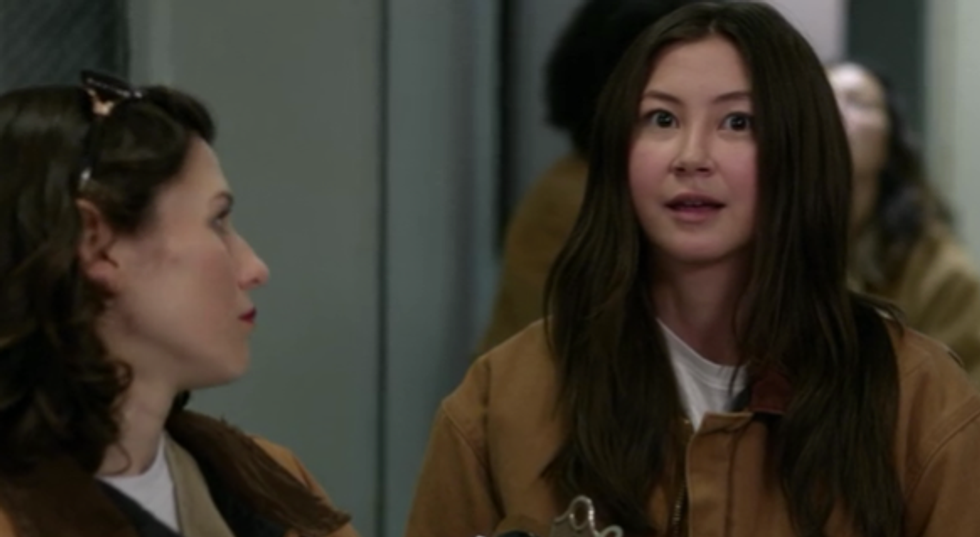 10. Zuccotti Park, Financial District, Manhattan
One of Season 2's new characters, Brooke Soso, was thrown in jail for participating in the now-legendary Occupy Wall Street protests that took place in Zuccotti Park in 2011-2012. It's not clear what specifically Soso did to earn a long-term sentence (rather than, say, temporary incarceration), but the FiDi plaza is where it all went down. 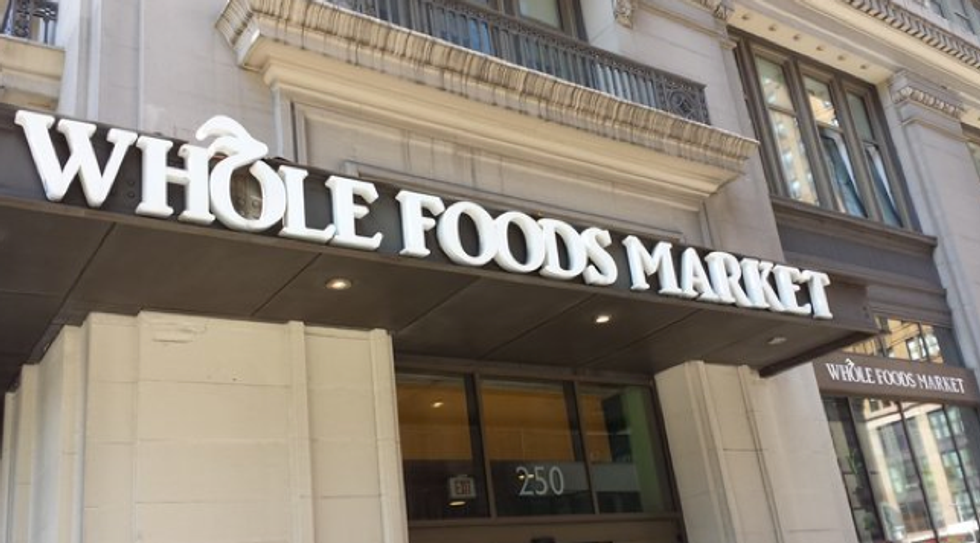 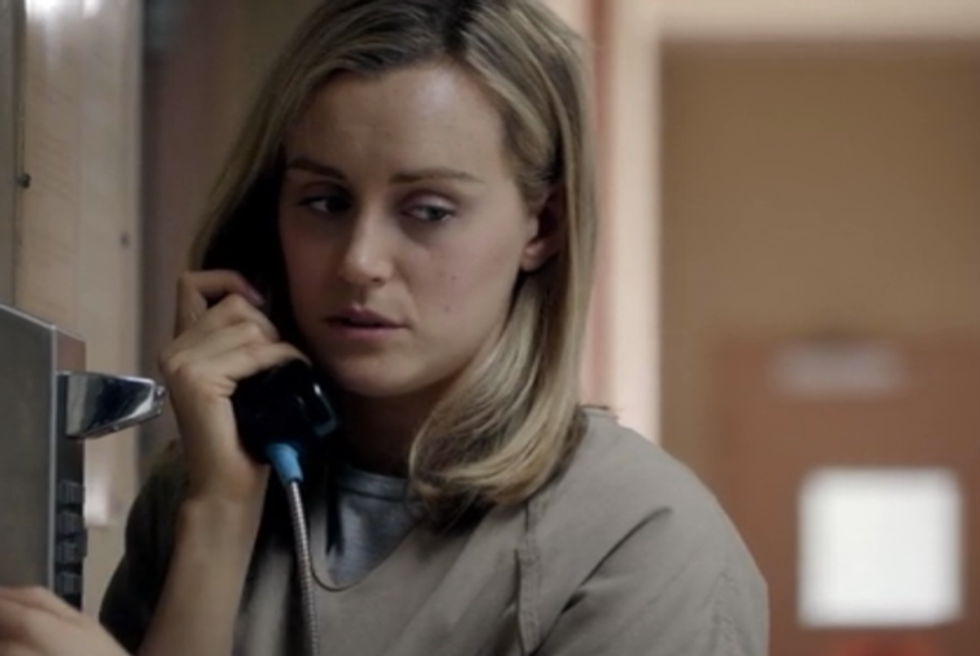 11. Whole Foods, Chelsea, Manhattan
The Whole Foods in Chelsea was already famous for being the grocery store where Katie Holmes and Suri Cruise were often seen shopping but after the first season of Orange Is The New Black, however, it also became a reference point for "crack almonds," the sugar-coated almonds that Larry takes out of a grocery bag while he's on the phone with Piper, causing her to moan, "I can feel them in my mouth." (Yes, they are that good.) 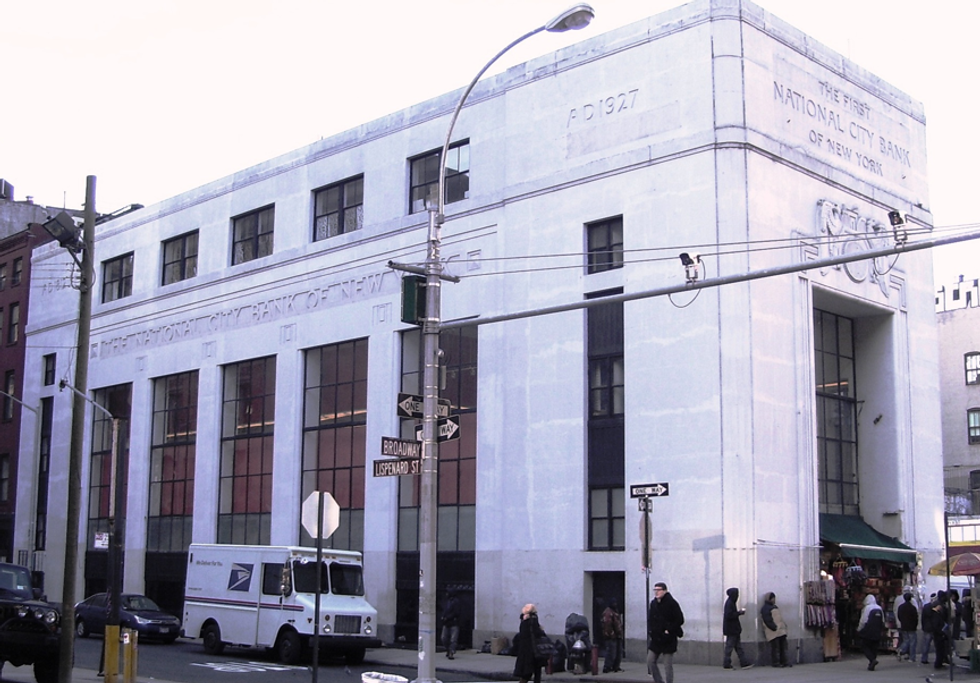 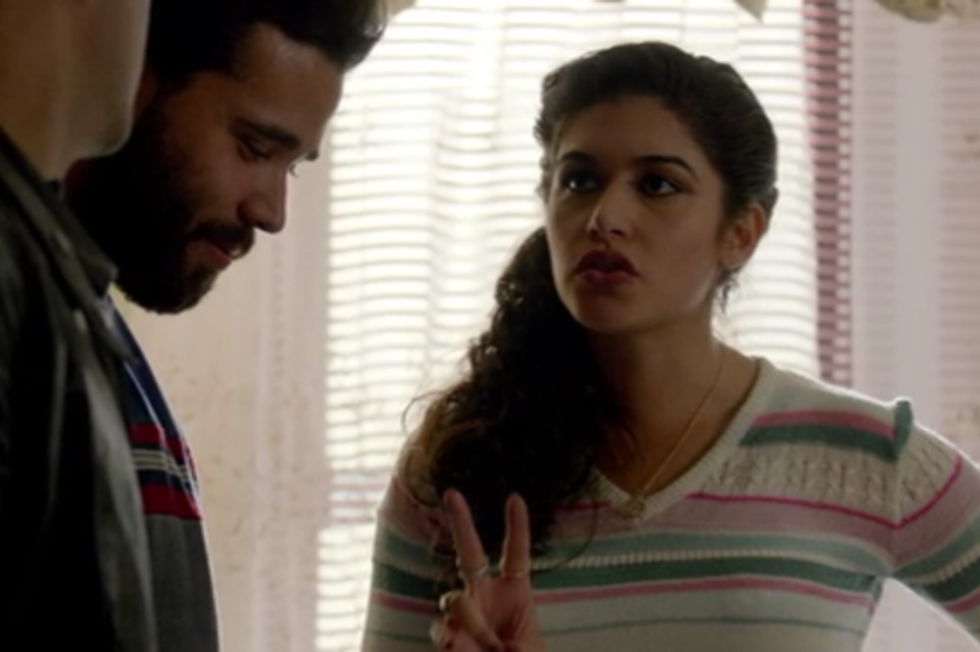 12. The Old First National Bank, Tribeca, Manhattan
The First National City Bank at the corner of Lispenard and Canal Street was built in 1927 in the Modern style by Walker & Gillette -- and it's also one of the many banks that Ms. Rosa robbed decades before we meet her in jail. In Episode 8 of Season 2, young Rosa scoffs about how easy it was to "handle" the "two guards at First National Bank," which is now a historic landmark in TriBeCa. This bank would have been operating decades ago when Rosa's robberies took place, but since then, First National has subsequently been absorbed by Citibank and, like much of the best architecture in New York, is merely a relic. 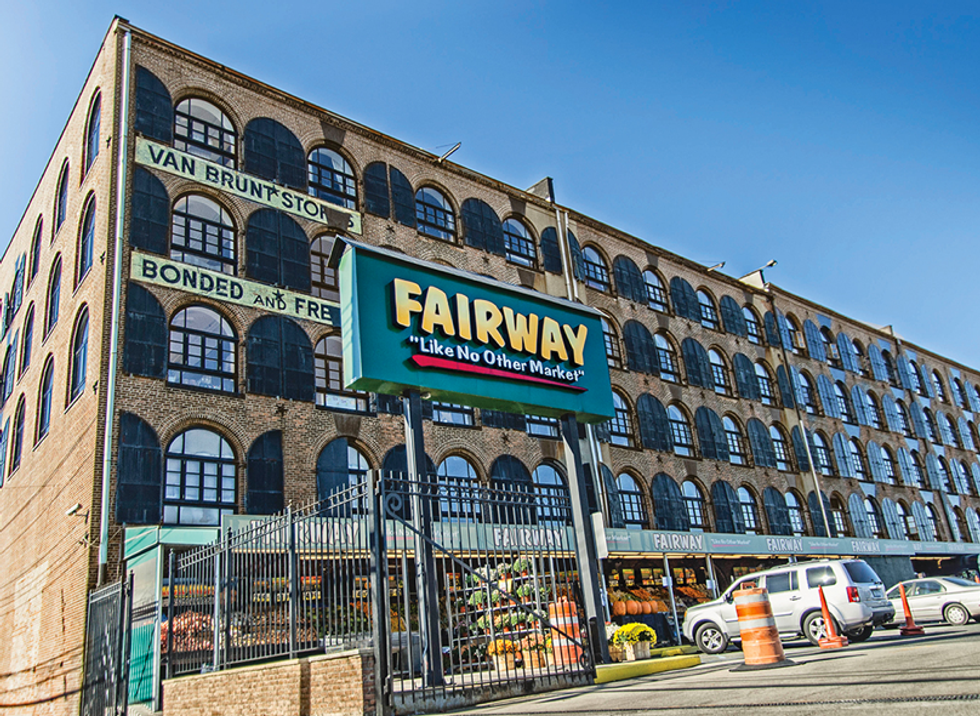 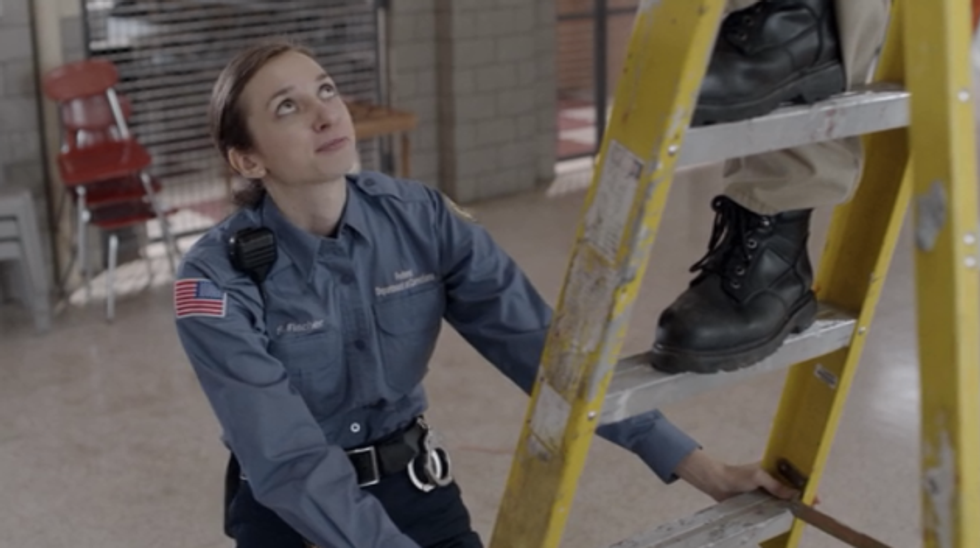 13. Fairway Market, Red Hook, Brooklyn
The Fairway in Red Hook is where Piper would consistently "forget" her reusable bags and make Officer Fisher (who used to work there) re-pack her groceries. (Fisher realizes that she recognizes Piper from "the Fairway in Red Hook" because Piper was "a pain in the ass.") Located inside an old converted warehouse with adorable shutters, rustic trolleys, and an impressive seafood selection, it's exactly the kind of place where you can imagine old-Piper hanging out in-between making her organic soap.