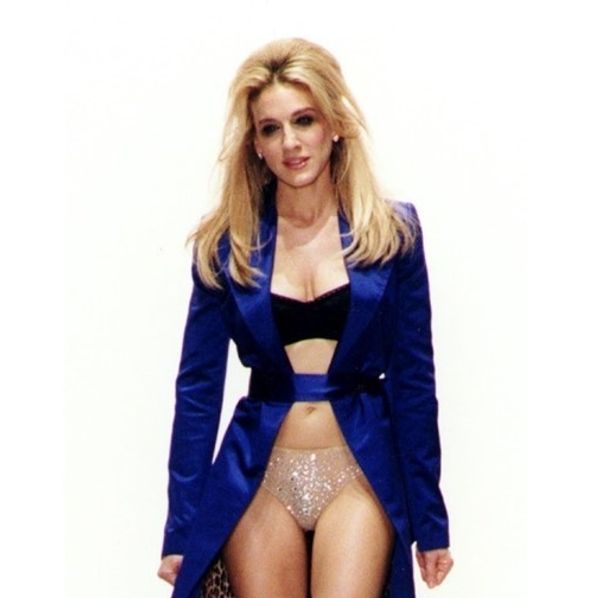 Fashion is, among many things, fantasy. Few mediums memorialize fashion's surreal realms, from its elusive insider culture to its high-concept aesthetics, quite like film and television. So it's fitting then, that, on film, the iconography of a runway show, from models' couture looks to everything-gone-haywire banter and all in between, becomes a rare front-row seat and a VIP backstage pass to all the chaos and glamour fashion at large embodies.

And with that special access, the wildly fantastical seems somehow possible. As designers across the world over-prepare to show their 2019 spring collections during New York Fashion Week, kicking off a full, exciting month of subsequent shows in Paris, London, and Milan, we assembled a gallery of some iconic clips of staged presentations over the years. Relive the magic of those moments, below, from Carrie Bradshaw's infamous runway spill to Zoolander's promotional Paris Fashion Week party-crashing.

Remember when Christina Applegate had to fake a resume to get a fashion industry job to hide from her mother that her evil babysitter died? This cheeky, campy fashion show (featuring a pink nurse with a beret, quill, and stethoscope) was the result of that convoluted mess.

In this clip, fashion reporter Kitty Potter, played by Kim Basinger was on the scene of Paris Fashion Week during 1994's ultrachic satire Pret-A-Porter (aka Ready to Wear) who "did not understand" the proliferation of industry-wide sexism, and sought to expose it to the masses. The film, which featured international models and style mavens such as Sophia Loren, Julia Roberts, and Lauren Bacall, builds up to a runway show in which the models wear nothing.

Sex and the City

A quick Google search will tell you that Sex and the City was one of Hollywood's most stylish and culturally influential shows (and later: movies), but you already know all about Carrie Bradshaw and her exorbitant spending habits, unless you live on literal Mars. Thus, Sarah Jessica Parker's iconic character was often front and center in New York's fashion pulse, including during this moment, where she, playing an amateur who really loves fashion, takes a six-inch stiletto-ed tumble on the runway. While it may hurt that Samantha, Miranda, Charlotte, and company gasp and clutch their pearls — and just ouch in general when Heidi Klum steps over her crumbled body of teased hair and askew limbs — she takes it in stride: a metaphor for a series essentially all about being knocked down nine times and getting up 10.

Hilary Duff's eccentric teenage Lizzie McGuire character, made famous and beloved by the titular Disney Channel original series went to Rome, rode Vespas with hot local boys, and then, met her alter-ego in a bewigged, metallic wearing Italian pop star! But first, a priceless montage of Lizzie awkwardly trying on couture looks. (Set to a Taylor Dayne cover of RuPaul's hit "Supermodel (You Better Work)," natch.) Is there any other way to try them on? You try wearing a bandage dress that literally unravels itself. Cheap, but make it fashion.

What a crazy movie, made even crazier by the climactic fashion show at the center of the movie's twisty plots that never quite resolve themselves. That adorable party house song by Junior Senior, "Move Your Feet" serves as the soundtrack to the insanity. But this all goes to show that if you find yourself making a "comedic" movie about stereotypical white women who love fashion and shopping and boys, throw in a runway — even if poorly executed — and you've got a live representation of everything wrong with everything.

Gossip Girl served as the New York City-based Gen Z fashion romp that picked up where Sex and the City left off, this time starring spoiled Upper East Side private-schooled teens as opposed to spoiled 30-something Manhattan loyalists. We still dream of owning all those floppy pilgrim collars, pearls, plaid prints, and giant bows Leighton Meester's Blair Waldorf character wore through the show's six seasons. But we can settle for the flapper-style designs on display during her mother Eleanor's runway show, and remember that this Deadmau5 cameo as the moment that EDM culture truly peaked.

Did anyone else sit through all seven wildly inconsistent but fanatically popular seasons of Pretty Little Liars? Asking for a friend who may or may have not done so while racking up hundreds of dollars on Seamless. The show's many improbable but nonetheless suspenseful twists and turns offered few moments of ooh-la-la joy, as it was a melodramatic teen soap after all. But we did gasp a little sharply when the Liars walked a benefit fashion show in season two for their dead-not-dead queen bestie, Alison DiLaurentis. I am so sorry, but when I was 16, I was not fucking my hot, brooding English teacher, nor did I have a mysteriously endless collection of perfectly flattering designer gowns, professional makeup application skills, or a weekly blowout budget. But, again: fashion is fantasy, and this is all a dream.

Remember that iconic scene on The Hills in which Lisa Love, then-West Coast Editor of Teen Vogue sat across from a young, sunkissed Lauren Conrad, fixing her steely, red-pen-sharp gaze upon the just-jilted, doe-eyed ingenue and said these unforgettable words: You will always be known as The Girl Who Didn't Go to Paris. A dejected Conrad nodded solemnly in agreement, accepting her fate as a forever sunkissed LA beauty mogul who really loves fashion. LOL, joke's on Lisa Love!

Anyway, moral of the story is: Anne Hathaway's Andy Sachs character made certain that she wouldn't go down in history as That Girl. And so, we present this fashion show montage from the movie, which basically speaks for itself, though we often marvel at New York-based fashion assistants with seemingly no money who are so deeply mistreated by tyranically bosses wind up looking and behaving like this so quickly. There just has to be a nest egg somewhere.

Sacha Baron Cohen, America's current favorite Gonzo journalist, made this movie in 2009 as a way to examine the sheer ridiculousness of fashion. So of course, like his best stunts, he storms a catwalk (in character as fake gay Austrian fashion reporter Brüno Gehard) during actual Milan Fashion Week in a head-to-toe Velcro look, just so it's crystal clear that he hates layering. But, as the film's promotional poster demonstrates, if you hate layering that much, why not go with lederhosen? Brb grabbing my spare pair for improbable winter fashions.

Derek Zoolander, the Ben Stiller character who pretty much redefined "blue steel" male modeling, with chiseled features, piercing gaze, and no shortage of homoerotic posing, was also, like Cohen's Bruno, a total stunt queen. Alongside Owen Wilson's Hansel character, they blew the lid on the (arguably even more) fragile layers of constructed fashion masculinity, to hilarious results in Zoolander (2001) and its long awaited sequel, which arrived 15 years later. As promo for Zoolander 2 ahead of its official release the dynamic duo walked the Valentino runway at Paris Fashion Week, of course, totally in character. It's a life-imitates-art moment if there ever was one.

I mean, truly: What beats this six minute, unprecedented show of unstoppable chicness and glamour? The 2008 Meg Ryan-starring reinvention doesn't even come close.