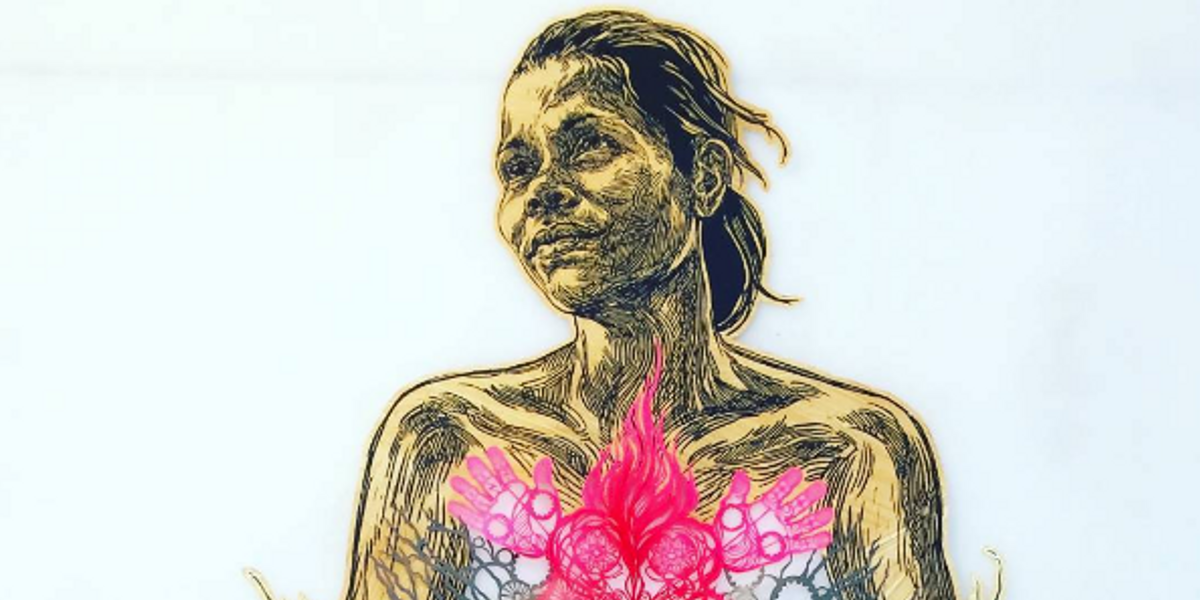 A big, touring Todd Francis retrospective stops at Brooklyn's House of Vans (25 Franklin Street, Brooklyn) on Friday, April 28, 8 to 11 p.m., with over 50 paintings and drawings — plus 100 iconic skateboards. The "Worst of the Worst" exhibition showcases twenty years of the artist's graphics for Antihero. On the night, there's a live performance by LA-based duo Ho99o9 and a DJ set by The Blackouts. And on Saturday, April 29, noon to 4 p.m., Vans is hosting an open-skate session followed by an artist talk with Francis from 4 to 5 p.m. Space is limited. RSVP HERE.

Creative Time and Green-Wood Cemetery (25th Street and 5th Avenue, Sunset Park, Brooklyn) present Sophie Calle's "Here Lie the Secrets of the Visitors of Green-Wood Cemetery, 2017 - 2042" on April 29 and 30, noon to 5 p.m. daily. For the opening, the French conceptual artist will write down or listen to your anonymous "secrets" and insert them into a slot at the base of a tombstone on the cemetery's Bay Grove Hill. After April 30 — and for the next 25 years — visitors can continue to record and contribute their secrets. No selfies or autographs, please.

Mark Mothersbaugh, "1964–Monument to the Conquerors of Space," 2012. Via Grey Art Gallery

"Mark Mothersbaugh: Myopia" opens on April 26 at NYU's Grey Art Gallery (100 Washington Square East) and runs thru July 15. The artist was a founding member of the band DEVO and has produced scores for film, TV and video games. This exhibition, curated by Adam Lerner, features Mark's visual art including paintings, prints, photos, sculpture etc. On Thursday, May 4, 6:30 p.m., at NYU Skirball Center (566 LaGuardia Place) — following an on-stage conversation with PAPER's Carlo McCormick — Mothersbaugh will conduct orchestral renditions of original music on a "six-sided keyboard of his invention" along with local musicians. Tickets are HERE.

Pioneer Works' annual "Village Fete" fundraiser is Sunday, April 30. Fab 5 Freddy is this year's Master of Ceremonies, with cocktails and a silent auction kicking things off at 5 p.m.; dinner (by Union Square Events) and a live auction at 6:30; and an afterparty starting at 9 p.m. with EXO-TECH live and a DJ set by Actual Magic (Chances With Wolves & Javelin). Tickets are HERE.

Skarstedt Gallery (20 East 79th Street) opens a show of new sculpture and paintings by the NYC-based artist George Condo on April 27, 6 to 8 p.m., and up until June 24. The exhibition chronicles the artist's return to his concept of "simulated found objects and includes seven new sculptures and several paintings that "echo and oppose (the sculptures') three-dimensionality."

Gavin Brown kicks off FRIEZE week with a big Joan Jonas exhibition, "What is Found in the Windowless House is True," opening on Sunday, April 30, noon to 4 p.m., at the gallery's new home at 439 West 127th Street. This is the US premiere of two, large-scale, multi-channel video installations; along with drawings, props and ephemera from the artist's 50-year history. On view until June 10.

The week-long PEN World Voices Festival kicks off with a big, free event called "House Divided" on Sunday, April 30, 3 to 4:30 p.m., in the Great Hall at Cooper Union (7 East 7th Street). Over 30 artists, writers, "thinkers and politicos" will respond to current affairs with an alternative "State of the Union." Participants include: John Giorno, Joan Jonas, Jonas Mekas, Ed Sanders and the Fugs, Richard Serra, Phong Bui and Paul Auster. The event was organized by Stefan Bondell and Bob Holman.

Allouche Gallery (82 Gansevoort Street) has an exhibition called "To Accompany Something Invisible" by Brooklyn-based artist Swoon opening on April 27, 6 to 9 p.m. The works include installation boxes, prep sketches and preliminary paper cutouts — and it coincides with the completion of the artist's third house built in Haiti via her non-profit Konbit Shelter.

ensæmble, In-betweens Surface 1, 2015. Via Museum of Arts and Design

The Museum of Arts and Design (2 Columbus Circle) opens a new exhibition called "fashion after Fashion" on Thursday, April 27, and on view until August 6. The show explores the evolution and re-invention of fashion -- rather than its obsolescence -- via commissioned installations by international designers, artists, filmmakers and media including Echhaus Latta, Alexa Karolinski, ensaemble, Lucy Jones, Ryohei Kawanishi, Henrik Vibskov and Helsinki's SSAW Magazine.

The National YoungArts Foundation is hosting a program of performances, exhibitions, readings and screening at various locations in New York City from April 25 to 30. The full schedule is HERE. There's an exhibition of visual arts, photography and design by up-and-coming artists at Sotheby's (1334 York Avenue), opening on Friday, April 28, 8 p.m., but you must rsvp HERE.