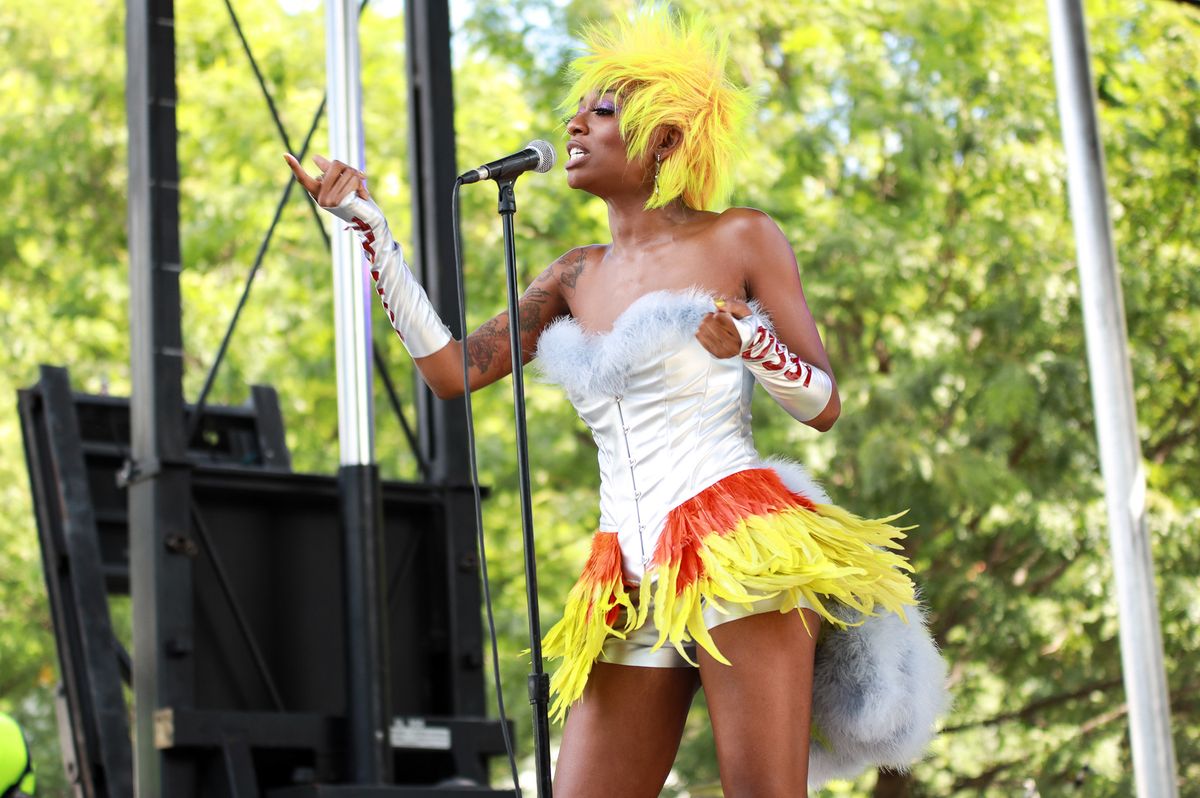 Afropunk began as a celebration of Black punks — those interested in alternative culture and subverting white expectations of what both "punk" and "Black music" look and sound like. It was a space for free expression and love within a community that hardly felt seen.

Since its early days, Afropunk has blossomed into an all-encompassing celebration of Blackness, that shows love to every genre and scene, region and diaspora, and a jumble of legends and newcomers. This year in Brooklyn, its landmark location, was no disappointment. The bill was militantly diverse, all the way from small-font acts, up to the headliners: FKA Twigs, Jill Scott, Santigold, Danny Brown, Kamasi Washington, Lianne La Havas, Leon Bridges, Toro y Moi, NAO and GoldLink.

Related | 21 Artists on The Unique Joy of Performing at Afropunk

While the headliners delivered predictable excellence, across Afropunks two days in the Commodore Barry Park, some of the acts that gathered the loudest crowds, inspired the rowdiest mosh pits, and got the most hands in the air were folks you might have never, or only recently heard of. These were our favorites:

Hip-hop cyberpunks Ho99o9 (pronounced "Horror") live up to their name. The New Jersey group's live show is akin a trip inside a short-circuiting computer, or hell's IT desk. Frontmen TheOGM and Eaddy's throw classic hardcore performance tricks, spitting, thrashing, hurling their bodies around the stage and occasionally diving off it in neon traffic vests. All the while, glitching 90's computer text flashes on-screen, and their cacophony of industrial punk, horror movie synths, former Black Flag-member Brandon Pertzborn's spitfire percussion, and speaking-in-tongues raps, pummel you. However, the band's delicious sense of humor and camp set them apart from their forbearers (fellow Afropunk performers) Death Grips, and made their show one of the best parties at Afropunk. — Jael Goldfine

Alxndr London started making the rounds online after his 2017 "Colors Show" performance of "April," that had Black Twitter captivated with his unique, soul-funk-electronic sound (and the huge hat he wears to every perofrmance.) His set at Afropunk was movingly melancholic, but exuberant and hopeful. — Ninoshkka Paul

"Who is that performing while I'm performing?" asked Tierra Whack during her Afropunk set. Hearing another performer on a far away stage was short lived, as Miss Whack performed back-to-back tracks off her 2018 debut record Whack World. Whack World may not be a real place you can live, but the crowd at Commodore Barry Park were briefly transported to a surreal land of sound and language during Tierra's set. The Philly-based artist, on top of being one of the true original visionaries of our time and queen of sustainability, is something of a trickster. After only two songs, she claimed to have already been "over time," blamed being late, and left the stage. Surely if this were true, the citizens of Whack World, would have rioted. Luckily, Tierra re-emerged with Alicia freaking Keys and peace was restored. After taking us through the colorful world of the rest of her album, complete with some crowd surfing, we all left Whack World peacefully. — Taylor Roberts

Gulf Coast soul/R&B collective The Suffers embodied the Afropunk ethic of love and community on Sunday afternoon. The eight-piece has a loving, vintage family jam feel that revolves around the magnetic vocals and presence of frontwoman Kam Franklin, who peppers their sets with heartfelt sermons on self-love and resilience. Their tunes (even more dynamic live) are a lush, diasporic blend of reggae, Cajun, country, rock and blues — and a perfect pairing with sunshine and good friends. That glorious live chemistry and affirming familial love for each other is a part of why, over the last few years, The Suffers have graced the stage of nearly every late-night show on TV and become a festival staple. — Jael Goldfine

The pop punk quartet babygotbacktalk was made for Afropunk. Members G'Ra Asim (vocalist/bassist), Rhiana Hernandez (violinist), and Jake Lazaroff (lead guitarist/vocalist) are the picture of what pop punk is today. Pop punk's DIY, day-job-needing, still as loud as ever pivot has made the perfect environment for Back Talk to be born, and grow before our very eyes on the stage. Some may forget but punk music has always been the megaphone to the mouth of those discontent with the system at play. BGBT affirms that "music as a response to our bodies being foregrounded in a ways they do not need to be, a chance to bring all-inclusivity back into punk rock." — Taylor Roberts

With oodles of press, a Calvin Klein campaign and a co-signs from Ice-T and Erykah Badu behind her, Chika is becoming one of the hardest MCs in the game. With her cover of Kanye's "Jesus Walks" went viral, she let us know that she was out here for a long time and a good time. Her performance at Afropunk included bops like "High Rises" and "No Squares" — and uplifted the entire audience with stage presence like no other. — Ninoshkka Paul

Marius Listhrop had been lurking around YouTube and the British nu metal/rap scenes for years, before breaking out as Scarlxrd (pronounced Scarlord). As Scarlxrd, he delivers an utterly fresh take on experimental rap that he calls "trap metal," and is equally Nelly, Eminem, Limp Bizkit and anime culture. The way he infuses party-friendly beats with punishing grindcore and screamed nihilistic lyrics, has gained him a cult online and 27 million views on his break through "Heart Attack" (which samples Cameron Diaz from Vanilla Sky Talking about swallowing cum). However, despite his misanthropic persona, Scarlxrd can throw a damn party. His Sunday set at Afropunk had all hands in the air. — Jael Goldfine

If you've watched the independent film Support The Girls starring Regina Hall, then you're aware of Shayna McHale aka rapper Junglepussy's (who co-starred in it) all-around talent as an entertainer and performer. Her acting skills are second only to her flow, which she brought to Afropunk. Her aura of joy and happiness had the entire crowd jumping around to hits like "State of the Union" and "I'm in Love." — Ninoshkka Paul

Related | 50 Photos that Show the Power of Afropunk

Rico Nasty's set was literally impossible to miss. There was not a place in the whole of Commodore Barry Park that couldn't hear the DMV native erupt into some of her most explosive songs like "Rage" and "Smack a Bitch." Those lucky enough to be in the crowd participated in mosh pits the likes of which are only possible at Afropunk, per Rico's demand. At one point Rico personally demanded for a women-only mosh pit, and for a short moment Black women got to express themselves as loudly and freely as they wanted. A rare opportunity, believe me. Rico has quickly barged to the forefront of the trap-metal genre, her and Kenny Beats' 2019 album Anger Management is a widely celebrated auditory attack and has left us all screaming "Kennnnnnny!" — Taylor Roberts

If you've watched HBO's Euphoria, then you've heard cellist and singer-songwriter Kelsey Lu's gorgeous cover of 10cc's "I'm Not In Love." Kelsey is a 28-year-old Los Angeles artist that dropped her debut album Blood this year. Her music transcends the chaos both of a festival, and the world. At her Saturday performance, with her renditions of hits like "Due West" and "Shades of Blue" she had all of us channeling her Taurus energy and reaching for calm and serenity. — Ninoshkka Paul

With their hit "Voodoo" — which infiltrated the hearts and playlists of art students everywhere — hip-hop duo Earthgang established themselves a force to be reckoned with. Since then, they've collaborated with artists like J. Cole, Smino and J.I.D and it's no surprise that their performance at Afropunk was a fiercely good time. Filled with their signature tributes to Tarot and Voodoo culture, their performance was a killer one. — Ninoshkka Paul