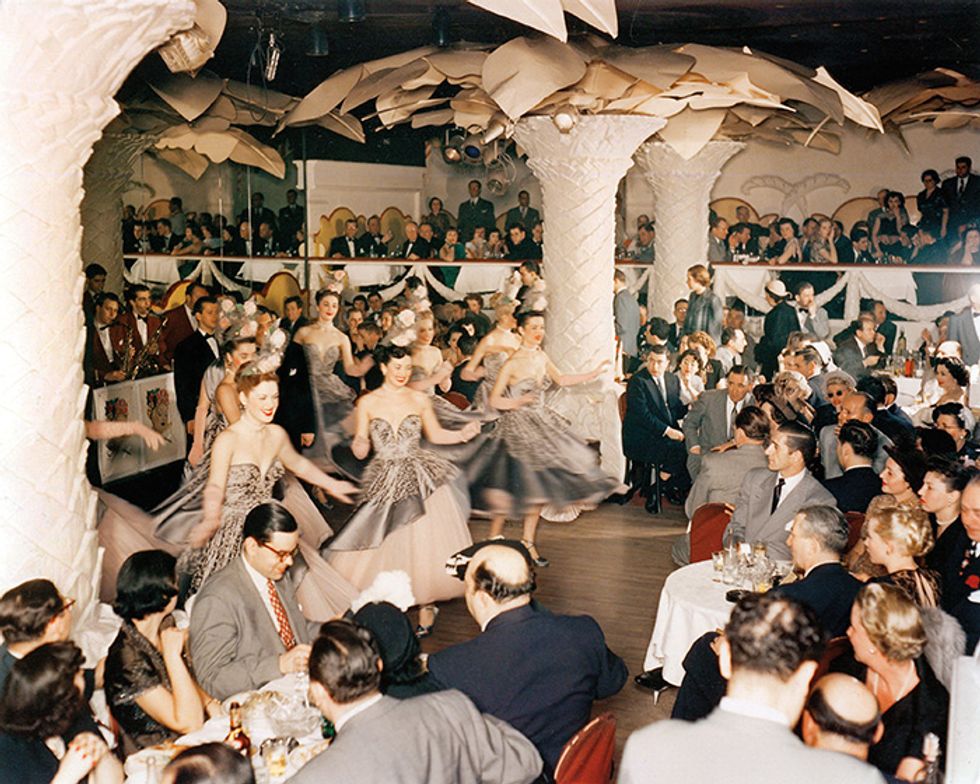 100 Years of New York Nightlife: The Impenetrable Velvet Ropes of the Post-War Era

by Burton Peretti
PAPERMAG
In our October 'Nowstalgia' issue we're taking a look at 100 Years of New York Nightlife, tracing after-hours trends to their beginnings and analyzing the ways our nocturnal habits of the past continue to influence our habits of the present. We've already kicked things off with the Roaring '20s and below we explore the glamorous, exclusive Post-War era. Check back for future decades each day.
The Copacabana circa 1950 / Â© Photofest

Gone were the student dives and gin joints of the 1920s, the transvestite shows and burlesque revues of the 1930s. High-volume clubs, such as the Latin Quarter, the Copacabana, and Billy Rose's Diamond Horseshoe, hosted thousands each night. Billy Rose personally cleared more than a million dollars annually. The big clubs lured the convention and tourist trade, moving vast crowds in and out for dinner, shows, and liquor. (The 1927 Cabaret Law forbade dancing in such "restaurants," though.)

Near-nude female revues, Catskills comics, and dog-and-pony shows brought vaudeville into urban nightlife. After 1945, though, the nostalgic and comical themes of many clubs gave way to the sleek postwar "international" style: aluminum-edged, urban sophistication. Formica, acrylic paint, and polyester reduced the wear on seats and stage curtains. But the booze kept flowing, the smoke still billowed, and the objectification of women persisted.

Greenwich Village clubs retained some of their old college-hangout charm, enriched by vivid musical fare at sites such as Max Gordon's Village Vanguard. Harlem was in eclipse. In the 1920s the Cotton Club and Smalls Paradise catered to rich whites from midtown, presenting cutting-edge black musicians and dancers in stereotypical productions with African "jungle" and Old-South themes. The Depression cut the flow of white patronage to Harlem, and now only the rare downtown hipster patronized Minton's Club or the Apollo Theater. Black performers found work in midtown, in pockets of the Theater District and especially on 52nd or "Swing" Street. The legendary singer Billie Holiday called the street the new slave plantation, but other black jazzers considered the wages and the career prospects promising. The Onyx Club, the Famous Door, and Jimmy Ryan's blew swing music and that new sound, bebop, out into midtown streets.

Racial matters were prominent throughout postwar nightlife. The downtown and midtown CafÃ© Society clubs, founded by the left-wing activist Barney Josephson, advertised and practiced equality in its hiring and its service. Paul Robeson and Leadbelly sang of social justice and downed drinks with Orson Welles and Rita Hayworth. The anticommunist witch hunt, though, helped force the midtown CafÃ© to close in 1947. Red-baiting found its champion in J. Edgar Hoover, in cahoots with his club-owning friend Sherman Billingsley, who ejected "subversives" such as Josephine Baker from his Stork Club.

Ah, the Stork. Postwar, Billingsley's Upper East Side locale symbolized the anti-egalitarian streak in nightlife, the push by Big Money and Celebrity to put the paying masses in their place. This "place" was on 54th Street, outside of the gold chain that barred average people's entry to the Stork Club. Only the chosen rich and famous folk could enter the eight-story building, and only the elite of that crowd breached the threshold of the inner sanctum, the Cub Room.  A rather plain, narrow space -- in contrast to the elegant Main Room, the saloon-like Loners Room or the Blessed Events Room, used for parties -- the Cub squeezed Manhattan's top celebrities, the cream of the movies, radio, and politics, and publishing, into a glorified conversation pit. Famed gossip columnist Walter Winchell, once a tenement dweller and vaudeville hoofer, now schmoozed with Hoover and Billingsley at his own Table 50. In syndicated print and on radio, Winchell related the marriages, pregnancies, infidelities, and divorces of the rich and famous. He became rich and famous himself, creating the inescapable culture of celebrity we live in today.


Women's dressing room at the Latin Quarter circa 1950 / Â© Photofest
Publicity had long been at the heart of New York nightlife. Starting in the 1920s, customers as well as performers strove both to be seen in nightclubs and to have their presence noted in the columns that the young Winchell and other party-crashing scribes pioneered. Publicists were hired by all kinds of club goers; their puffery on behalf of the untalented and the obscure presaged reality TV 80 years later. Like nightlife itself, by the 1940s gossip journalism was less open and democratic. It was now sleeker, more profitable, and more geared for a national audience. Billingsley built a fake Cub Room on the top floor of the Stork Club that served as the set for his network TV show, which featured real club guests. The rationing of fame in the postwar mass media only made celebrities hungrier to keep it and the legion of unknowns more desperate to obtain it. That was the sweaty significance behind the former publicist Ernest Lehman's screenplay for that great 1957 film about nightlife and gossip-mongering, The Sweet Smell of Success.

Other clubs helped to define postwar exclusiveness. 21, with its hidden cellars dating back to Prohibition, maintained 1920s intimacy on 52nd Street. Toots Shor's was a more raucous gathering place for celebrities. The snootiest club was the Stork's main rival, El Morocco, run by a reticent Italian immigrant named John Perona. El Morocco predated the Stork by a few years, opening in 1931, and defined its elite style with a ubiquitous zebra-patterned dÃ©cor. Its small rooms barred all but the most illustrious celebrities, but pointedly also allowed Winchell's leading rivals in gossip journalism. Unlike Billingsley, though, Perona would never market his show on television.

Classic post-WWII nightlife declined partly thanks to new crescendos of real estate speculation. Bulldozers demolished Swing Street to permit skyscraper construction on West 52nd. Mostly, though, the clubs and their snobbish exclusivity became victims of revolutions from below. Cooks, waiters, busboys, and hat-check girls at the high-priced clubs formed unions and struck for better wages and working conditions. Picket lines in front of the Stork Club and El Morocco dramatized this movement and turned public opinion against management. Egalitarian entertainment also made the point. Snobbery was WASP-colored, but Jewish humor -- such as that of Zero Mostel or the improvising Revuers, originating in Greenwich Village clubs of the 1940s -- cut that privilege to ribbons. Folk singers trenchantly catalogued injustices and inequalities. At CafÃ© Society and the Village Vanguard crowds were already singing along in 1947; a decade and a half later, the folk revival had won over an entire generation.

As show-business blacklists lifted in the late 1950s, social criticism was broadcast by entirely new venues in nightlife, such as coffeehouses and hotel cabarets. Village clubs such as the CafÃ© Wha? and The Bitter End introduced Bob Dylan, Phil Ochs, and Peter, Paul, and Mary, and recordings spread their social criticism nationwide. Gay nightclubs emerged slightly from underground, though the years surrounding the famed mass arrest at the Stonewall Inn in 1969 remained precarious ones. Gay aesthetics blended with psychedelic drugs and the anarchy of rock and roll, though, and together they launched an explosive new chapter in New York nightlife. The clubs at first were dirt cheap and borderline illegal, but the performers' fame and the counterculture's stylistic audacity soon increased their exposure and exclusivity. Andy Warhol's various creative acolytes, such as Lou Reed, and beautiful hangers-on such as Edie Sedgwick and Nico, "worked" in The Factory on Union Square and then fanned out to midtown clubs such as The Scene and the Electric Circus for LSD-and rock-fueled happenings. Max's Kansas City and the Fillmore East heralded the new primacy of rock and roll in New York nightlife. And discos, pioneered in places like the Cheetah, put gay promenades, interracial mixing, and sweaty, close dancing back into the Gotham scene.

These new trends completely obscured the postwar glamour scene, which reached the end of its long decline. As early as 1958, the Stork Club, El Morocco, et al. couldn't meet their payrolls, and the increasingly stuffy gossip columns no longer helped to sell papers.  In the next few years almost all of the old paragons of nightlife went out of business.

Decades later, though, the bygone postwar era retains its allure. The conventioneers, celebs, starlets, and busboys of the 1940s and 1950s conspired to produce an oddly hedonistic nightlife district within the American city on a hill. Flush with wartime prosperity, these nightspots offered a vision of affluence, club-like identity, and fame that enticed the world, and that remains today haunting and poisonously attractive. From our vantage point, it seems that decadence then wore an innocent and inviting face. But the misbehavior of the postwar years also planted the seeds of our own desires and excesses.
You May Also Like
Fashion