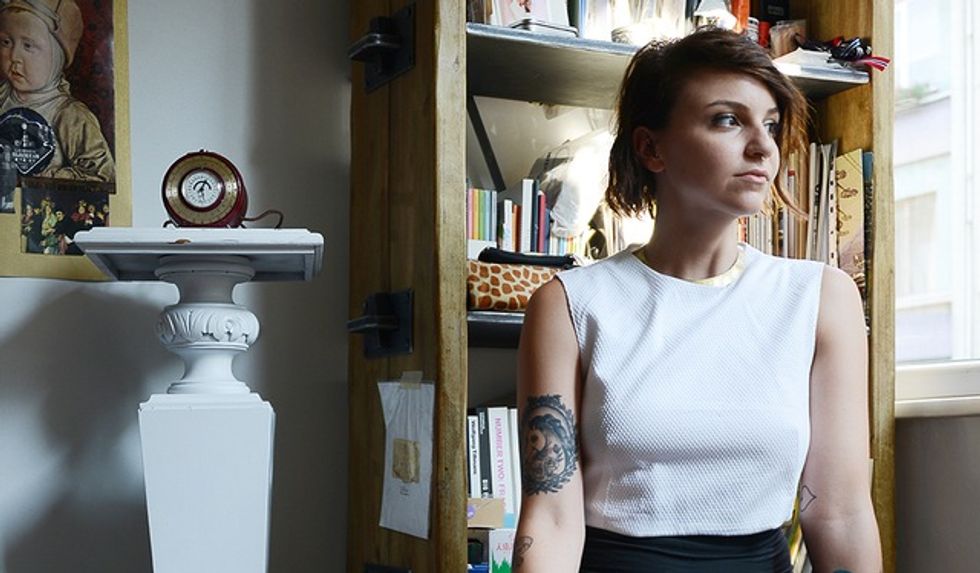 There's more to Istanbul than whirling dervishes, touristy bazaars, and all the recent scaremongering, ISIS-related pieces on the evening news. The cosmopolitan port city is also home to a thriving modern art scene with international reach. Now host to two major art fairs, over 117 galleries, and one of the most anticipated yearly festivals on the globe, the Istanbul Arts + Culture Festival, Istanbul easily rivals Berlin and Paris as a booming creative capital. The combination of cheap rent, proximity to the Middle East and Europe -- Istanbul is just a quick, and popular, boat ride away from Greece -- and liberal attitudes towards the arts have all made the city the perfect breeding ground for connection and collaboration. In Istanbul for the IST. Festival, we were able to meet some of the city's most interesting creatives, from gallerists and curators, to artists, multimedia sculptors and filmmakers, and have culled a list of some of our favorite innovators making Istanbul the next "New York in the 80s."

(Image courtesy of Turbo)
1. Turbo, Graffiti Artist
Considered the biggest and most influential graffiti artist in Istanbul, Turbo has been called the "Father of Turkish Graffiti" (despite his relative youth) as well as the "JR of the East" -- though his style is more colorful and contains distinct nods to traditional Turkish wall art and textiles. The first to bring western style, hip-hop influenced, spray-painted murals to the city, he's known for melding local and historical design aesthetics -- like traditional middle eastern scripts and bold outlines -- with a fun pop-art sensibility. Turbo's work can often be seen on walls and alleys throughout Istanbul, and on clothing by local designers, as well as in ad campaigns with brands like ADIDAS and Coca Cola.

2. Demet MÃ¼ftÃ¼oÄ�lu, Gallerist and Curator
Founder of the Istanbul Arts + Culture Festival, each year scene-maker Demet MÃ¼ftÃ¼oÄ�lu brings notable figures ranging from Courtney Love to Gore Vidal to Istanbul for her ambitious, 3-day event packed with parties, panels, workshops, and cross-disciplinary discussions. In addition to the festival, she also runs a creative design studio, Istanbul74, a contemporary art gallery of the same name (one of the only institutions to bring buzzy photographers like Alex Praguer and Gail Halaban to Istanbul), a film studio (74Studio) and one of Istanbul's glitziest online and print lifestyle magazines, 74Gazette, which features everything from interviews with milliner Stephen Jones to studio visits with local artists. Demet is also married to Alphan Eseli, co-creator of Istanbul74 and one of the city's most respected filmmakers.

(Photo via Twitter)
3. Mehmet Ali Uysal, Fine Artist
One of Turkey's most recognizable artists, Uysal creates large-scale installations that humorously fuse art to the surface of public spaces, transforming the locations into surreal wonderlands and delightfully distorting the viewer's perceptions. In the past, Uysal has used larger-than-life clothespins to make a field look like green, rolling laundry in Skin2, and cut giant slabs of molding out of Gallery Nesrin Esirtgen's walls to create a giant peeling, optical illusion. He's previously had solo exhibitions at the Pearl Lam Gallery in Shanghai, the Stiftungstarke in Berlin, and Pi Artworks, Istanbul, Turkey (among many others), and recently participated in Art Basel Hong Kong. This February Uysal will be opening a solo show in New York at Spar Contemporary.

4. Sevil Sabanci, Collector
Descended from one of the wealthiest families in Turkey, Sabanci is a strong supporter of the arts, and has encouraged her family to collect and support figures ranging from Ai Wei Wei to NYC-based new media creative Tabor Robak. The Sabancis also founded the Sabanci Museum and the Sabanci Modern, two of the most important institutions in Istanbul, and, in many ways, financially helped elevate Istanbul into a contemporary global art capital. When Sevil isn't chairing the board of her family's institutions, she also helps out at the TÃ¼rkan SabancÄ± School for Sight Disabled, which was established by her mother, TÃ¼rkan SabancÄ±, and races horses.

(Photo courtesy of Elipsis)
5. Sinem Yoruk, Gallery Director
Born in London, Sinem Yoruk studied Media Arts and Management Studies at the Royal Holloway University there before returning to Istanbul to help nurture the emerging contemporary art scene. In 2004, she co-founded Atelier Elipsis to help bring museum-quality fine art printing to the region and in 2007 established Elipsis Gallery, the first gallery to focus solely on photography in Turkey. Yoruk has also consulted on various exhibitions and events throughout the country, and is a nominator for the prestigious international Prix Pictet Awards for photography and sustainability.

6. KutluÄ� Ataman, Artist and Filmmaker
KutluÄ� Ataman's thought-provoking multimedia work explores the dynamics between humanity and community, and how personal identity is self-created and rewritten ad infinitum. At the 2004 Carnegie International at the Carnegie Museum of Art in Pittsburgh, Ataman won the top award -- and one of America's highest honors in art -- the Carnegie Prize, and that same year was shortlisted for the Turner Prize, the UK's most prestigious visual arts award, organized by the Tate. His most recent work, THE PORTRAIT OF SAKIP SABANCI, opened in April 2014 at the SakÄ±p SabancÄ± Museum in Istanbul, and is currently on display as part of the official selection curated by Okwui Enwezor for the 56th Venice Biennale, shown alongside the 136 artists selected for this year's exhibition All the World's Futures. Ataman is so beloved in Turkey he is the subject of a full-length documentary film in 2011, KutluÄ� Ataman, directed by Metin Ã�avuÅ�, charting Ataman's art career.

(Photo by Murat TÃ¼remis)
7. Volkan Aslan, Multimedia Artist
At just 28, Aslan has become both an art world leader, bringing a hip, youthful aesthetic to museums and DIY galleries alike. Aslan's art can best be described as "multimedia," and includes a melding of sculpture, light installation, and painting. In the past he has had scores of solo shows, both in Turkey and abroad, and in 2008 formed, with Nancy Atakan and Marcus Graf, "5533," an independent non-profit contemporary art space in the Istanbul Trader's Association shopping center (Ä°MÃ�). With 5533, Aslan helped export Istanbul's art culture to film festivals, conferences and workshops worldwide, and became one of the country's most recognizable art world figures. Volkan Aslan's new exhibition titled The Perfect Day will be on display from September 1 - October 31 at Pi Artworks Istanbul, running parallel to the 14th Istanbul Biennial.

(Photo by Tumay Goktepe)
8. Joana Kohen, Artist, DJ, DIY Space Owner
Artist and founder of the Un-Known Art Initiative, Joana Kohen's deliberately provocative movement known as "scandalism" seeks to combine irony, anarchy and revolution and has caused waves both in Turkey and abroad. Kohen, almost heroic-ly unafraid of potential backlash, first set out to break from the conservative culture from which she was raised, but today has made it her personal mission to alter society's perceptions of women -- especially Muslim women -- via art. Often referred to as "gothic and erotic," her work is an alluring mix of photography, performance art, poetry, and installation and features striking nudes often set against stark and daring color bursts. Often the star of her own works, Kohen brazenly and unapologetically takes aim at a world that would easily overlook her, and has been an inspiration for a generation of new artists using the internet to connect them to a global creative community. Kohen will be taking part in the Contemporary Istanbul art fair this year, and has an exhibition currently in the works that's still under wraps.

(Photo by Benjamin Lozovsky/BFA.com)
9. Mihda Koray, Publisher, Creative Director and Founder of Near East Magazine
At just 32, Koray has an impressively long CV that would put most art-world veterans to shame. After studying in London, Koray made it her personal mission to bring London's interdisciplinary, collaborative culture to Istanbul, and so she nurtures the city's budding art scene through her impressive curatorial talents and vast rolodex. A former gallerist, in 2007 she founded URA!, a venue for performances, video installations, and exhibitions, where she drew legendary artists like Raymond Pettibon and Chris Burden for exhibits and stage shows. She also started a magazine, Near East, a glossy biannual devoted to art, fashion, and free expression that has gained her international attention. Currently, she is working on the Fall/Winter issue of Near East, as well as a show with Martin Creed at the Near East art space in  Dolapdere Istanbul, which she also co-runs.

10. Lara Ogel, Artist, Writer, Curator, Art Space Co-Director
Lara Ã�gel is an artist, a personal and collective archeologist, a writer, a curator, and the assistant director of the Near East art space, named after the arts and culture magazine she runs with Mihda Koray, where she is also Managing Editor. Lara's art works with found objects and materials, and she can often be seen in second-hand stores or thrift shops searching for ephemera for her pieces. She recently created a book of "mistranslations and poetry" in English and Turkish, meant to conjure her own unique, bilingual upbringing. In the past Lara has had work shown at the Galeri Tankut Aykut, Bergesen & Bergsen ALAN and 5533, and has plans to exhibit at this year's ArtInternational Istanbul Contemporary Art Fair, held at the beginning of September in HaliÃ§, in which she will be showcasing her video work, works on paper, and created objects. In addition, she is also showing with Ã�ktem & Aykut Gallery, and participating in a group show in Space Debris, a young gallery in KarakÃ¶y, curated group show by Yulia Topchiy and Tess Thackara.