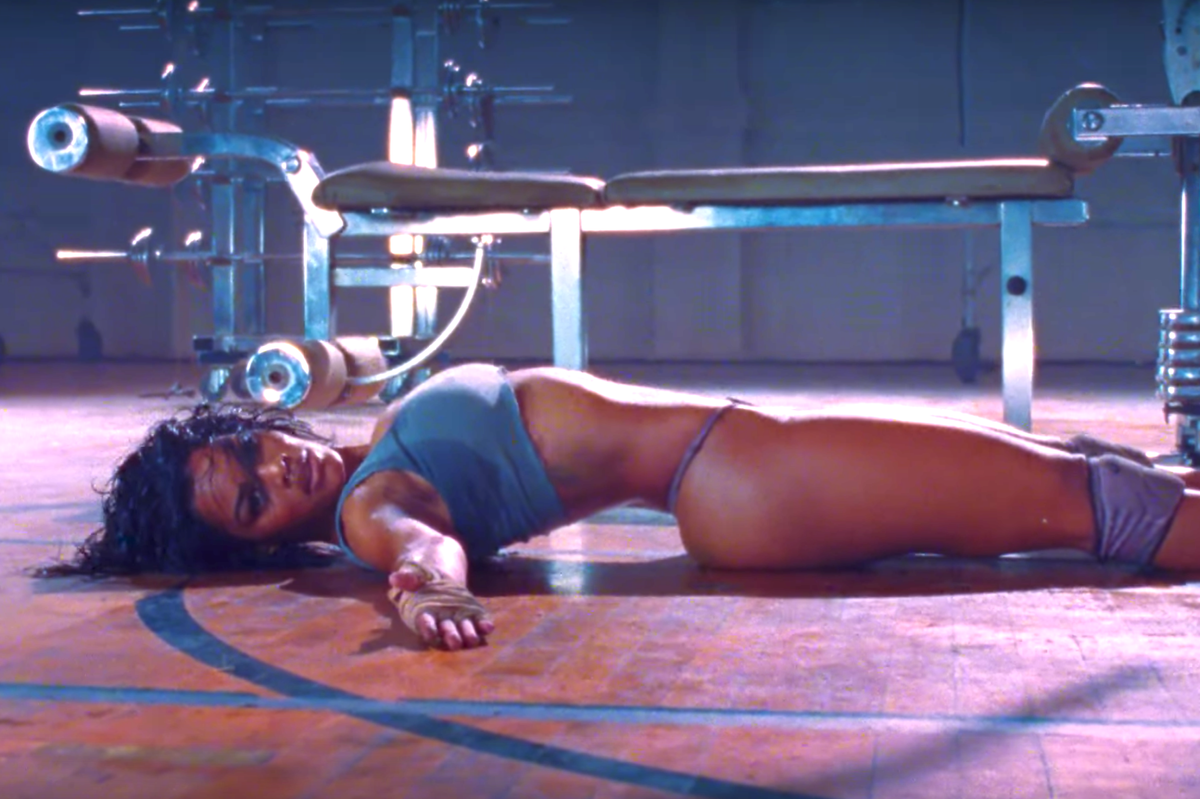 If you thought workout videos peaked in the '80s, you're probably right, but there are some great music videos from the past 20-some years that'll make you want to get your heart-rate up. Here's a list of our favorite workout music videos, for those of us getting a late start on New Year's resolutions (or for those looking for some motivation, or footage of gyrating bodies).

This music video is perfection, from the choreography to the quintessential mid-2000s outfit (check out Cassie's Nokia cell phone). I've updated my resolution from "get in shape" to "get Cassie-kissing-her-reflection level confident."

I was upset to learn that Rihanna doesn't dance in the "Lemon" music video, but Mette Towley's insane moves more than make up for it. In the video, the dancer and frequent Pharrell collaborator shuffles and shakes her glitter-covered body around what looks like an empty mall. It says "Tutorial No. 1," which is a generous assumption of its viewers' dancing abilities.

Pentatonix members Mitch Grassi and Scott Hoying formed Superfruit in 2013. Last year, they dropped their debut studio album along with this lighthearted music video. The duo makes a dramatic entrance to a wrestling ring, only to let their absurdly beefy stunt doubles battle it out while they commentate (via song and dance).

Xtina made the wrestling ring her stage and threw some pretty convincing punches back in 2002. What's really impressive, though, is that she did it all in leather chaps and a micro-mini skirt.

Anyone who tells you pole dancing isn't a valid form of exercise has not been to a pole dancing class, or seen Britney's stomach. Seriously, I'm tired just watching this.

If you're in the market for a slower routine, might I interest you in Dev Hynes' ballet class? In his self-directed video, Hynes dances with ballet star Maria Kochetkova in a graceful back-and-forth, their styles and bodies complementing and countering one another.

"Feeling OK" is about getting on with depression. In what's probably the most relatable workout music video, Best Coast's Bethany Cosentino half-heartedly diets and exercises after falling asleep watching an aerobics tape.

Bonnie McKee is a fierce '80s Workout Barbie in her music video for "Bombastic," in which she shoots lasers that turn everyone into animal print-clad twerk-bots. Everything about it screams bubblegum pop: the brightly-colored set, the shamelessly corny song.

Teyana Taylor's updated Flashdance choreography plus Kanye's iconic line, "Work the middle 'til it hurt a little," and that infectious beat make for a perfect workout jam. If Teyana Taylor's athletic physique doesn't make you want to hit the gym, well, that's okay. But please enjoy the following video.

Diplo's classic, jolting twerkout song will never not be good and deserves your attention regardless of context.