10 Thoughts on One Direction: This Is Us 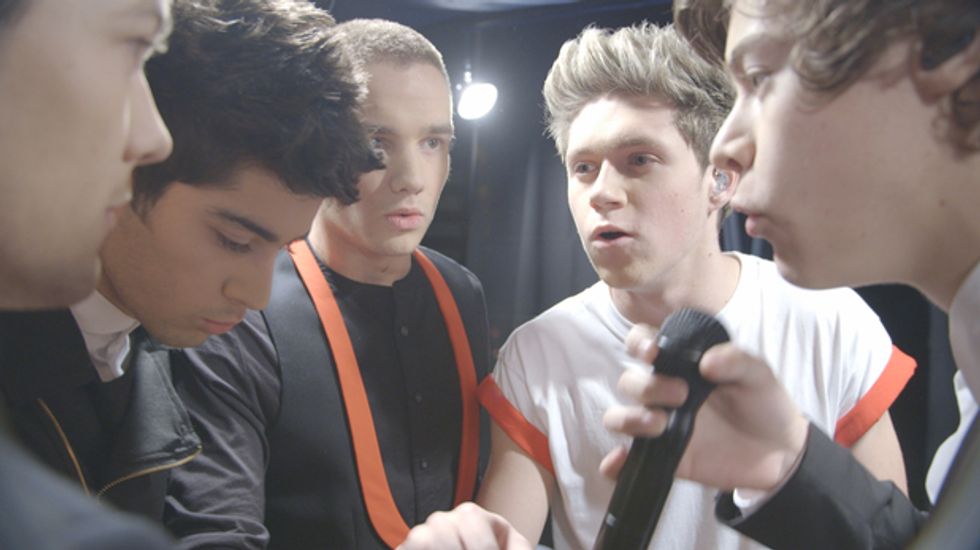 We sent Carey O'Donnell and Eli Yudin, the guys behind the very funny @NotTildaSwinton Twitter parody account (and tireless chroniclers of Real Housewives of New Jersey), to a screening of One Direction: This Is Us in 3D and asked them to share all of their thoughts and emotions after watching the film. Read their reflections, below.

1. From the second we walked into the theater, there was an unsettling feeling that we didn't belong there -- which we didn't, perhaps -- and that everyone knew it, could smell it on us. Maybe it was just the stale beer that I stank of from the night before, but it felt like being fresh blood, walking into a den of vampires. I remember asking Carey before the movie started, "Can we not laugh? I don't want to get hurt."

2. You'll notice early on that they have a few signature moves that they'll perform over and over. For example, one particularly favored movement of One Direction is to do a skipping run from one side of the stage to the other while singing their part. It's almost like a strange musical version of the suicides you might do on a basketball team. Other favorite moves involve temporarily staring into each other's eyes before exploding in different directions (this one is a catalyst for much screaming).

3. And oh, the screaming you'll hear. If I may make a general recommendation, if you're hungover, don't go to a movie that is in 3D and also elicits almost continuous, shrill, banshee-like shrieks, unless you want to spend your afternoon nauseous and terrified. One thing that also confused me was the volume of screaming anytime a member of the band was pictured without a shirt on. These are very young girls...it's just strange for them to be screaming about bare skin when they don't even understand sex. If they got into a bedroom alone with one of them, I don't even know if they'd have any idea what to do. Though this could just be the dad in me: "What are these 12-year-olds screaming about a naked boy for, you should be focused on schoolwork and horses!" 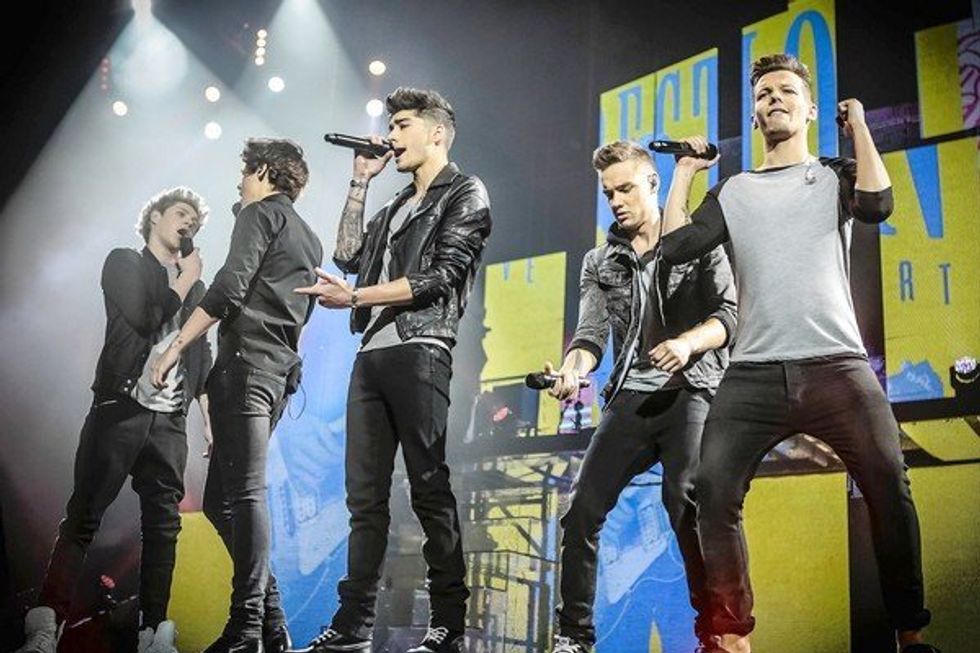 4. These boys perform in front of 30,000+ people every single night (60,000 in their grand finale Mexico City show). As Eli mentioned before, their dancing is not THAT intricate, but just the sheer immensity of these crowds packed into an enclosed space -- not to mention that most of this crowd is currently going through puberty and hormones are shooting off of them like solar flares, make you wonder: HOW DO THEY NOT SWEAT? None of them sweat! None! They wear jeans and cardigans, ALL GREY AND BLACK, as they walked into a Balmain store and said, "We'll take it." They wear these heavy outfits and shake their hips and flex their neck muscles. None of them perspire. NOT ONE. I kept imagining how I look after being in a bar in the summer, or eating Chinese food in my apartment, or going into a Starbucks restroom to hold my sweat hair under a hand-dryer. Maybe when Simon Cowell made One Direction out of clay, he forgot to add sweat glands. Glands are not chic. Fuck glands.

5. One disturbing "gag" the documentary kept throwing at us was a demonstration of the band's power over the screaming masses of fans following them everywhere they go. One scene shows them on top of a high wall in Verona, Italy, where two of them wave to the crowd below, silencing them simply by lowering their hands, only to send the fans into a shrieking frenzy by raising their hands up again. OBEY THEM. WE ARE WEAK AND SICKLY.

6. Aside from this, their back-stories and overall demeanor does cast them in a somewhat humble light. They all come from working-class families in small towns all over England and (1 is from Ireland). Harry Styles worked at a bakery, and in one scene, he goes back to visit the elderly women who he used to work with and flips his hair around and lets one of them grab his butt. Awwwwww. But, these guys at least appear to be genuinely excited and also terrified by their overwhelming stardom. They're seemingly well-behaved, and none have pissed into a McDonald's mop bucket yet or made gravely glib remarks about Holocaust victims, so at this point in time, kudos to them.

7. One thing too, is that they all prefer not to look at themselves as a "boy band," repeatedly emphasizing that they're just a group of guys having fun, who happen to sing. However, any way you look at it, you guys ARE a boy band. The stylists, the choreographer, the content of your songs: all signs point directly to "BOY BAND." At one point they say "We don't like to dance," which I assume is another attempt to distance themselves from N'SYNC and the like, but it just doesn't entirely work. One of the moments in the film that I think really sums this up is early on, when we watch a very disconcerting cover of Wheatus' "Teenage Dirtbag." They want to be the "dirtbag" from the song, but their voices are too pretty, their hair too coiffed, their shoes too expensive. There's no edge to their music. It's more like a river stone, beautiful, but smoothed of all its points and characteristics. And they've never played the gigs that make you a rock musician, never the dive bars and shit shows. The first time they performed together was on X-Factor, and then went straight to touring. The smallest crowd they've had is still in the thousands.

8. Something else that's very strange to me is that they're always singing about a girl, the "you" in all their songs, but the fact is, there is no girl. All these songs are just vaguely about some ideal of a girl. There's something so disingenuous about singing a love song to the vague outline of a girl who doesn't specifically exist. And if these songs really are about a girl, they're about the 35-year old ex-wife of whatever songwriter's responsible for that particular song. This lack of authenticity is what disconnects me from their songs. The lyrics are always that combination of vague and positive that lets girls easily insert themselves in, like some sort of self-esteem Mad Libs. The songs are "about them" the same way horoscopes are "so accurate." With that said, though, watching the film, they really do seem to make many girls who are going through rough phases happy, and who am I to critique that? I'm not their demographic. 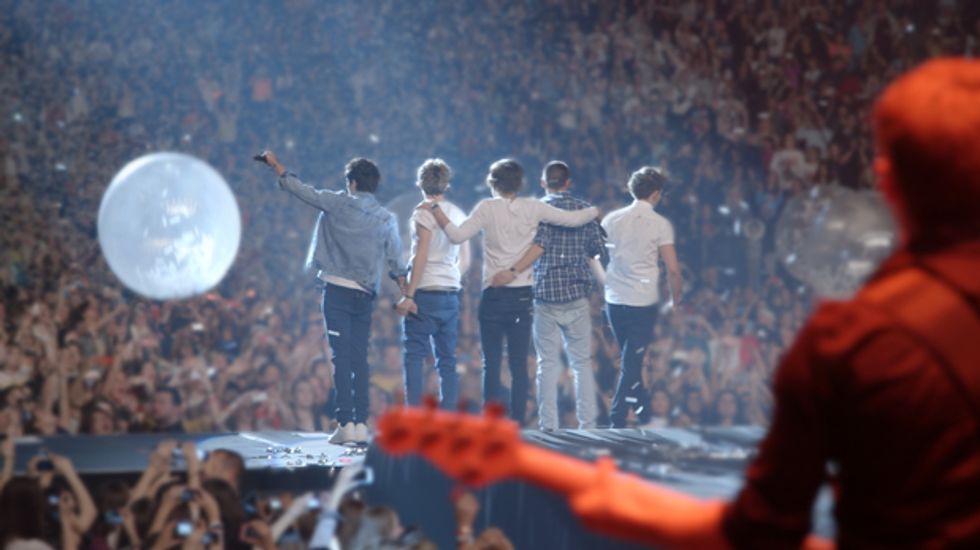 9. Despite all the glimmer and giggles, there was a melancholy undertone to the documentary. This brevity of fame that has become such a fixture in our culture with viral Internet videos, memes, and social media, etc., has never been more apparent with this band. It's almost like this band had an expiration tag as soon as Cowell gave them the once over in their individual X-Factor auditions. The boys seem to be somewhat aware of this fate. At the end of the movie, they decide to go "camping" -- or, go to a section of woods that was closed down so they could pretend to set up a campsite and then go back to a hotel when they finished shooting. They admit that this could very well be the pinnacle of their lives, and that their only hope is that they'll be remembered and stay friends, no matter what. And that "no matter what" is probably that one of them (Harry Styles) will go on to establish a successful solo career, inviting the rest to join him for a mini "reunion" at some awards show many years from now to boost ratings. There' probably another One Direction already being constructed, but for now, they seem to be reveling in being the most famous band in the world, and can you really blame them?

10. After the movie was finished -- and as we fled the theater as fast as we could, still hearing the choir of squeals and screams from inside as the credits rolled -- I was overcome by this pang of investment in this band that I hadn't expected. I don't even think I could tell you a song title of theirs off the top of my head, or hum along to a chorus (aside from "Beautiful"). I couldn't tell you their names (aside from Harry Styles) without Googling them. But I DO like them. I am a fan. Waiting on the subway platform, I told Eli that I felt like I had been brainwashed. "I literally don't feel anything," Eli said.