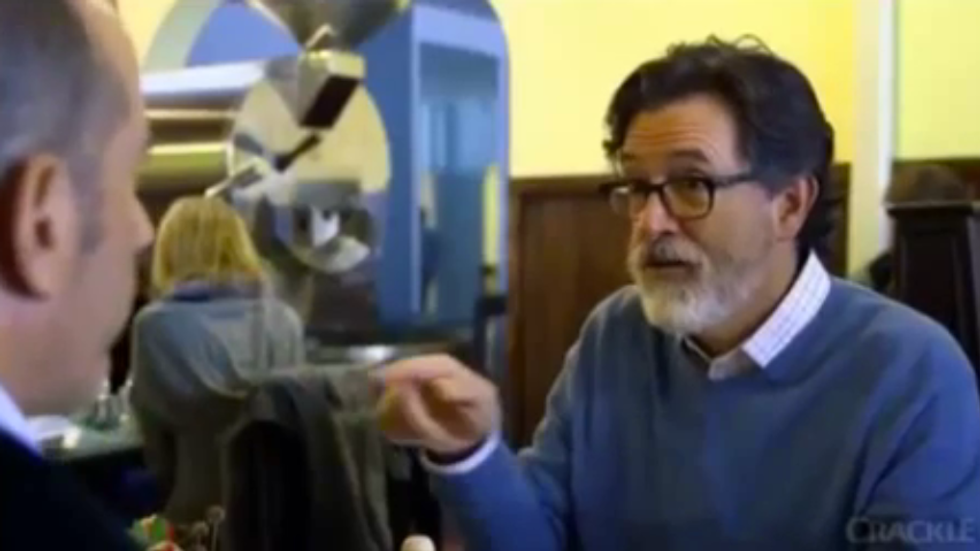 In the midst of getting ready to take over The Late Show from David Letterman in September, Stephen Colbert found some time to appear in the season 6 finale of Jerry Seinfeld's "Comedians In Cars Getting Coffee."  Here's what we learned about Colbert from the conversation that filled his and Seinfeld's visit to Bluestone Coffee Co. in Montclair, NJ in a bright blue sports car.

1. He was going to stop The Colbert Report no matter what.

Turns out he would've ended the show whether or not he had The Late Show lined up afterward. "I was ready to stop," he said, when "the Letterman thing fell in my lap."

2. He was in a FirsTier Bank commercial in the 90s.

This was the one measly gig he got from his days auditioning in Chicago, he lamented. I guess you've got to start somewhere.

3. That new beard is Sean-Connery-inspired.

He's coined the look "a mid-career Connery," though Seinfeld prefers to call it "gruesome."

4. His dad ran a hospital and smoked a pipe.

He likened the late James William Colbert, Jr. to George C. Scott in the movie The Hospital, mimicking his pipe-smoking habits with a stirring spoon. When Seinfeld asked whether he or his father was more feminine, Colbert responded, "Well, obviously I am because he actually smoked and I pretend to smoke with a spoon." Good point.

5. He's not too keen on the whole happiness thing.

"How do you feel about happiness? Where do you rank happiness?" Colbert wanted to know, concurring with Seinfeld's declaration that "it's a foolish thing to pursue" and adding that "suffering is actually a pretty good way to get to happiness." Seinfeld got it: "Like I'm suffering right now trying to make you happy." If only every cafe were full of comedians to eavesdrop on.

When he advised a former supervisor that the best way to handle her divorce was to "think of the thing that you least want to do as probably the right thing to do, and you know it, which is why you don't want to do it," she responded, "Are you sure you're not Jewish?" He took it as a compliment.

He can recite "In the Aeroplane Over the Sea" by heart, and the line "Can't believe how strange it is to be anything at all" blows his mind (and makes Seinfeld lose it).

9. He'd rather be funny than smart.

Which makes him, according to Seinfeld, "a clown, then -- just an idiot in gigantic pants."

He just happens to have dark hair and a white beard. Like ya do.