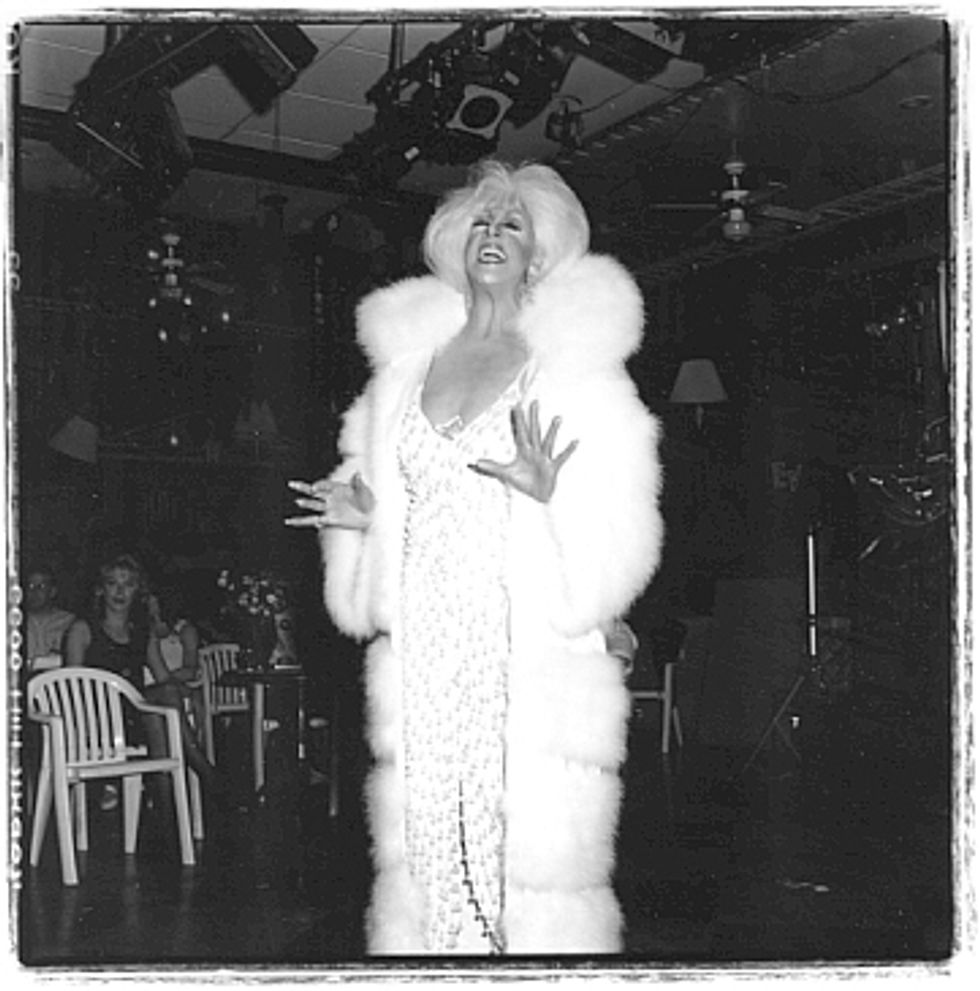 by Michael Musto
PAPERMAG
Dorian Corey performing at Sally's Grammy Awards in 1993. Photo via.
Before several elitist mayors -- and all sorts of other plagues -- came around, there were way more outrageous gay dives to spice up a Gotham night at. Here are 10 of the absolute sleaziest -- which is not always a bad word, mind you.

HAYMARKET (47th and 8th Avenue)
This was an exceedingly real hustler bar in the old Times Square, which featured a bar, booths, a pool table, and mature men spending $20 for a piece of the pie. Yes, 20 bucks! Can you gag?

SALLY'S HIDEAWAY (264 W. 43rd Street)
In a delightfully gender-bending place like this, it made perfect sense that Sally was a guy-- Sally Maggio. He owned this ambient Times Square hangout filled with go-go boy contests and drag (and transsexual) shows from 1986 to 1992. Among the performers were legends like Dorian Corey and Angie Extravaganza. Sally's eventually moved to a nearby location, which they called Sally's II, and then it was Sally's No More.
THE ANVIL (500 W. 14th Street)
From 1974 to 1986, this was the de rigueur raunch palace for frisky gays looking for a late night. On the main floor, drag performers like Ruby Rims and The Amazing Electrifying Grace would alternate with live fisting shows, as well as a fan dancer and guys suspended on ropes over the bar. Between shows, the music pumped and the dancing was as fierce as a bottle of fresh poppers. Downstairs, there was a sex room where guys got to use the bodies they'd worked on all week. The Anvil was very of its time and never boring.

THE MINESHAFT (835 Washington Street)
From 1976 to 1985, this place made the Anvil look like a quaint tea shoppe. The "private membership" club, up a flight of stairs to gratification, insisted on macho attire  -- preppie clothes and cologne were forbidden -- and encouraged all manner of nudity and wild sex acts. I went once and remember that as you walked, the carpet squished. It was like a horror film! The centerpiece of the place was a bathtub where a guy begged to get peed on. He didn't need to beg, since there were plenty of willing givers. (Thanks to huzbears.com for additional info for this piece.)

STELLA'S (266 W. 47th Street)
Straight black and Latino men found that snuggling up with gay male customers was a relatively painless way to pay the rent. So they became the house "entertainment" at Stella's, which several New York drag queens could be found at out of drag -- not working, but working the studs. Stella's exuded a real, palpable Times Square ambience the way, say, Applebee's just doesn't.

ROUNDS (303 E. 53rd Street)
Before the Internet, grandpa types had to grab their walkers and track down hustlers in person. So they went to this faux-swellegant place--which opened in 1979--and amid the tasteful trappings and floral displays, they found love on a one-way street, and paid for it.

THE GLORY HOLE (11th Avenue between 21st and 22nd Streets)
Situated between the Eagle and the Spike was this fine establishment, which was filled with booths that had penis-sized holes in them. Even the dumbest twinks could figure out what to do in there. It was the height of anonymity -- for those who thought one-night-stands were way too intimate.

THE TOILET (400 W. 14th Street)
Similarly, this den of non-Equity reflected its name in a very literal fashion. If you didn't enter wet, you definitely left wet.

CAT'S BAR (232 W. 48th Street)
In the heart of Times Square was this incredibly wrong, yet so right, dive bar, where fresh-scrubbed walk-ins would meet up with rough trade for some marvelous social interplay. Runner up: Hombre (near Port Authority), where the owner, Buddha, presided over the testosterone-driven theatrics.

The 10 Worst Nightclubs in NYC History

8 Forgotten Hangouts That Made NYC Special

The 30 Best Gay Bars in NYC

"Someone Had Just Died on the Dance Floor:" True Tales of '80s Nightlife Insanity
From Your Site Articles
You May Also Like
Fashion