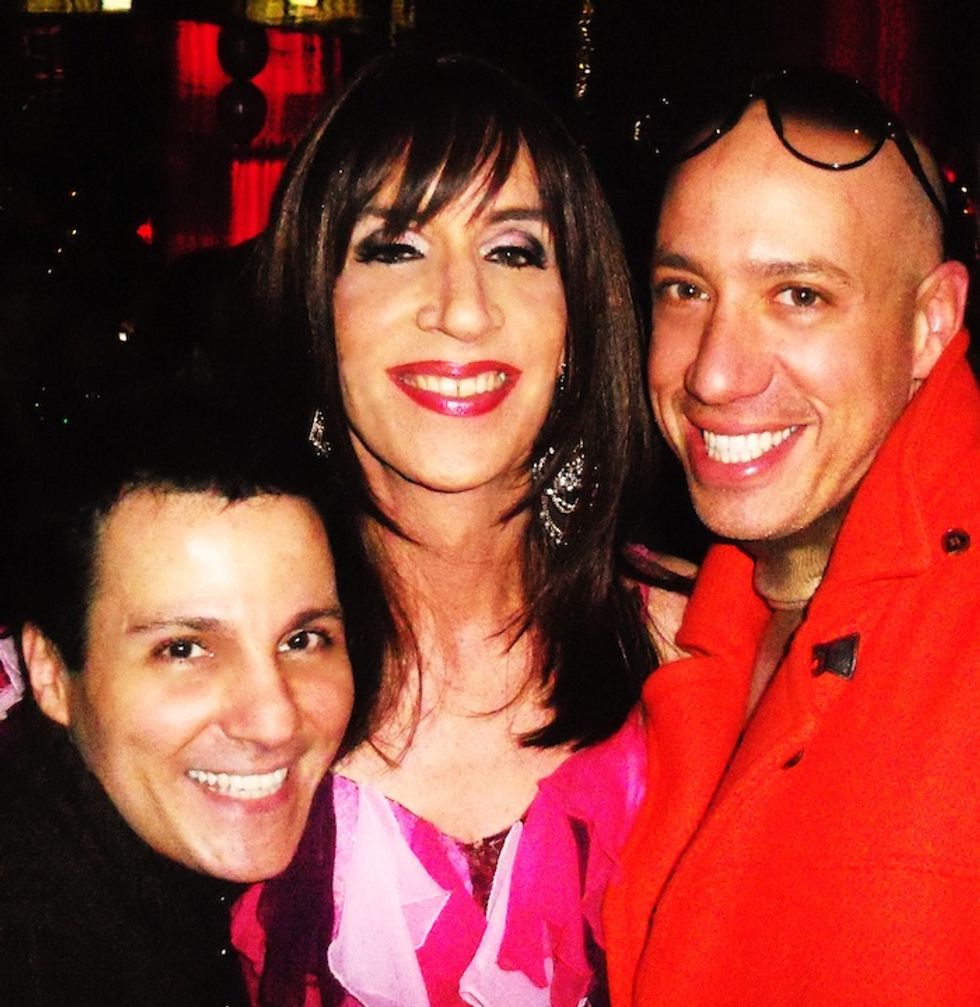 The glory days of New York were extra special thanks to an array of outrageous, shocking, and always amusing television viewing courtesy of public access and leased access TV. That kind of thing still exists -- in fact, a couple of the shows I'm including on this list are still on -- but it was really in the 1980s and '90s that the genre flourished, raised eyebrows, and were the highlights of peoples' TV viewing schedules. Here are the 10 most memorable:

Frankie C., Linda Simpson and Robert Verdi on Party Talk
Party Talk
The creation of Marvin Schwam, this was an entertaining magazine-format show that starred notables like Linda Simpson, Frankie C, Cathay Che, John Marc, Marc Holzman, Brad Lamm, Robert Verdi, and Philomena. It appeared in five cities with its blithe banter, gossip, and cavalcade of LGBT personalities. And the title was apt -- it was a whole lot of talk turned into a weekly party.

Go There TV
Glam awards founder Cherry Jubilee hosted this fun show in which she interviewed gogo boys in the most provocative way imaginable. When this was on, I would definitely, uh, Go There.

Gay USA
This one-hour LGBT news program -- and The Soup punching bag -- started ages ago on Lou Maletta's Gay Cable Network and continues buzzing along to this day. In fact, I was a guest on it just last week! Andy Humm and Ann Northrop are informative hosts on a comprehensive variety of newsy topics, serving up all the important points of view, and they occasionally pause for a healthy argument, too.

Our Soul: Journey to Know Thyself
Stripper-turned-New-Age-healer Linda Pendergraft would engage in winding monologues about a panoply of life issues, and the result was hypnotic and often kind of brilliant. At the end of each episode, I felt healed, if in need of a pot of coffee.

On Patrol
A screechy drag queen and her passive-aggressive partner would do segments interviewing various freaks about town. The highlight was the segment "Peeling It Off With Miss Peel," in which a fetching lass took things off while encouraging others to do so as well. It was a grown-up 'Show and Tell' game that was like the original Girls Gone Wild, minus the sleazy subtext.


Mrs. Mouth
Tony winner Jeff Whitty, a fan of this offbeat show, describes it best: "A man's face was shot upside-down, with facial features drawn on his chin and a wig around his neck." Got that? And the man spoke in a squeaky voice, giving haughty opinions on various topics, in between being fed by someone off-screen with a spoon. Surreal shit.

Ugly George
In the '80s, a man (who actually wasn't that ugly) prowled around the streets of New York with a camera on his shoulder and urged women to flash their breasts. And they did so. "I believe I'm teaching the public," said George at the height of his notoriety. "I'm not a star, I'm a professor." Perhaps -- but, like Miss Peel, he should have removed clothing along with his subjects!