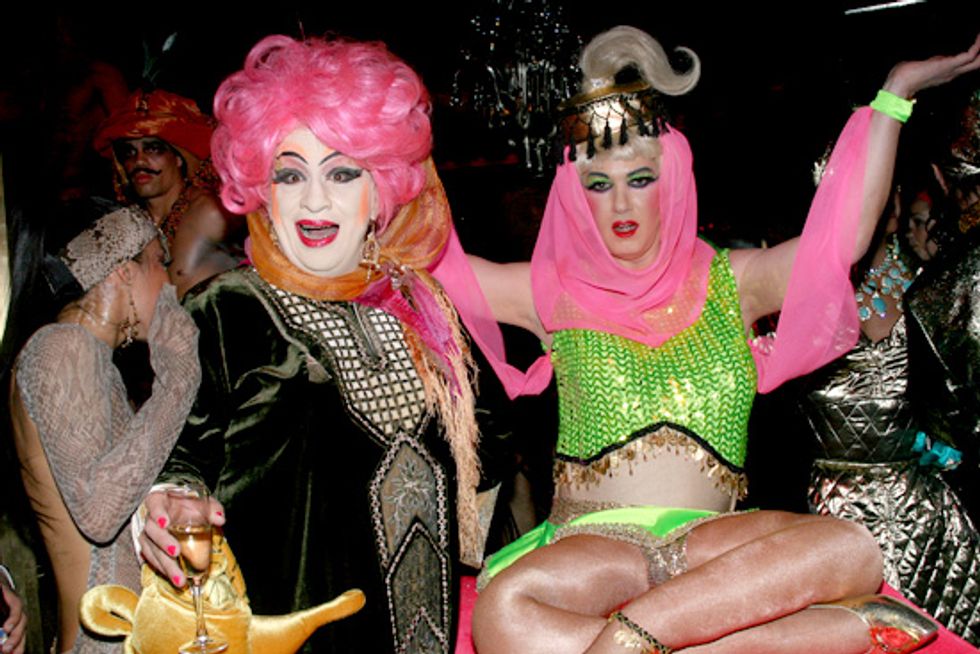 Not long ago, I wrote up the most nightmarish club kids in history, and the complaints started coming in: "How on earth could you forget this one?" and "How the hell could you leave out that one?" Easy: Because there are a lot of them to choose from! After all, we're dealing with the entire history of clubbing, a legend filled with way more kooky people than you can shake a drink ticket at. And we're not just talking nightmares, we're dealing with all manner of off-center, fascinating, and at times admittedly irritating clubbies -- people who've helped illuminate nightspots with their neon hair and personality. Here are 10 more who really got my goat (and milked it).


Photo by Marsha Burns
DANNY THE WONDER PONY
Shirtless, with a saddle on, Danny would romp around the Limelight in the '80s and '90s, getting drunken clubbies and bachelorettes to ride him for tips. I am not making this up. He's actually pretty nice, but I felt Limelight was enough of a barnyard already, lol.

MIRIAM BENDAHAN
With her streaked coifs and self-made outfits, Miriam has always conjured quite a vision, but her poison-ality was a bit much at times. Observers started calling her "Bendan-EAR." But I sort of liked her!

Photo via NY Post
SHAGGY
A middle-aged man with a Chia Pet hairdo, Shaggy was seen at all the best clubs and parties for ages -- because he crashed! I was upset when Page Six started mentioning him in boldface because I thought, "Now he'll be famous and will actually be invited to everything." Not sure if that happened, though.

BRUCE LYNN
Meanwhile, the publicist for Limelight and Tunnel meant well, but working with him often involved a mess-up or five. I'll never forget when my Divine Brown party invites came in blurry because he'd decided to make them 3D without telling me. (A printed up insert with all the info had to be added to each card.) What a putz! Still, I have to admit that I sometimes found him endearingly hapless, in a way. I said sometimes!

Photo by Anderson Zaca via Flickr.
ZONDRA FOX
Offbeat looks. Unpredictable demeanor. The resulting concoction is sometimes reminiscent of a Hammer horror classic, but I'm sure it's just a pose. And I must say she's knowledgeable. Don't hurt me hon!

SEBASTIAN
No, I don't mean Sebastian, Jr. I'm referring to a guy who got onstage at Disco 2000's Unnatural Acts Revue at the Limelight to blithely drink his own pee (and to ingest Number Two, too) as jaded jaws dropped around the room. Controversy erupted when I wrote Sebastian up, gay activists accusing me of spotlighting the seamier part of LGBT life. But the activists were being homophobic by assuming Sebastian was gay. He wasn't!

Brandywine, left. Photo by Caroline Torem Craig.
BRANDYWINE
Possessed with a voice that could stop a truck and a face to match, Brandy had a good side -- like introducing me to an array of Nick at Nite stars and selling Hee-Haw lunchboxes at a kitsch boutique called Howdy Do. But the gal (and her special person, Brenda A-Go-Go) were frightfully immovable when there were cameras around. (Yes, I have Italian Alzheimer's. I forget everything except a grudge.)

A Kitty Boots fashion show at Jackie 60. Photo by Tina Paul via Mothernyc
KITTY BOOTS
The British door gal at the '90s arts-emporium-slash-club Jackie 60 was a charismatic charmer, though if you fucked with the dress code, she could turn on the fury in an entertaining fashion that practically brought out the fire trucks. I'm not surprised she went on to be a big designer.

image via craigcalman.com
ALEXIS DEL LAGO
I made the mistake of being funnier than the grandiose trans diva in a downtown play she was supposed to be the star of. The cast screamed with laughter during my run through, but Alexis just screamed. Next thing you know, my part had been trimmed by about 95%, don't you know. Norma Desmond lives. Other than that, she was utterly delightful.

image via womenwhokickass
BABY DEE
The Cleveland-born singer/songwriter may well be the world's only trans person who plays a harp and an accordion while riding a bike from 10 feet in the air. She's truly out there in the ozone, and is a true original.