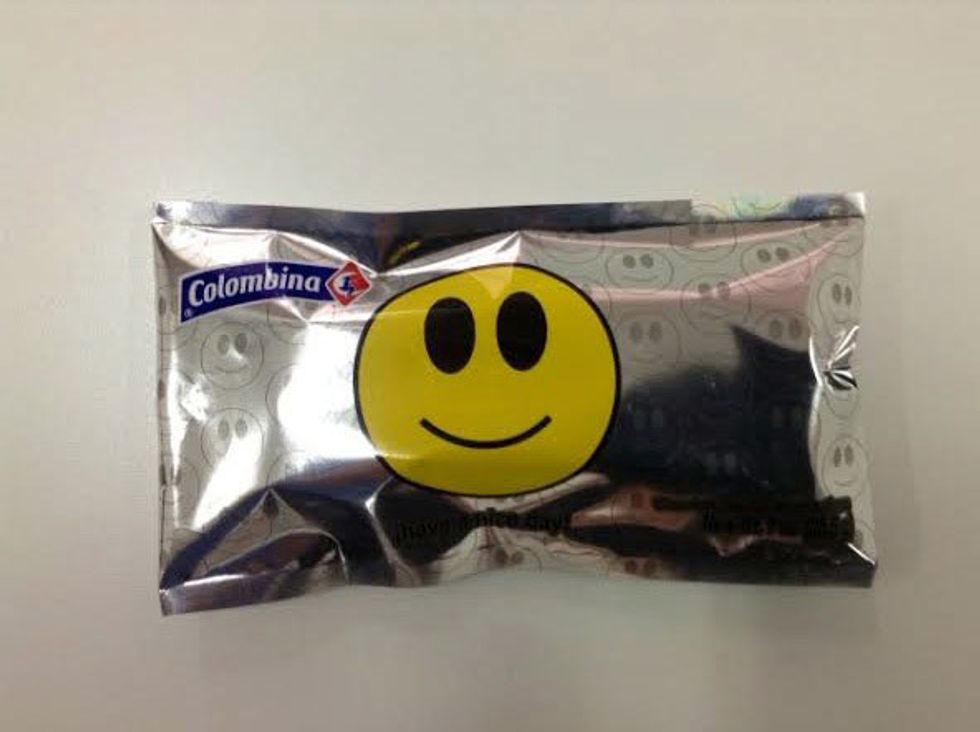 Oscar Murillo's candy factory opens on Thursday, April 24th, 6 to 8 p.m., over at David Zwirner Gallery  (519 West 19th Street) and will be operating until June 14th.  During the installation, "A Mercantile Novel," thousands of candies will be produced and the public is welcome to grab a few and pass them around to hungry New Yorkers. (See one pictured above.) There's even a special website to document the exhibit. The London-based artist, Morillo, collab'd with a candy company called Colombina that's from his native country, Colombia.

The Vancouver-based artist Stan Douglas and the National Film Board of Canada of put together a cool, interactive installation called "Circa 1948" that's only open from April 23rd to the 26th down in Tribeca at the Bombay Sapphire House of Imagination (121 Varick Street).  The projection-mapped, immersive environment "attempts to evolve a new visual and narrative language" using emerging technology. The closing party is Saturday night. 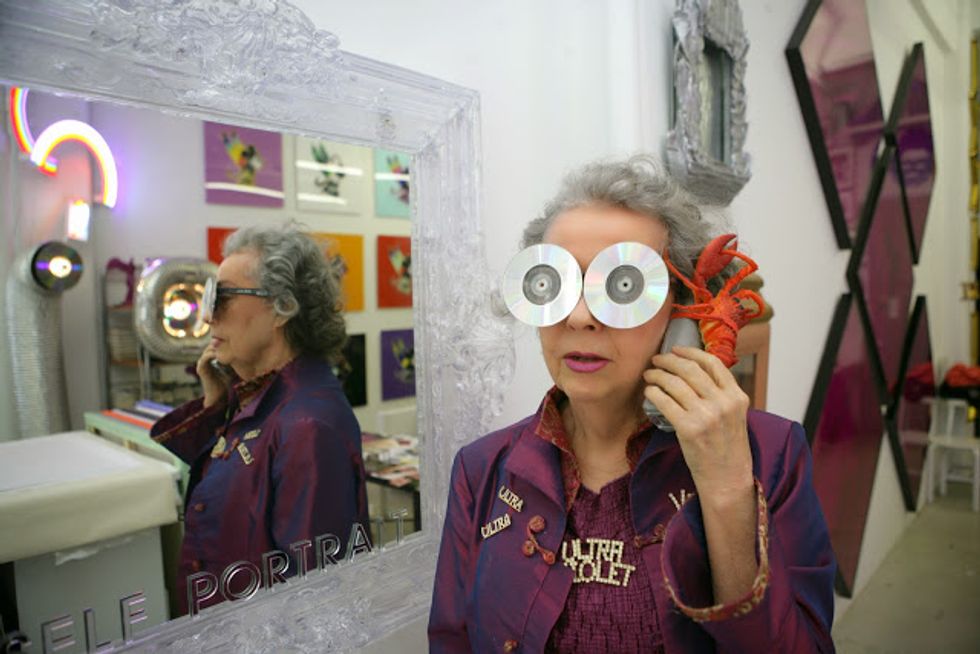 The Dillon Gallery () (555 West 25th Street) has a great show up now by one of Andy Warhol's superstars, Ultra Violet, called "The Studio Recreated."  It includes all kinds of art and personal stuff like books, records, tapes etc. and is a "celebration of the 50th anniversary of Warhol's Factory.  Check it out before June 3rd 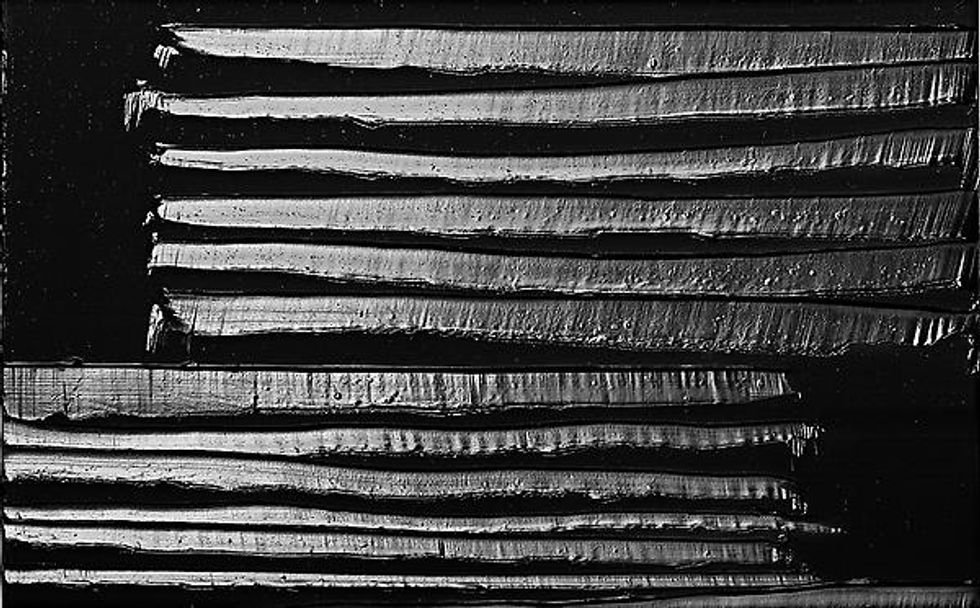 Galerie Perrotin and Dominique Levy Gallery (909 Madison Avenue) are opening the first New York exhibition in ten years by the acclaimed French artist Pierre Soulages on April 24th, 6 to 8 p.m.  On view through June 27th, this important show features fourteen recent paintings from the artist's ongoing Outrenoir series alongside works created in the 1950s and 60s, all on loan from major museums and private collections. 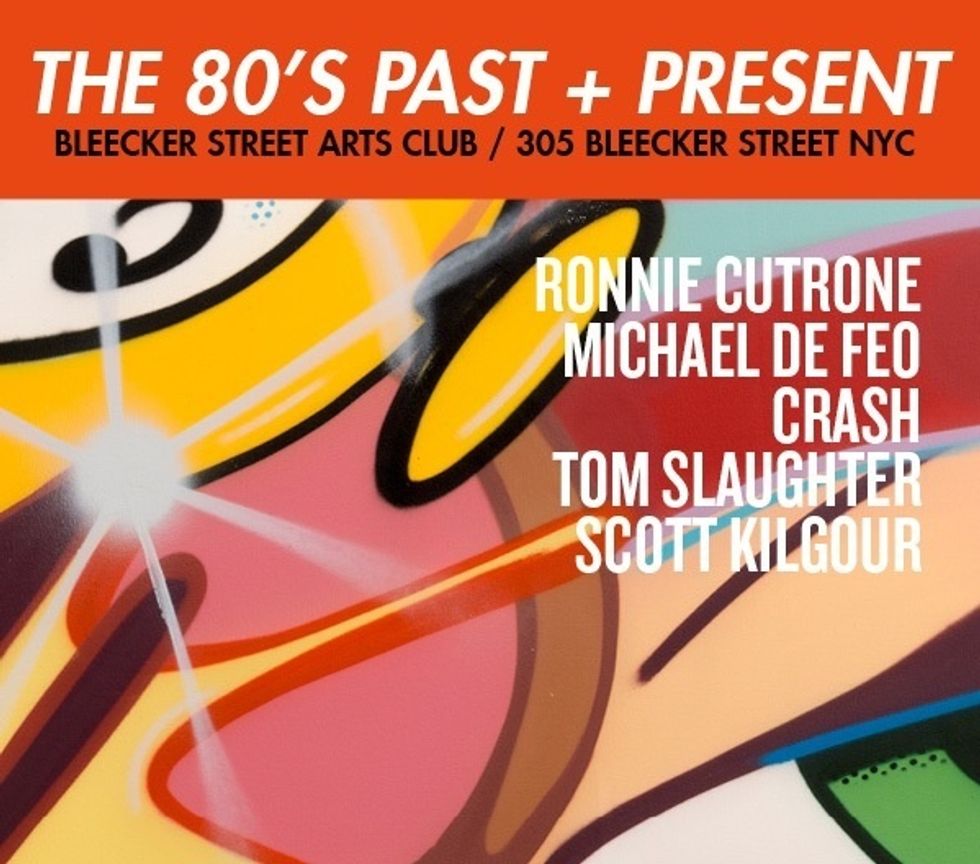 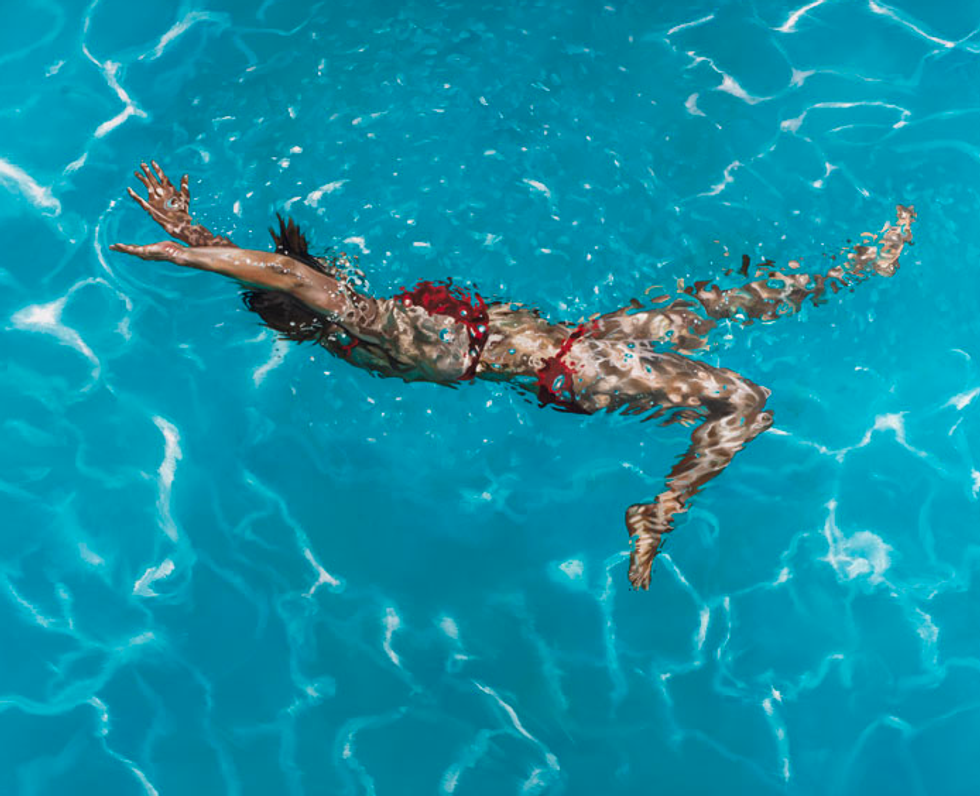 The Quin Hotel (101 West 57th Street) is launching a "art's residency" program this week with an exhibition by the photorealist painter Eric Zener in the hotel's lobby.  The California artist also has an exhibition opening on Saturday, April 26th, 6 to 8 p.m., at Gallery Henoch (555 West 25th Street)  that is on view until May 17th. 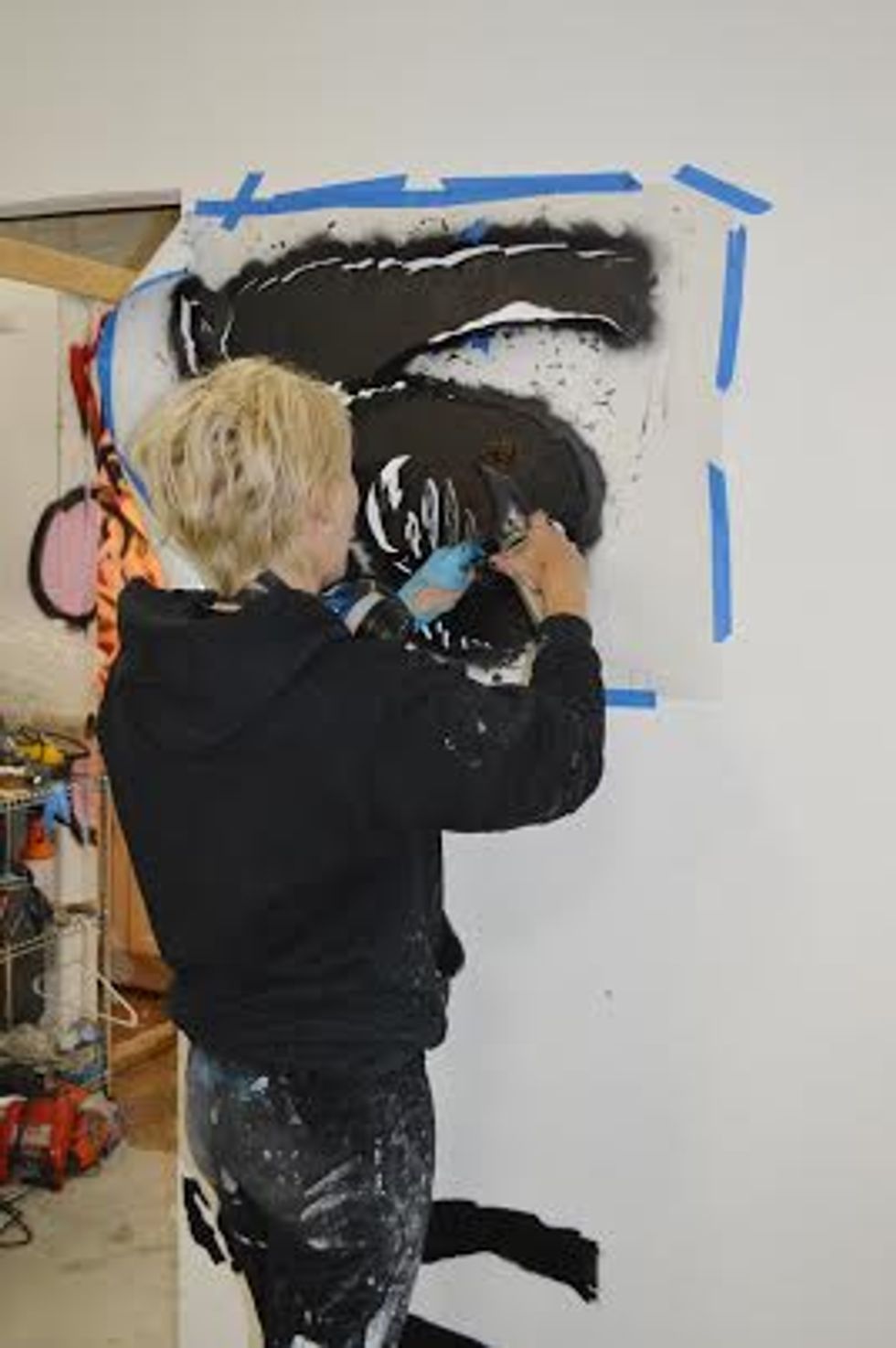 On Saturday, April 26th, 7 to 10 p.m., there's a reception for the opening of a joint exhibition, "Unextinguished," featuring works by photographer Martha Cooper and the New York street artist Elle at Bushwick's MECKA Gallery (65 Meadow Street).  Look for a large-scale, site specific installation and check out the above shot of Elle, hard at work prior to the opening.  It is up until May 10th.

The second Rock 'n' Roll Poster Bowl is this Sunday, April 27th, from 2 until 7 p.m. at Brooklyn Bowl (61 Wythe Avenue, Williamsburg). The show features hundreds of examples of poster art spanning fifty years from various dealers and there will also be artist signings and special guest; all brought to you by the incredible DJ Uncle Mike, Moonset Gallery and concertposterauction.com. 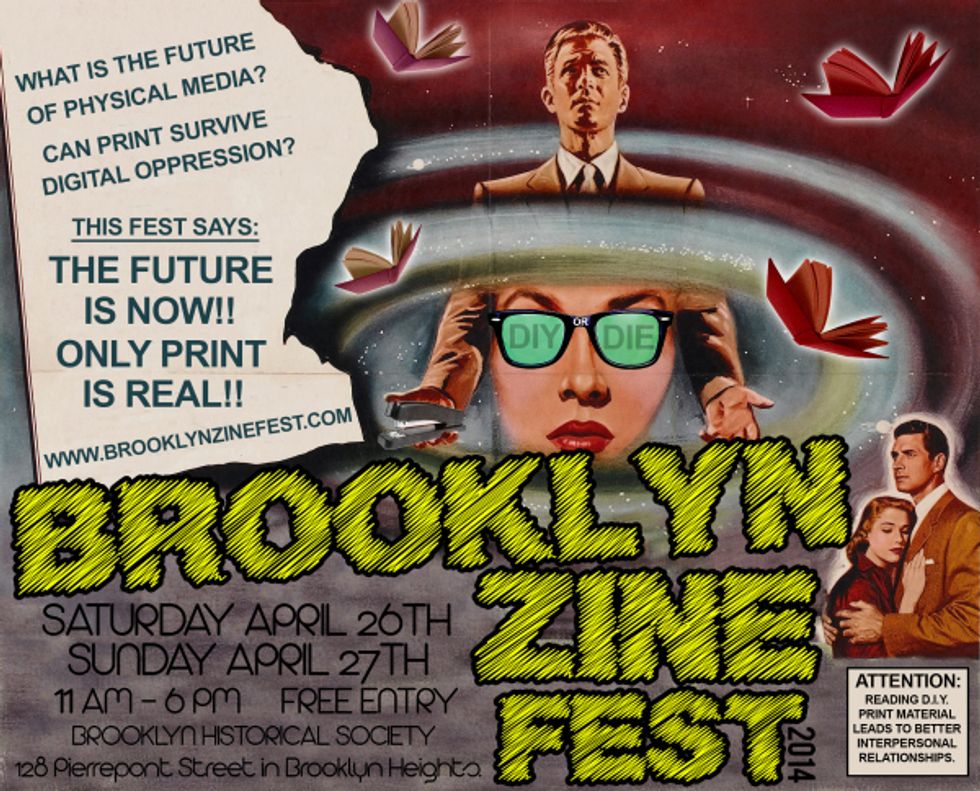 There's also a Brooklyn Zine Fest this weekend at the Brooklyn Historical Society (128 Pierrepont Street, Brooklyn Heights) with 75 writers, artists and small presses on hand to entertain your brain.

On April 29th, 7 p.m., the Storefront for Art and Architecture (97 Kenmare Street) opens an exhibit called ""Letters to the Mayor" that features 50 letters written by international architects to the political leaders of more than 20 cities around the world.  The letters -- offering various ideas, concerns and desires -- will be on view until May 24th. 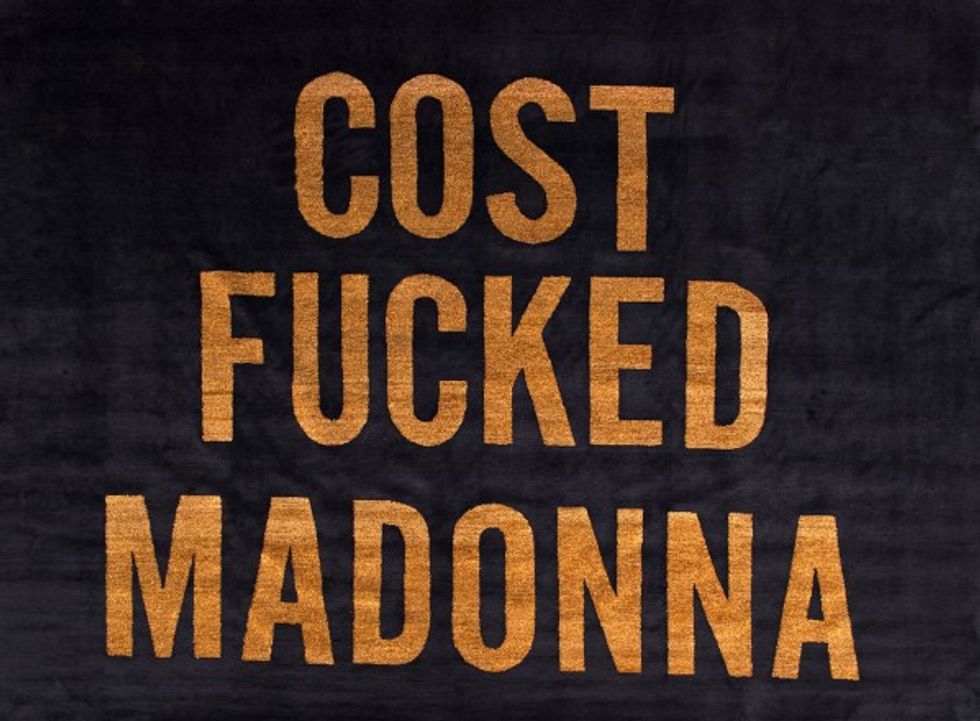 Luxury carpet purveyor Carini Lang (335 Greenwich Street) jumps into the street art market with a big group show called "Back Against the Wall." Twenty artists including Cost, Elle, Baser, Stinkfish, Earsnot and Rae contributed designs for fifty "graffiti-inspired" carpets that were hand woven in Nepal.  They look great, but they're not cheap; one designed by Cost is going for $60,000

And finally, don't forget that the first New York edition of the Lost Lectures (with Hyperallergic) is this Friday, April 25th, 8 p.m. at a top-secret venue.  Tickets are HERE.  Note that Amanda Lepore has been added to the line-up.