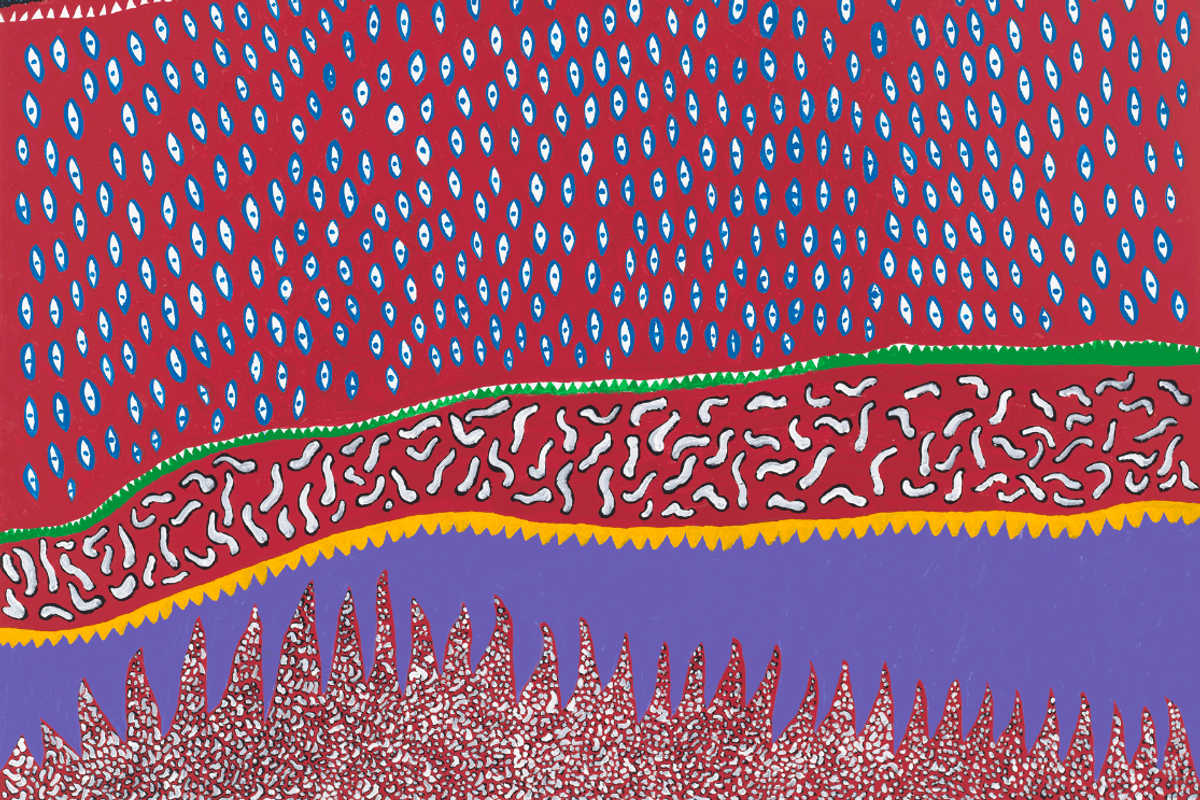 10 Must-See Art Shows (and One Magazine) Opening This Week

Gordon Matta-Clark, Bronx Floors, 1973. Via the Bronx Museum of the Arts

The Bronx Museum of the Arts (1040 Grand Concourse, Bronx) opens "Gordon Matta-Clark: Anarchitect" on November 8 and on view until April 8, 2018. This is a major exhibition of works by a New York artist who died in 1978 at the age of 35; and, literally, made a mark on NYC in the 70s by cutting into — and at times removing — large chunks of buildings. These interventions were interactions with and comments on urban development, zoning, community and architecture itself. In 1971 he also co-founded the SoHo restaurant, FOOD, one of the city's first to focus on organic and locally-grown food.

Yayoi Kusama, INFINITY MIRRORED ROOM - THE SOULS OF MILLIONS OF LIGHT YEARS AWAY, 2013 via David Zwirner

The 5th edition of Nitehawk Cinema's "Shorts Festival" runs from November 7 to 12 with tons of screenings, special events, talks and parties including the road-show version of the Eyeslicer TV show featuring "a robot host, communal milk and cookies, and an episode presented in special Smell-O-Vision" on November 8, 9:15 p.m.; and opening- and closing night parties in the cinema's bar.

The Speaker of the House made a magazine! Well, sort of. Actually the mag is a 200-page parody called "Paul Ryan" that was put together by the same folks (James Folta and Andrew Lipstein) that created "The Neu Jorker" in the summer of 2016. We're expecting genius...and look forward to their version of Pepper...sorry, PAPER. The mag's launch party is at Kickstarter headquarters (58 Kent Street, Brooklyn) on November 2, 7:30 p.m.

AFA Gallery (54 Greene Street) opens "Pop Tarts" — "an exploration into the masks worn in the face of adversity and negativity" — on Saturday, November 4, 6 to 8 p.m., and on view through December 1. Three artists (Colin Christian, Sas Christian and Vlada Haggerty) portray their own idea of the "dangerous woman."

Gladstone Gallery (515 West 24th Street) opens a show of new paintings by Richard Prince on November 2, 6 to 8 p.m. These large "Ripple Paintings" began with Playboy cartoons from the late-60's that were covered with "unevenly-dispersed...monochromatic watercolors" and then inkjet printed onto canvas. Up until December 22.

Celebrate the 100th anniversary of women gaining the right to vote in New York State at a new exhibition called "HOTBED" opening on November 3 at the New-York Historical Society (170 Central Park West). The focus is on the Greenwich Village bohemian scene in the early 20th century; plus there's a short film called "We Rise" — narrated by Meryl Streep and featuring music by Alicia Keys — spotlighting the women at the center of the action. On view through March 25. And, in honor of Veterans Day, admission to the museum is FREE to everyone on November 11 and also FREE all weekend (November 10, 11 and 12) to veterans.

Paul Kasmin Gallery (515 West 27th Street) has the first solo show of Bosco Sodi's clay cube sculptures on view from November 2 to January 6, 2018. Titled "Caryatides," the exhibition includes a new monograph with a forward by Dakin Hart, published by Hatje Cantz. The artist was in NYC's Washington Square in September to build, tear down and give away a wall made of clay timbers fired at his studio in Mexico.

Roberta Allen, City of Dying Dreams (detail), 2017. Via Minus Space

Minus Space (16 Main Street, Suite A, DUMBO, Brooklyn) opens "Some Facts About Fear," their second solo show by New York-based artist Roberta Allen, on November 4, 6 to 8 p.m., and up until December 23. Look for a new sculptural installation of 100 vertical forms assembled from wooden shapes and 40 works on paper produced with everything from coffee and markers to colored pencils. And don't forget that DUMBO's First Thursday Gallery Walk is November 2, 6 to 8 p.m.

Three Star Books presents four new paintings by Sean Micka at Grand Army Collective (184 Sterling Place @ Flatbush, Brooklyn) opening on November 3, 6 to 9 p.m. Mika is a Brooklyn-based and the works are highly-detailed depictions of items from auction catalogues. This show is part of a series of exhibitions and performances in a new space conceived by Janine Foeller and Micky Schubert.

Metro Pictures (519 West 24th Street) opens an exhibition of paintings and sculptures by LA artist Jim Shaw on Thursday, November 2, 6 to 8 p.m. This is his first NYC show since his big 2015 survey at the New Museum and includes paintings that "incorporate symbols and characters of the past to comment on our fraught present." On view through December 22. On December 6, Shaw's band D'red D'warf will perform at Soundscape Park (400 17th Street, Miami Beach) as part of AB/MB 2017.

The Metropolitan Museum of Art (1000 Fifth Avenue) invited 12 artists to share their photos and videos with another artist over a 5-month period — no messages, captions or social media allowed. The results are currently on view in a show called "Talking Pictures: Camera-Phone Conversations Between Artists" that closes on December 17. On November 3, 1 p.m., Half Gallery's Bill Powers is hosting a walk-through with two contributing artists: Daniel Heidkamp and Cynthia Daignault. It's FREE, but please rsvp to erin@halfgallery.com.

Splash photo by Yayoi Kusama, Resting at the Riverside, 2013 via David Zwirner.