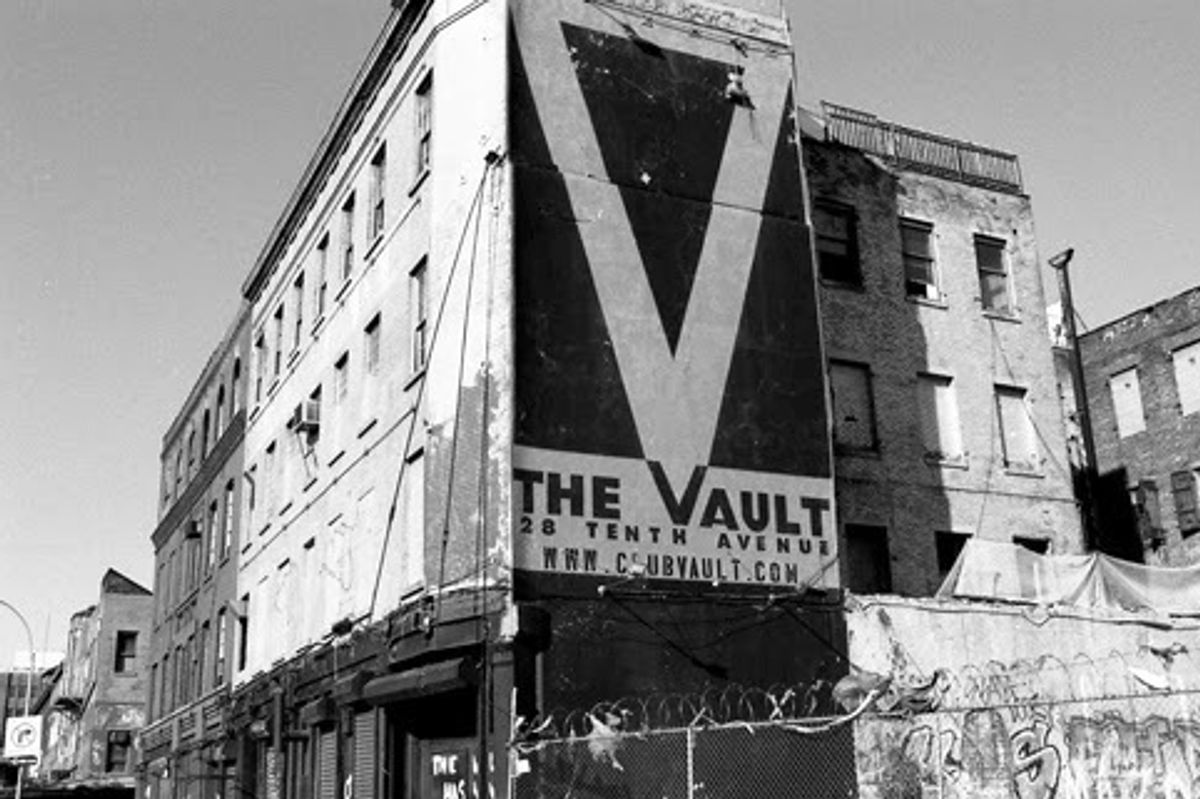 Before sites, there were actual sights! Prior to the age of hookup sites and aps taking the place of bar crawls for so many people, there was actual sex in the clubs! Some of this action happened in clubs that were designed for such things, and other times it just popped up in ordinary dance halls because hormones just happened to rage in the heat of the glitter ball. Here are some of the most eye opening things I've seen of this ilk through the years:

1. THE VAULT—the S&M club in the Meat Packing District, from 1992-2001—was the most fabulous place for the glitterati to get whipped and chained. There were so many visions there that seared into my impressionable mind, but one of the most memorable was a suited guy (probably a CEO) being spun around on a large wheel, as party guests dripped hot wax all over him. I'm sure he deserved it—but can you imagine the dry cleaning bill?

2. At the same dungeon of iniquity, the favorite parlor game was something called "PISS LIMBO" It involved some willing slave crawling under a limbo rope through tons and tons of pee, as the crowd cheered their guts out. I prefer Charades myself.

3. In the late 1970s, I heard about a Village gay bar called THE INTERNATIONAL STUD. Well, I breezed in and found it fairly uneventful, with just a handful of patrons dotted around the pleasant but rather boring place. But then I decided to stroll over to what looked like another room. Sure enough, that space was packed—with a cluster fuck of guys engaging in one big, communal sex act, obviously trying to break a record for the most blow jobs performed in a small space in a matter of hours! It was shocking, I tell ya! The place ended up being memorialized in Harvey Fierstein's Torch Song Trilogy. That site is now a restaurant, but don't order the cream sauce.

4. Similarly, I judged a stud contest at Fire Island's BELVEDERE HOTEL four years ago. When the three contestants started to get orally fluffed by each other in a hallway, I wondered just what I'd gotten myself into. But that was nothing. The aftermath was Sodom and Gomorrah, with groups of guys getting it on around the grounds, assuming all kinds of positions in every possible configuration, as if the International Stud had never closed, it just moved to a resort. The fuckers and suckers carried on so fervently, it looked like it would take a hurricane to make them stop. Fortunately, it did rain.

5. "We have to go to THE MINESHAFT," my then-roommate said in the early 1980s, referring to the raunchy Little West 12 th Street sex club for frisky gays. Agreeing that this would be good for my nightlife education, I went, expecting to see a lot of bj action, as at the Stud, but things were much kinkier here. First of all, the carpet squished as you walked on it, and I could only imagine with what. Secondly, the centerpiece of the place was a bathtub, in which a male with self-esteem issues stretched out as guys gathered around to relieve themselves all over him. Piss Limbo, anyone?

6. As long as I'm talking about squishy carpets, get this: Even beyond Danny the Wonder Pony, Lady Hennessy Brown, and Woody the Dancing Amputee is GEORGI0 THE HUMAN CARPET, the ultimate novelty act to kink up the night. A massage therapist from Connecticut, Georgio predated the movie Room by wrapping himself up in a rug, with only his eyes and nose peeping out, and laying around nightclubs for people to walk and dance on him. The whole thing gives certain clubgoers a thrill (I guess they've always wanted to walk all over someone), and it also happens to be Georgio's personal fetish. Afterwards, he probably needs a massage therapist.

7. In 2011, I finally went to the annual gay circuit event called THE BLACK PARTY, which was then held at the cavernous Roseland (which must have had a hell of a custodial staff). The party drew thousands of shirtless gays who'd come to dance, be sexy, and act dir-tay. At the peak of the night, I opened a swinging a door on the balcony and found a scene I described thusly: "Three guys had dropped to their knees faster than old socialites doing a Pilates workout. Down the hall—which was very The Shining as directed by Helmut Newton—I came upon a suggestively lit room with some more knee action, and next to it was an armpit-dark space that turned out to be the evening's gay outreach center, as it were. Go in there, and you could actually be done by your boyfriend without even knowing it."

8. I saw water sports up close when I went to the set of the 550-PEEE COMMERCIAL ("The extra 'e' is for extra pee") and watched the pee girl, Tracy, get gamely rained on. But all thoughts of kink were instantly demystified when I learned what they were actually spraying her with in the commercial—Gatorade! Now that was shocking.

9. I didn't see anything at THE ROXY—the Saturday night gay bash at the former roller rink—but I certainly heard stuff. If you went into the bathroom to do your business, you were likely to hear all manner of moans and groans coming from an adjacent stall. But that whole schtick didn't last long. They ended up hiring this short, cute Hispanic woman to sit in the men's room and make sure there wasn't more than one person per stall—or try to, anyway. Imagine the things she could tell her husband when she got home?

10. Here's a shocking sex act that didn't happen. At a '90s nightclub dinner that consisted of me, another columnist, some clubbies, and Christopher Walken, ONE OF THE HANGERS-ON at the table leaned into me and purred, "I'll give you a hand job in the bathroom in exchange for a mention." Yikes. Normally, I love to be stroked, ba dum pum, but the blatant crassness of his offer appalled me—especially in front of an Oscar winner!