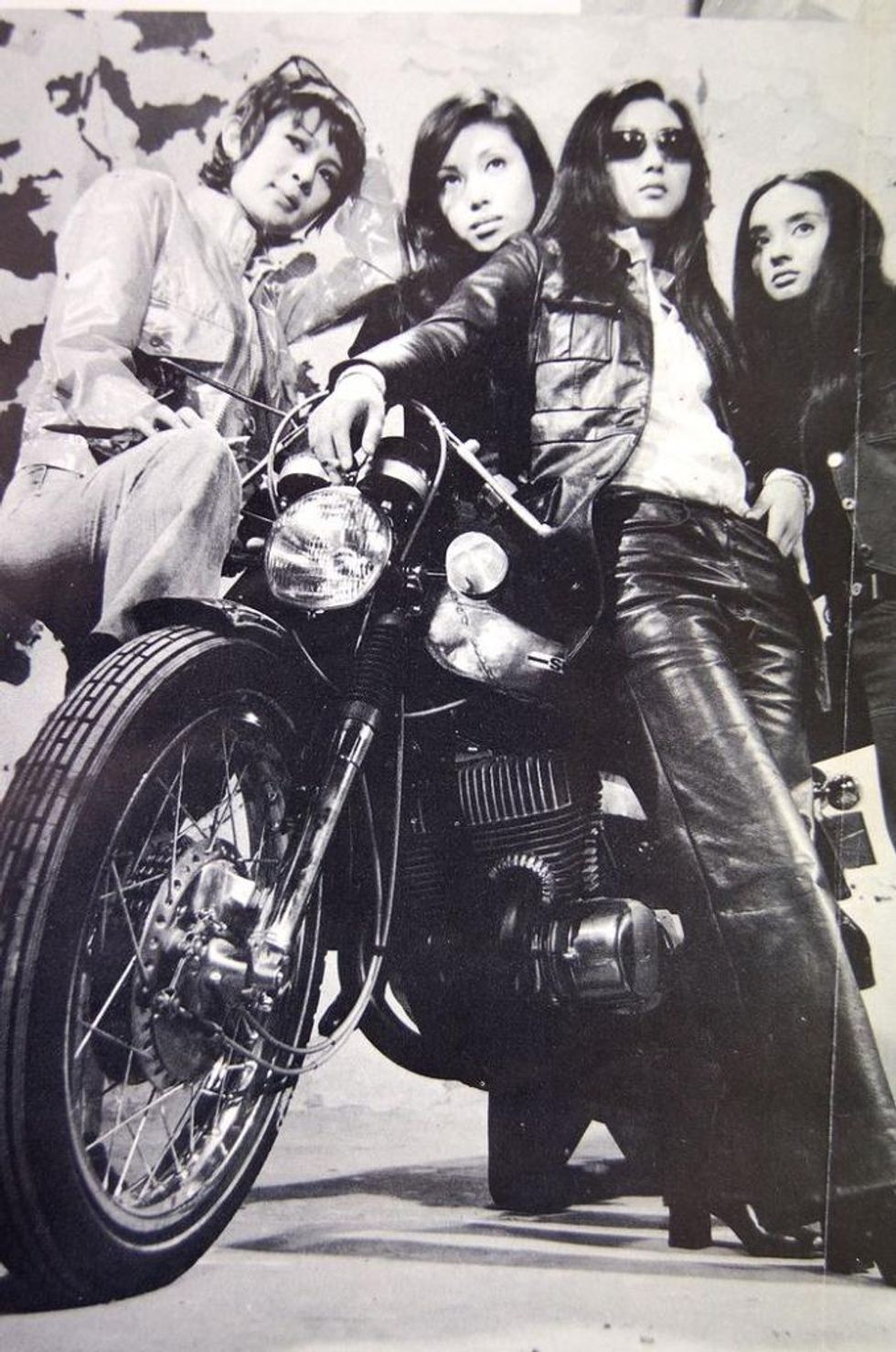 by Dennis Dermody
PAPERMAG
Bad girl films have always inspired me. And in exploitation movies there's nothing more fun than girl gang flicks. There, the filmmakers could push all the sex, violence and hard-boiled dialogue and disguise it as feminism while actually titillating drive-in audiences. Here are 10 kick-ass examples of the genre.
Faster, Pussycat! Kill! Kill! (1965)
In my church of cinema, there aren't many directors I pray to like Russ Meyers. With his big-busted babes, mock violence and nasty dialogue, his movies make your head explode. This is one of his greatest. Starring the fabulous Tura Satana as Varla, the vicious lesbian leader of a hot rod-driving girl posse with a preference for skin-tight black (and plenty of cleavage), the film features she and her two stripper friends (Lori Williams & Haji) holed up in the desert trying to find an old hermit's cache of gold. Full of frugging, karate fighting, and dazzling double entendres, it never ceases to amaze.

The Violent Years (1956)
Paula Parkins (Jean Morehead) is the innocent-looking teen daughter of a prominent newspaperman, but secretly the leader of a group of pistol-whipping gals who rob filling stations, abduct and rape men, and smash up schoolrooms for a Communist organization.  "These aren't kids, these are morons!" says the sheriff. This riotous black and white wonder written by bad movie master Edward D. Wood Jr. (Plan 9 From Outer Space) ends with the dying Jean giving illegitimate birth in a prison hospital ward croaking out her final words, and, philosophy of life: "So what!"

Stray Cat Rock: Sex Hunter (1970)
The third of an enjoyable Japanese delinquent bad girl trilogy stars Meiko Kaji as Mako, the black hatted, surly, leader of a group of ruthless schoolgirls "The Alleycats," who get their kicks fighting, mugging men and dancing to rock and roll. They get in a beef with a racist rival gang "The Eagles" (run by an impotent, mustached, sunglass-wearing, creep called The Baron) when one of the girls starts dating a "half breed." It all ends in a violent confrontation with Molotov cocktails in Coca Cola bottles and a shotgun finale. With psychedelic colors, great fashion, and entertaining interludes of an all-girl pop band called Golden Half, this film by Yasuharu Hasebe really rocks.

Switchblade Sisters (1975)
Director Jack Hill was the king of female action flicks -- especially his work with the legendary Pam Grier in Coffy, Foxy Brown and The Big Bird Cage. But this is a trash masterpiece. Joanne Nail plays Maggie, the new member of "The Dagger Debs" led by the badass Lace (played by Robbie Lee, who snarls through her teeth throughout the whole film). But jealous Patch (Monica Gayle) is out to frame Maggie, which leads to an all out war with a rival gang. Customized tanks, the Black Panthers, and machine guns all play a part of the insane finale of this grindhouse great.

The Female Bunch (1971)
Schlock filmmaker Al Adamson has forever fascinated me -- and not just because the director was killed by his contractor and buried in cement in his Jacuzzi. His movies were bad in fabulously entertaining ways. From the inadvertently hilarious Dracula vs. Frankenstein to Satan's Sadists, his movies frequently defy description. And he often starred his leading lady in real life, the buxom and glamorous Regina Carrol. In this movie Carrol (sporting big blonde hair) plays a go-go dancer who is part of a secret man-hating society in Utah. They all look like showgirls and are involved in the drug trade. They also ride horseback to trap, brand and execute their male enemies. A few sequences were shot at Spahn Ranch in California while Charles Manson and his merry band were there. "They treat their horses better than their men!" screamed the ads.

Olga's House Of Shame (1964)
The best of the notorious "Olga" films, directed by Joseph P. Mawra in the early 60s. Olga (the wonderful Audrey Campbell) is the sadistic leader of a crime syndicate involved in prostitution, narcotics and jewel smuggling. She recruits girls and brings them to what looks like an abandoned sawmill to punish them mercilessly until they shape up. Lots of whipping, electrocution and a hilarious voice-over describing the action with deadpan weirdness.

The Doll Squad (1973)
Director Ted. V. Mikels is a real character. A burly Ernest Hemingway type, he lived in a castle in L.A. with seven "castle ladies" and directed some memorably loony films like The Corpse Grinders, The Worm Eaters and Astro-Zombies. This film, a definite model for Charlie's Angels, is about an all-girl team of bodacious assassins hired by the CIA to combat rocket saboteurs. Tura Satana (of Faster, Pussycat! Kill! Kill! fame) stars as one of the gun-toting dames.

Teenage Doll (1957)
Teenage Doll is a bizarre, little-known 1957 Roger Corman film starring June Kenney as a pretty blonde teen who accidentally pushes a member of the "Black Widows" off a roof and spends the night trying to escape from the vengeful girl gang. It includes surreal touches like the heroine's weird mom (Dorothy Neumann), a birdlike elderly woman who wears little-girl dresses and pigtails, and a scene where the heroine finds her sister sitting in the dark eating a cardboard box.

Andy Warhol's Bad (1977)
A wildly underrated pitch-black comedy from the Andy Warhol gang, directed by long-time Factory associate Jed Johnson. The divine Carroll Baker ("Baby Doll") stars as Hazel, running a beauty salon out of her Queens house but making extra cash from sending out a group of morally bankrupt women to commit paid "hits" like throwing an unwanted baby out of a window, crushing the legs of a man in his auto shop, setting a fire in a movie theater and even stabbing a dog. Perry King is the dim but hot drifter and new member of the household. Susan Tyrrell is pitifully hilarious as the dowdy daughter-in-law living there. Standouts include the deadpan, sardonically funny, Geraldine and Maria Smith and the unforgettable Brigid Berlin. This warped wonder seriously needs to be re-discovered.

Spring Breakers (2012)
We've come a long way from Where the Boys Are with this demented, fabulous, Harmony Korine film about a bunch of female college students who commit armed robbery to fund their Spring Break vacation.  Candy (Vanessa Hudgens), Faith (Selena Gomez), Brit (Ashley Benson) and Cotty (Rachel Korine) keep up their string of lawless terror when they get to Florida, hooking up with a colorful drug dealer named Alien (a funny James Franco) who has cornrows and gold-plated teeth. It's Girls Gone Wild with string bikinis and machine guns and Korine's hallucinatory use of color creates a wild head-trip of a film.
You May Also Like
Famous People