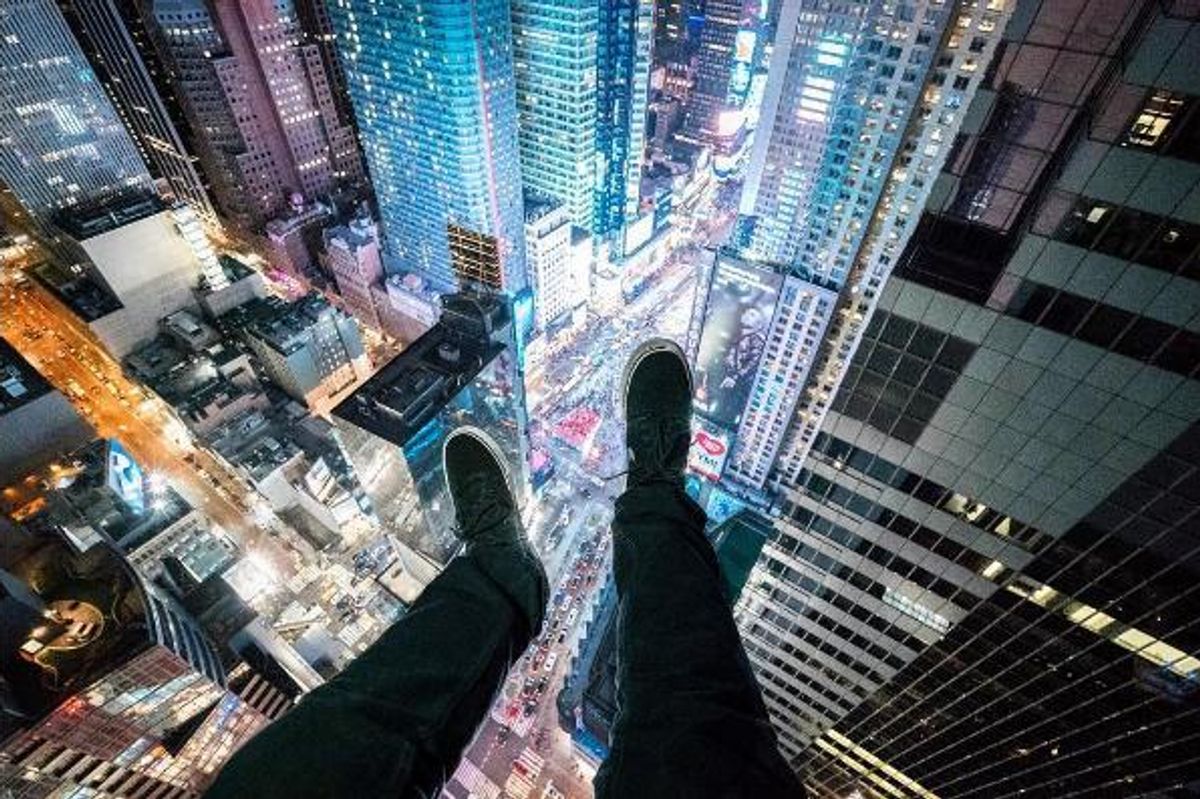 In a nod to our annual "Beautiful People" series, we've started a column featuring the most interesting people you should be following on Instagram every month. This month we're recommending a vertigo-defying urban explorer, a New York nightlife staple, a pop culture ephemera archive, the Eastern European Rihanna, and more. Check them out, below.

Ethan James Green is a New York-based portrait photographer known for his depiction of the city's vibrant community of LGBTQ youth. Originally from Grand Rapids, Michigan, Green began taking pictures with a simple point-and-shoot camera at an early age. He found a mentor in David Armstrong, a famous portraitist, who inspired Green to focus on black and white portraiture. Green's work showcases New York's vivacious LGBTQ community, with stunning shots that feature both up-and-comers, like Avie Acosta, and established names, like Hari Nef.

If you think binge-watching Keeping Up with the Kardashians actually keeps you up-to-date on all things pop culture, well, you're only about half right. For the half you're missing, follow Pop Culture in Pictures, which features stills from classic films, pop art, and shots of iconic models, singers, and actresses, like Jane Birkin. It's a Cliff's Notes to the sophisticated, oft-forgotten elements of vintage pop culture, serving up interesting tidbits--like that Ru Paul used to hang with Kurt Cobain--and stunning visuals.

Kyle Luu is a New York-based wardrobe stylist whose work with the likes of singer Tinashe and rapper Travis Scott has been featured on the covers of Complex and Harpers Bazaar Men. Most recently, she worked with fashion's current darling, Eckhaus Latta on their latest digital campaign. Luu's account exists as a portfolio of her work, as well as a mood board of inspirations for upcoming projects, and her unusual and progressive aesthetic is a must-follow for any fashion aficionado.

Leo Becerra is a Venezuelan transplant who quickly became a nightlife staple upon his arrival in New York in 2009. The social butterfly attends and hosts some of the concrete jungle's most coveted nightlife events, while his days are spent creating ad campaigns for fashion titans like Balmain, Alexander Wang, and Balenciaga.

Ever since Fetty Wap released his video for "Wake Up" last month, the Internet has been buzzing about one of its featured females, Apple Drysdale. The 22-year-old print and video model was born in Quito, Ecuador, and grew up in Los Angeles. Now a New Yorker, she (and her signature big curls) has been featured by the likes of V-Files and i-D magazine, and worked with some of the industry's biggest names, like photographer Ryan McGinley.

Instagram is not primarily an audio platform, so it can be hard to find solid music-related accounts. Brent Burns, founder of popular music blog Kick Kick Snare, translates the blog's focus on indie, pop, and EDM into visual form, with images that give off upbeat, candy-colored vibes. While all posts wink at musical influences--like a disco ball watermelon--they also embrace pop art enthusiasm, photoshop horrors and masters, musical puns, and more.

Nicky Ottav is modern New York's best throwback to the infamous and abrasive Party Monster-style '90s club scene. The Internet celebrity, nightlife phenomenon, and star of Christian Coppola's documentary CLUBKID, uses his nightlife gigs and social media to promote acceptance of partiers of all sizes, shapes and colors. His weekly party at Flash Factory is famous for encouraging everyone to dress as loudly, outrageously, and uniquely as possible--a standard he sets with his own intricate, fabulous, Instagram-bait looks.

An urban explorer based in New York, Shot Alive aims to show people the sides of the city to which they're not usually privy, including abandoned subway stations and dazzling, dizzying views from atop skyscrapers. Due to the questionable legality of getting to some of his fascinating, vertiginous viewpoints, Shot Alive remains anonymous. The promising, unpredictable young photographer has also worked with more recognizable (though equally inaccessible) subjects like rap artists like the A$AP Mob and, more recently, DJ Khaled.

Singer Parson James is more than just the voice behind the international hit, with Kygo, "Stole The Show." The singer, who headlined this year's NYC Pride Fest, is biracial and gay, raised in a conservative South Carolina town. He's both an inspirational and aspirational figure, using his Instagram to let fans and friends into his world. That can range from snaps from backstage, to shots of his adorable French bulldog Dolly Parson, to hanging out with famous friends like Nicole Scherzinger and Paris Hilton.

While her name might be totally new to you, Era Istrefi is one of the biggest stars in the world. The 22-year-old Albanian singer is considered an Eastern-European Rihanna, thanks to both her similar vocals and no-fucks-given attitude. Istrefi's account gives a peek into the life of a pop star who's a household name everywhere outside of the United States. But don't expect that to last long: In February she signed with Sony, and just last week released an English version of her infectious, danceable hit, "BonBon." American fame and name recognition won't be far behind.