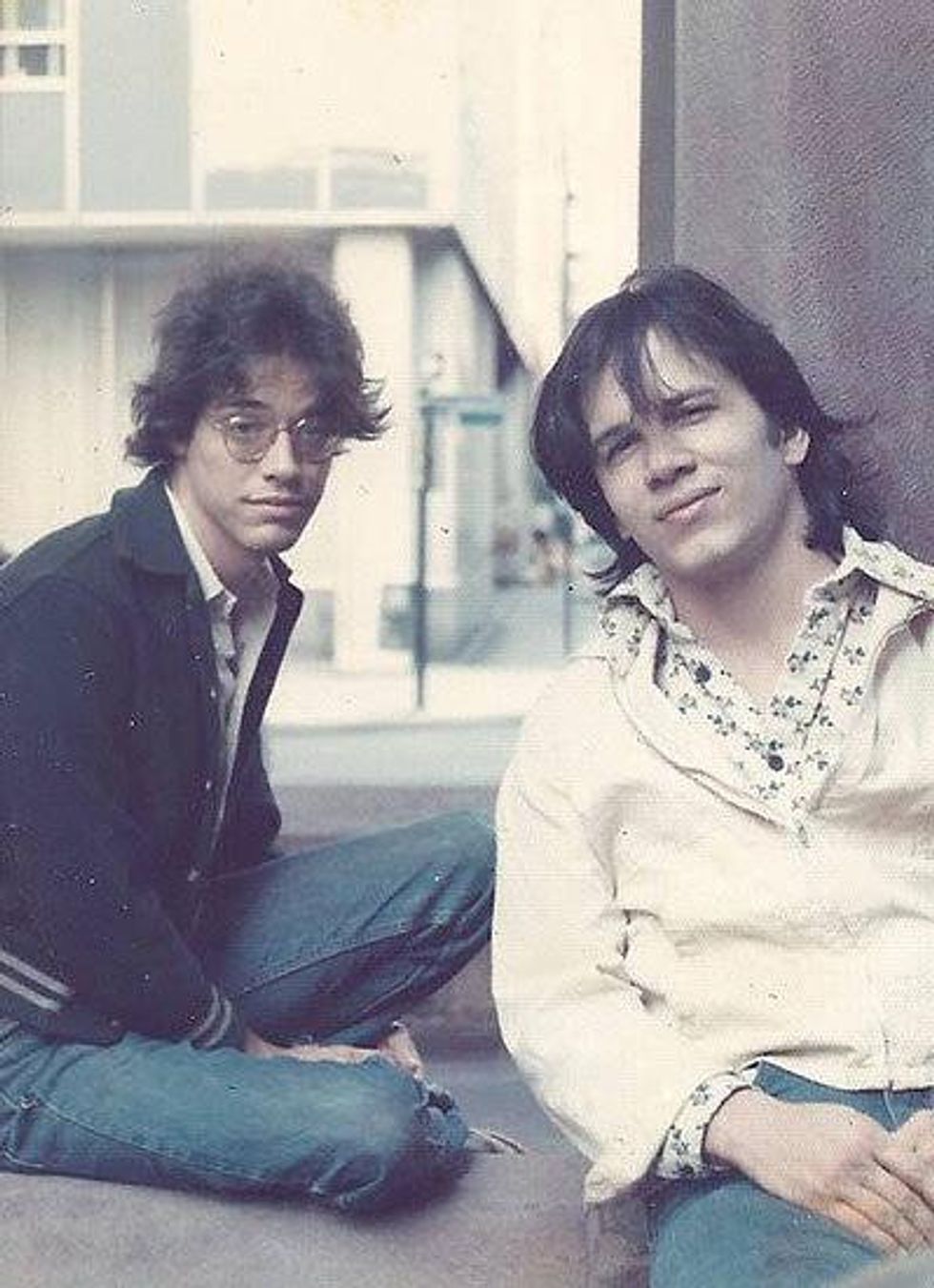 Happy Pride, everyone. To add to our bountiful cup, I'm going to tell you about 10 LGBT people who lit up the NYC night with their wonderful antics and delectable iconoclasm. Some of them are still with us. The rest will never leave us.

KIKI MASON
Pittsburgh-born Kiki (born Curtis) was a flamingly fun guy who became galvanized by the AIDS crisis, especially when he developed AIDS himself. He persuasively chronicled his experiences for Poz magazine and died, feisty to the last minute, at 36 in 1996. Kiki brightened many a club with his wit and fury.

Derek Neen, center.
DEREK NEEN
In 2009, I named Kiki's friend Derek the best doorman in town for his smooth work at Beige on Tuesdays and Splash on Saturdays. (He had also become legendary for doing the Roxy door.) As Derek told me at the time, running a good door "requires patience, an open mind, and a firm hand." He had all of that -- and then some -- and people were shocked and saddened when he committed suicide in his native Canada last year.


JOHN SEX
A glittery parody of a Vegas lounge singer, John (born John McLaughlin in Long Island) sported a shellacked hair horn and sequin-y jackets and delightfully sang "Hustle With The Muscle," backed by his drag queen-y (but female) Bodacious TaTas. The sight of John sharing a photo op with the Barnum and Bailey "unicorn" at the club Area was one of the most surreally memorable visions of that era as the two creatures playfully butted heads for the cameras. John died of AIDS-related causes in 1990.

ROLLERENA
In the 1970s, a man in a gown, cubist eyeglasses, and a magic wand glided around on skates through the ultimate disco, Studio 54. No one knew why, but everyone said, "Wow!" I hate the word "iconic," but this was truly one of those kinds of images, and in my mind's eye, he's still rolling and swirling.

Kotchever, right.
EVA KOTCHEVER
In the 1920s, a pioneer named Eva ran a feminist speakeasy downstairs at 129-MacDougal Street. A Jewish lesbian who had fled Poland, Eva hosted poetry readings, discussions, and performances at the club, primarily for those of the female gender. The sign on the door said it all: "Men are admitted, but not welcome." That sign should be everywhere.


DEAN JOHNSON
In the 1980s, Dean (and his band, the Weenies) brought humor and spunk to a nightlife scene that craved it. Just another 6' 6" bald man in a dress singing "Fuck Union Carbide," he served riotously rageful rap songs at his weekly night at the World club called Rock and Roll Fag Bar, which defiantly injected sex and sexuality back into clubbing. Dean died of an overdose in 2007, but the whole thing was deemed mysterious and in need of further investigation.

COOKIE MUELLER
Born in a Baltimore suburb, Cookie rocked the John Waters oeuvre as a campy actress and she also sparkled as a sexy, funny writer who helped paved the way for more mainstream stuff like Sex and the City. The bi icon sadly died of AIDS in 1989.

INTERNATIONAL CHRYSIS
Chrysis was a knockout beauty who was sort of a saucier, trans version of Cyd Charisse, full of glamour and high kicks. A member of the Hot Peaches theater troupe, she performed shows like Jesus Chrysis Superstar in the clubs and had a small role in the 1990 movie Q&A. She died that same year, reportedly due to problems caused by hormones.


BRUCE JOPE AND FRANCIS TOOHEY
These two campy queens did an '80s magazine called Hit Parade, which started in Boston in '78 and grew like a gay fungus. The mag had large pages that were filled with colorful chatter, gossip, interviews, travel reports, and photos from then-hot clubs like the Red Parrot and Interferon. They let me do virtually all of the above for them, and I adored sharing my innermost attempts at witticisms with their readers. It was all so glam, back when gay was a lot more fringe-y and different. And Bruce and Francis were gay-married even before gay marriage. Francis sadly passed away just last week, so please check out Bruce on Facebook and send him your love. Meanwhile, I'm sending you all mine. Let's make this Pride week extra prideful.
From Your Site Articles