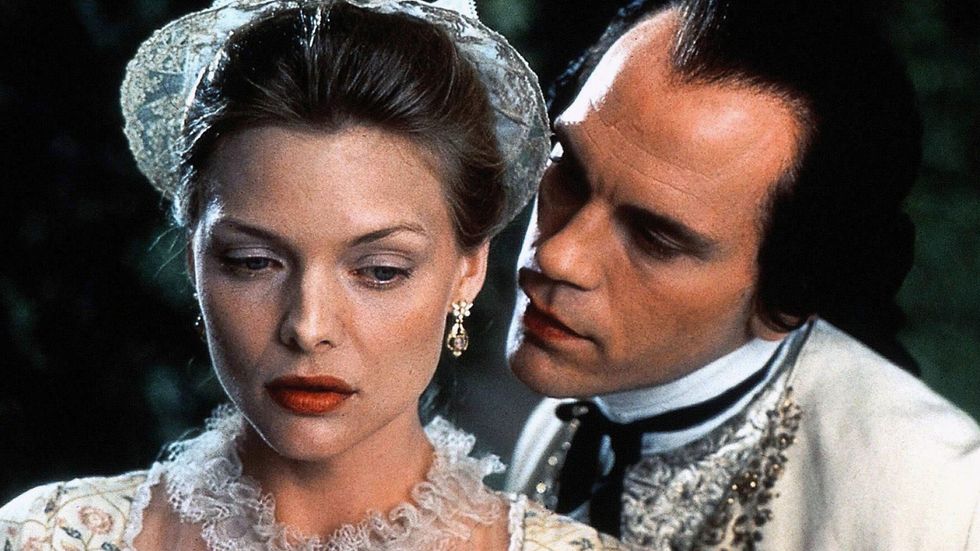 It seems like you can't open a magazine or click on a link without finding an article lambasting our contemporary dating practices in general and Millennial habits in particular (with Nancy Jo Sales' piece for Vanity Fair about twentysomethings and Tinder being one of the most recent examples). While the current dating scene can be disappointing, it's easy to forget that finding true love has been an exercise in disappointment for eons. So, next time you dip out of a date early and find yourself swiping left with only a slice of pizza for company, remember these ten films that offer visions of love far worse than #GenerationTinder.

Stephen Frears' adaptation of Pierre Choderlos de Laclos' scintillating 18th century epistolary novel paints a picture of a glittering society rotting from within, as the acidic and exquisitely bewigged team of Glenn Close and John Malkovich set out to ruin chaste Uma Thurman and Michelle Pfeiffer for their own pleasure and sexual satisfaction. (Cruel Intentions gave us a modern take on the same story, with some fierce late-90s blowouts.) After seeing the destruction wrought by the characters' beautifully composed letters, you won't mind that that cute actor-writer-drummer-waiter never texted back.

While Ashley Madison and Tinder-induced commitment phobia might seem to Say Something About Our Times, wandering eyes have plagued couples since the first caveman and cavewoman had the talk about being "exclusive." In his adaptation of Arthur Schnitzler's famous play, cinematic master Max Ophuls traces a chain of romance through 19th century Paris, with each character beginning with one partner, then moving on to another. Despite the polite period trappings, the film shows that people have always been stepping out on each other.

In Angela Pope's romantic thriller, newly-divorced Julia Ormond begins an affair with Tim Roth, a man she meets at work. The catch: she works in a prison. That mutual friends function on Tinder may feel invasive sometimes, but it can save you a lot of legwork -- Ormond has to go to the library to find out that her boyfriend (SPOILER!) murdered his wife.

It's hard to find love in the casual dating scene. It's even harder to find love in the ultra-Orthodox Jewish no-dating scene, especially when you're a teenager who's expected to marry your dead sister's husband. This delicately observed, almost Austen-like romance -- the first widely-distributed film directed by an Orthodox Jewish woman -- is a reminder that having few choices is just as tough as having too many, especially if you're not into guys with payos.

Much of the conversation about current dating culture paints men as sexually greedy emotional ciphers, carelessly picking up and discarding women, while their sort-of girlfriends helplessly wait for them to settle down. This G.W. Pabst classic flips that dynamic on its head, with iconic force of nature Louise Brooks as Lulu burning through adoring men (and women), leaving nothing but destruction in her wake.

The majority of the moral panic surrounding "hookup culture" and dating apps has focused on heterosexual relationships. But, as any queer single can attest: dating sucks for gay people, too! In Rainer Werner Fassbinder's brilliant adaptation of his own play -- itself based on his real infatuation with a young actor in his theater company -- fashion designer Petra's obsession with a gorgeous young model makes for beautifully, claustrophobically staged emotional torment. Remember that things surely won't go this badly when planning your next meet up on Grindr or Dattch. (Does anyone actually use Dattch?)

Feeling down because the person you're dating won't introduce you to their family? Dariush Mehrjui's Leila will fix you right up. Starring A Separation's stunning Leila Hatami, the film tells the story of a pair of happily married young newlyweds. When the title character learns that she is unable to have children, her mother-in-law pushes her son to marry a second wife, which slowly tears the couple apart. Never meeting your significant other's mom might feel like a slight, but Mehrjui makes a convincing case for the idea that you're actually #blessed.

The data released by OkCupid about the racist preferences common on their website is depressing, but nothing new, as can be seen in Jungle Fever in what is perhaps the best girl talk scene ever committed to film. In one of Spike Lee's loveliest and most elegiac films, Wesley Snipes stars as a married architect who embarks on an affair with his Italian-American secretary. While racism has always played an ugly role in dating and mating, Snipes' romantic woes have additional hellish layers courtesy of Samuel L. Jackson as the crack-addicted brother and Ossie Davis as the thundering reverend father.

In Liliana Cavani's cult classic, concentration camp survivor Charlotte Rampling unexpectedly encounters Dirk Bogard, the former SS officer with whom she had a sadomasochistic relationship during the war, and the two resume their twisted affair thirteen years after the end of WWII. As it turns out, coming across your ex while swiping through Tinder isn't the worst thing that can happen.