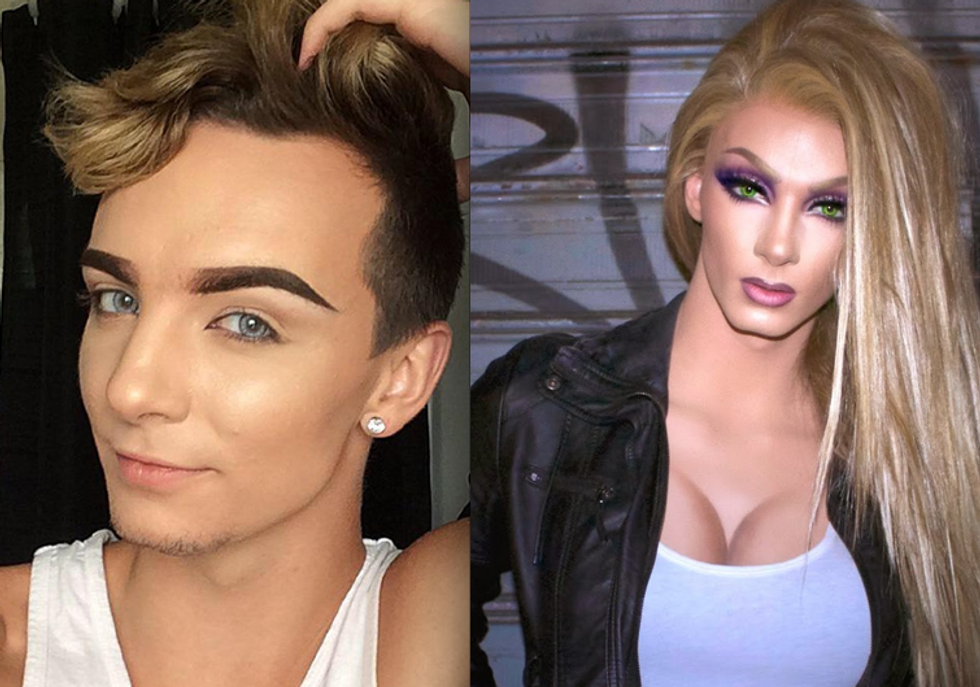 10 Drag Queens Who Are The Best Looking Men

The days when average (or worse) looking guys hid out at night in elaborate drag outfits because that was the only way they could get attention are long gone. Today's drag queens are hot men who do just fine without Aqua Net -- they just happen to like performing as hot women when the mood hits. Here are 10 of the best looking drag queens, whether in heels or flats.

PEARL
The "been-there" queen from Drag Race's last season, the entertainingly jaded Matthew James Lent, made it to the top three as Pearl, and it didn't exactly hurt when nude photos of the Florida-born performer leaked out. In fact, I bet he got bonus points.

VIOLET CHACHKI AND MISS FAME
Violet (the femme creation of Jason Dardo) won the top prize on Drag Race last time around, and it turns out he's a winner as a man, too. The same goes for California-born makeup artist/singer Kurtis Dam-Mikkelsen, AKA Miss Fame, who was on the same season and impressed with her (and his) chiseled features. As a couple of dudes, these two pals are a knockout.

L-R: Calen and his husband, Epiphany and her husband
EPIPHANY
Calen David Tomaszewski has long been a staple on the bar scene for his vocals and personality as drag diva Epiphany -- a saucy character who's also been making trips to entertain the bankrupt folks over in Greece. And Calen happens to be a swell looking figure of a male -- seeing him out of drag is indeed an epiphany.

LEXI THOMAS
A striking Barbie-type gal with great hair, Lexi is a leggy addition to Manhattan at night, and she fills it with expert contouring. I always wondered what she looks like as a guy, and it turns out that Thomas Lee Geren, he definitely adds the "sharp."

PUSSE COUTURE
A feisty drag queen, Pusse redefines couture as she gussies up for lipsynching and shtick. And as Peter Bonavita, he's cute. This Pusse rates.

COURTNEY ACT
Australian showgirl Courtney is actually a good looking guy named Shane Jenek, who's a catch whether in fishnets or not. Courtney's cabaret act includes a lot of gleefully detailed sexual anecdotes from his (and her) life, and they go down very easily for the audience because either way, he's got sex appeal.

IVY WINTERS
Going by the name Ivy Winters, she made her presence known on season five of Drag Race. But untucked and wigless, he's Michigan-born Dustin Winters, and quite an appealing sight for sore eyes. Either way, this is no Winters of our discontent.


DUSTY RAY BOTTOMS
A lively character from Pieces Bar and Boots and Saddle, Dusty turns out to be a terrific looking gent (namely Dustin Rayburn from Louisville, Kentucky) who simply enjoys exploring the other side for fun and tips. But hands off, guys -- he's in a relationship!
You May Also Like
Fashion