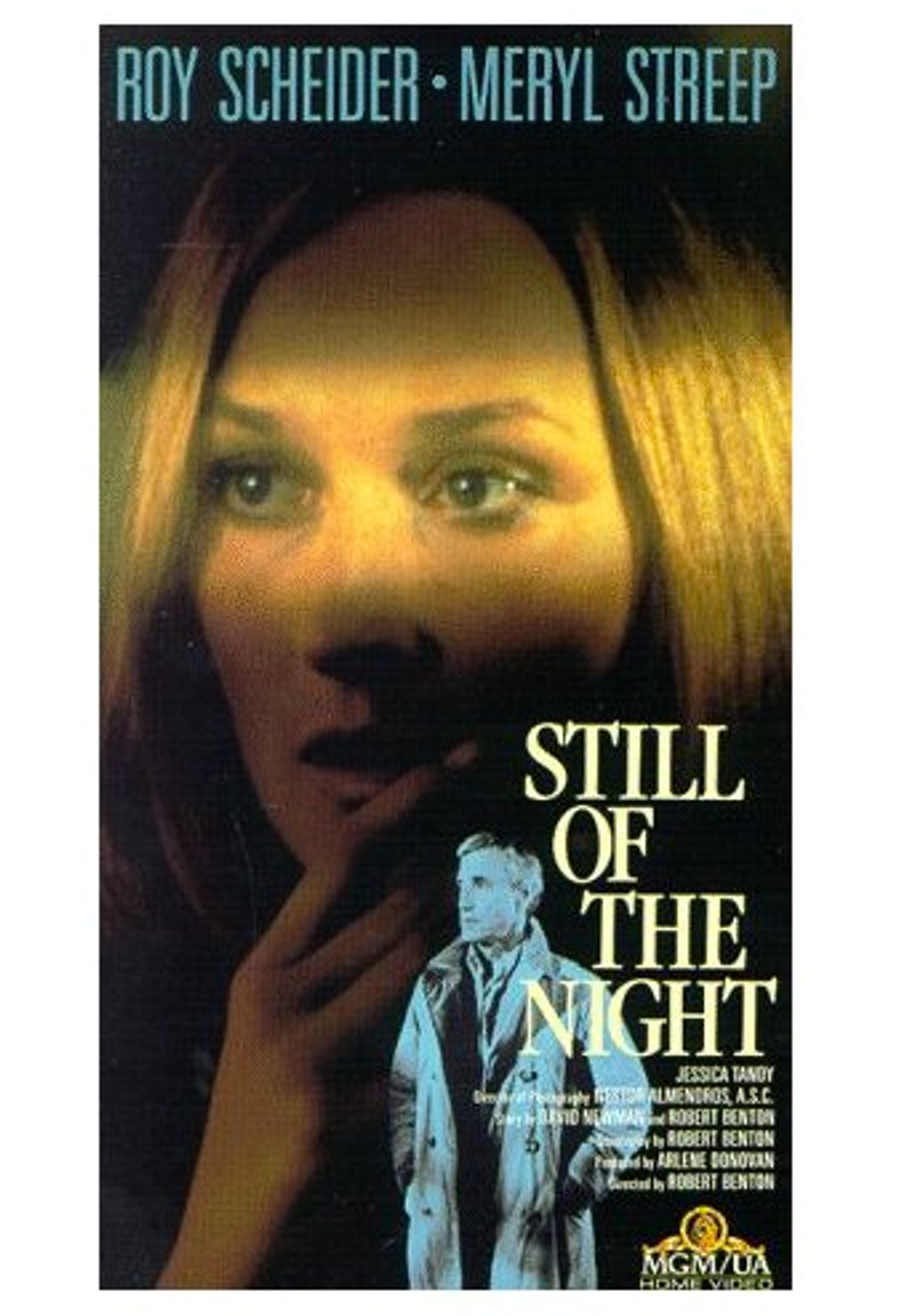 Meryl Streep can never do wrong -- except when she does wrong. Although our greatest actor deservedly has a reputation for brilliant career choices, the fact is that she's basically human and occasionally fucks up, with material undeserving or unsuited to her. Here are 10 Meryl movies that were downright not good, shockingly enough (and perhaps even more shockingly, I left out She-Devil and Death Becomes Her because I liked them, and I even found some merit in August: Osage County, though it was far from a triumph). Here comes Sophie's...I mean Musto's choices. And by the way, here's hoping her new flick, Ricki and the Flash (opening August 7), isn't #11.

STILL OF THE NIGHT (1982)
A pseudo Hitchockian suspenser in which museum curator Meryl may or may not have killed one of psychiatrist Roy Scheider's patients, this Robert Benton snoozer could have derailed Meryl's career juggernaut if people took it more seriously. Benton had led Meryl to her first Oscar in Kramer vs. Kramer, so it's obvious why she wanted to work with him again. But the result was like watching ice water freeze. "Slavishly imitative of all those B-film noir clichÃ©s" said one critic, while another swore it was "a lifeless and frustrating muddle." "It's clever but chilly," asserted the New York Times, "in the way of something with a mechanical heart." Perhaps not Still-born, but definitely not a career high for Meryl, who never worked with Benton again.

FALLING IN LOVE (1984)
Meryl reunited with Robert DeNiro for this plodding tale of extra-marital romance, but their Deer Hunter magic was nowhere to be seen. In fact, this Brief Encounter wannabe is one of the most boring movies ever made. Said Variety, "The effect of this talented pair acting in such a lightweight vehicle is akin to having Horowitz and Rubinstein improvise a duet on the theme of 'Chopsticks'."

PLENTY (1985)
A 124-minute slog based on the David Hare play about a woman who worked for the French Resistance during World War II and never recaptures her sense of glory, this was all talk, with nothing to recommend it to the public, except for the fact that a fascinating cast (including Sting, Tracey Ullman, and Ian McKellen) were buried alive in miles of dialogue. It was dreary shit -- and as Leonard Maltin put it, "The central character played by Streep is so tedious."

HEARTBURN (1986)
This urban-professional comedy couldn't possibly fail. After all, Nora Ephron, Mike Nichols, Meryl, and Jack Nicholson were all involved. So what the hell happened? I don't know, but I kept waiting to laugh -- or to care. Meryl did so much better in later comedies like Postcards From The Edge and The Devil Wears Prada. In retrospect, they make Heartburn seem like a passing fit of gas. PS: Another alleged comedy, It's Complicated (2009), comes pretty darned close, but has some good stuff in it.

THE HOUSE OF THE SPIRITS (1993)
Meryl went Chilean by way of a Danish director with this Bille August adaptation of the Isabel Allende novel about a South American family cursed with magical realism and bad plotting. It was Chile con crap! What a pompously awful mess. "Turgid, overlong, silly, hysterical," said one critic, "and that spells TOSH!" But at least the hokey House proved that Meryl and Glenn Close were two different people; they appeared in the film together, and this was before CGI.

DANCING AT LUGHNASA (1998)
Meryl's the queen of stage-to-screen adaptations [see Plenty, above], so no one was surprised when she landed a key role in this version of the Brian Friel play about five single sisters in rural Ireland. But what was magical onstage became rather limp onscreen, suffused with a cinematic glow that failed to energize it out of the bargain bin. I didn't dance out of that theater -- I marched home, depressed for my Meryl.

STUCK ON YOU (2003)
This rare Farrelly Brothers flop isn't a Meryl Streep film at all. She simply cameos in it (uncredited). But still, it's part of her oeuvre, and when she appears at the very end, co-starring in a musical version of Bonnie and Clyde's story, you have to wonder if she owed someone a favor. A semi-amiable but hardly necessary spoof about conjoined twins Matt Damon and Greg Kinnear, the film isn't grossout enough, nor is it brilliant enough, to be that remarkable. Fortunately, Meryl's bit is a scream. She elevates everything!

PRIME (2005)
In this offbeat comedy, Meryl was the Jewish therapist of Uma Thurman, whose younger boyfriend turns out to be Meryl's son. Meryl added her usual oomph to the proceedings, but the whole thing had an air of  "weird choice." Said USA Today, "This romantic comedy's predictability and rather dull love story make it the cinematic equivalent of a slightly stale hamburger." No nominations all around.

MAMMA MIA! (2008)
I know the show is a phenomenon, and the movie was an even bigger one, but so is Velveeta cheese. While I can appreciate the canny plot machinations and the giddy joy of hearing ABBA music, I didn't think this was a good piece of work, especially since some of the numbers were badly staged and occasionally you could catch a look on Meryl's face that said "Get me outta here." I empathized.

THE GIVER (2014)
No, I didn't see it, but I did see that on rottentomatoes.com, it got a paltry 36% critical rating thanks to reviews like, "Yet another young adult novel gets squashed into a bland, Saturday afternoon time waster" and "Due to its relentless action-film momentum, much of the book's central themes of humanity and love conquering all are entirely lost." But Meryl survived her role as Chief Elder, coming out later in the year as the Witch in the hit version of Into The Woods. She was Oscar nominated once again, and will nevermore make bad choices. Maybe.