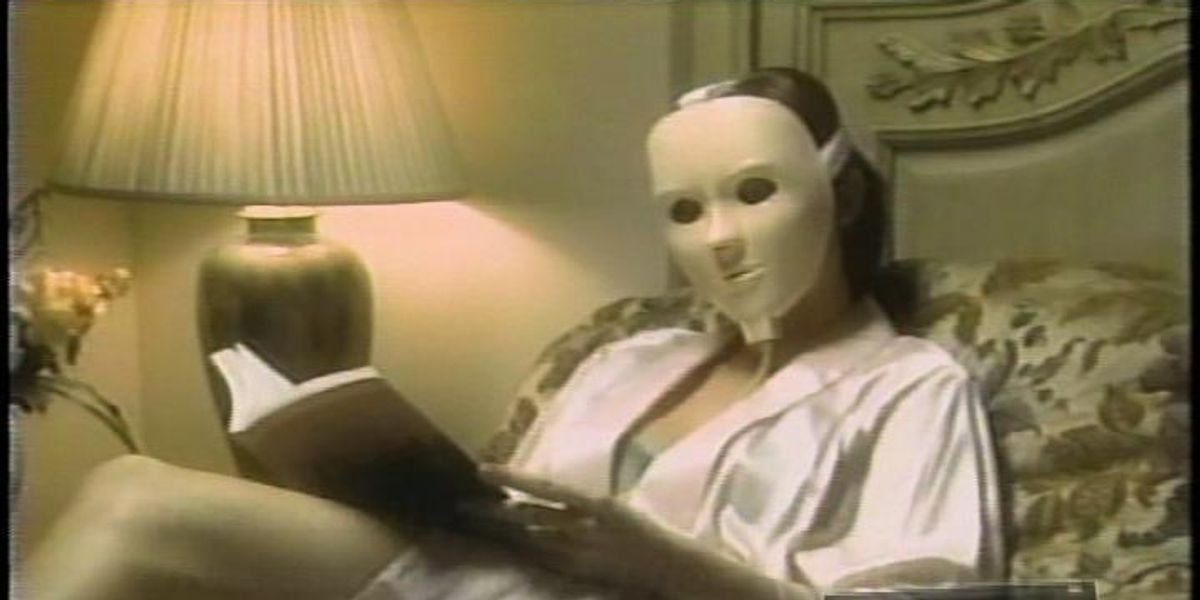 10 Gloriously Absurd (And Heinous) Beauty and Health Infomercials And Videos

The grand tradition of television infomercials--though crippled by the dominating shift in the era of social media marketing--continues to hang in its unintentionally (and intentionally) creepy, campy, insufferable legacy.

Those splendid, surreal advertisements that still exist in the static purgatory between twilight and sunrise mostly reached their peak in the 80s and 90s (some, of course, well into the aughts).

While the product is often overshadowed by the camp (or in some cases, the pretension), the blinding earnestness of these infomercials and videos is something to be honored.

It's health and wellness month at PAPER, and we're kicking it all off with 10 gloriously terrible (and just plain terrible) beauty and health informercials and videos.

Granted, this isn't an infomercial, but the Goop Empress' divine, detached narcissism was at its peak in this exercise special she did for Oprah, with trainer-to-the-stars Tracy Anderson, whom Paltrow refers to her as her "pint-sized miracle."

"I work freaking hard; it's no accident," Gwyneth says.


"Gwyneth is a dream," Anderson gushes of her client.

"I pay her to say that," Gwyneth jokes.


Not seen: Tracy mouthing "She really does, though" to the camera.

Described as "the world's first resistance toning system," the Neckline Slimmer is meant to be a substitute for plastic surgery, helping to tighten necks and chins, that often--as the ad says--"get lost" in the aging process.

While the reviews of the product are actually pretty positive, the sight of a woman beaming while silently bobbing her head back and forth to demonstrate said toning while its inventor (Paul Younane) boasts about it is undeniably unsettling, and tragic.

The device is designed so its user never actually has to move while working out.

The chair moves your lower torso in a circular motion, reminiscent of hula dancing; it's meant to strengthen your core when you're too busy at the office to make it the gym.

"Take the work out of your workout!" the ukelele-driven jingle sings.


The staged testimonials from employees of a "very busy office"-- aka a set that looks like it was filmed in a missile silo -- are a fever dream; with the actors swearing by what they're feeling in their abs while awkwardly gyrating, the ad suddenly becomes sexual in the worst way.

Referred to "the first improvement to toilet paper as we know it since the 1880s," the comfort wipe is literally a baby wipe attached to a handle, meant to cleanse your nether regions after a hearty shit.

It boasts of being economical AND environmentally friendly, reducing paper consumption, and limiting human contact with "dirty toilet paper," with a reach of 18 inches.


The testimonials, including an overweight man, and a stately women, who flicks her wrists and winces at the thought of someone helping her with her "personal matters."

Obviously, the wipe is extremely helpful to those whose motion is limited, but the actors' gleeful expressions--over a particularly sultry brand of muzak--make the ad that much more excruciating.


Possibly the most offensive infomercial of all time, Doc Bottom's (Literally, Doc Bottoms) marketed its "all purpose deodorant" with brutal vignettes, including grimy alliteration...


That, mixed with the thick Long Island accent of its creator, Adam Jay, make for a nauseating two minutes.

The climax of the ad comes when Adam says, "You can even spray ya privates!"

The 1999 ad featured a horrifying product that can only be described as a face sarcophagus...


...that uses electricity to stimulate face muscles and reduce wrinkles.

With ads that the mask is currently being sold for 70% off, it looks like the only thing Rejuvenique succeeded in doing was giving us viewers at home our first mortal glimpse of what Hell looks like.

4. The Facial Flex, with Victoria Looseleaf

Meant to tighten your facial muscles, Looseleaf clamped the device on each side of her mouth, and counted to 60 with each flex.

With her droopy, tranquilized gaze, and mid-flex ranting, it ends up seeming like some high concept peace-through-torture motif, which was probably Looseleaf's intention from the start.


The Flex is still sold today, if you're interested.

A month later, on Christmas Day, Rohrback uploaded this instructional video to YouTube, and Prancercise became a viral sensation, and spiritual movement.

Butthole-enthusiast John Mayer even had Joanna star in a lyric video for his song "Paper Doll."

The mix of unbearably awkward with Rohrback's delightfully deranged confidence, makes for a truly mystifying experience.

1. "Welcome to My Home," by Brenda Dickson

Soap icon of the 70s and 80s, Brenda Dickson, released this vanity video in 1987 entitled "Welcome to My Home," where the actress gifts us with a glimpse of her garish Hollywood home, impossibly 80s outfits, with the overall intention of tipping off the plebeians on how to pamper ourselves and exercise the right way (her way).

The most terrifying moment comes when Dickson serves racially questionable Chiquita Banana; the camera slowly zooms in on her as she (somewhat sternly) addresses her fans who "have a weight problem."

"Try and cut down on what you're eating; eat half of what you normally eat. Remember the advice that I have given you."

The endlessly parodied video was pulled from YouTube, and has since become Internet meme lore.

While her unparalleled narcissism is something to behold, her oppressively placid conviction does sort of make you think, "That looks...really nice."